So, I was browsing through the catalog for Rock Island Auction’s upcoming Premier Auction (I’ll have more next week on the various neat things available), and found one item in particular that jumped out at me as so very incongruous:

Yep, it’s a presentation-grade Volkssturm VG-1 rifle. The plaque on the stock, roughly translated, reads “To the Leader of the Peoples Army Wartheland from the Wartheland Economic Chamber of Commerce” and is dated January 22, 1945. Wartheland was an area of Greater Poland around the city of Poznań, which was taken over by Germany in 1939. The Peoples’ Army Leader this rifle was made for would have been Arthur Greiser, a devout Nazi and enthusiastic proponent the Holocaust. Happily, he was tried and convicted of numerous war crimes and hanged on July 21, 1946. 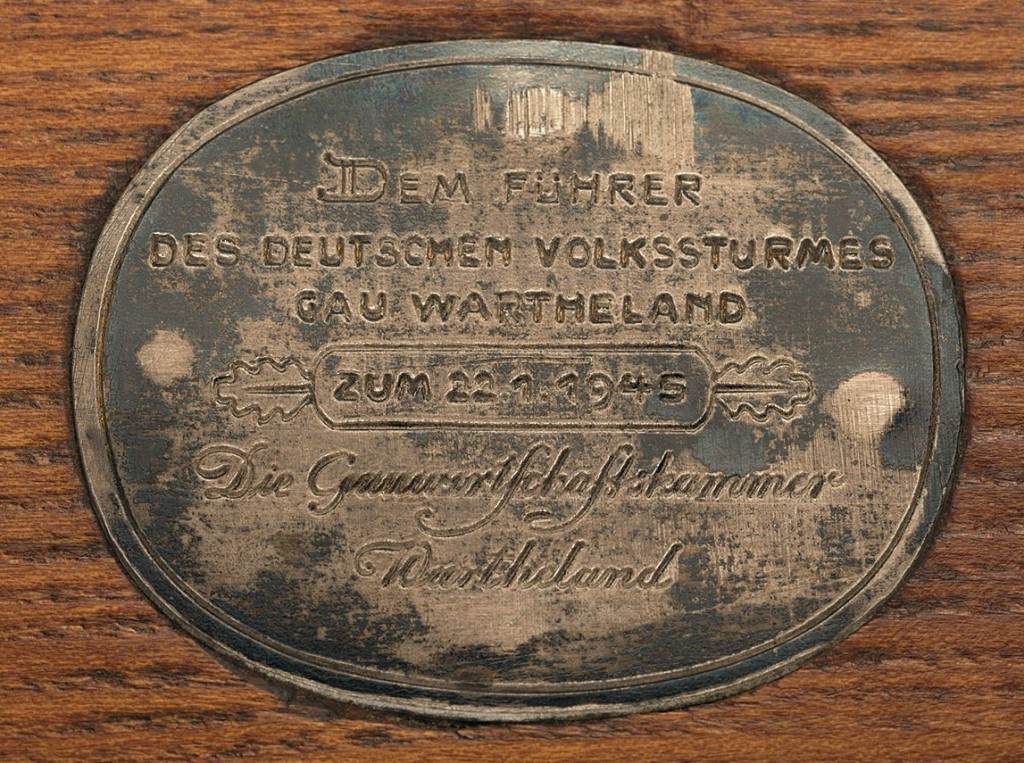 For those who aren’t familiar with it, the VG-1 was a last-ditch rifle design that really represented the last gasp of the German arms industry. They are quite valuable today, of course, as not that many survived the war, but in January of 1945 being handed one would really bring home the desperation of the German war effort. Making an official presentation of one for a senior official would be a quintessential example of attempting to polish a turd. I would imagine that simply suggesting the VG1 design to Obergruppenfuhrer Greiser in 1940 would have gotten one a quick execution for insulting the Reich’s capabilities.

In 1932, Walther made 10 custom long-barreled PP pistols for the Swiss target shooting community, sold through Glaser in Switzerland. These pistols had 127mm (5 inch) barrels chambered for .32 ACP, a fine satin “Verchromt” […]

A couple things that came in through the week… First up, Mark Serbu (owner of Serbu Firearms) has a neat video comparing the ATI .22 cal StG44 copy to an original StG44: Also, Leszek pointed […]

German sentry in Russia with a captured Mosin-Nagant M91 rifle, WWI. Note the sling swivel on the front of the magazine, and the lack of sling slots in the stock – this is a pre-1908 […]