Okay, to be precise I should say that it is W.B. McCarty’s idea for a peculiar revolver. We know nothing about Mr. McCarty beyond the fact that in 1909 he was granted a patent for a revolver concept in which the cylinder was oriented in a direction perpendicular to a conventional design: 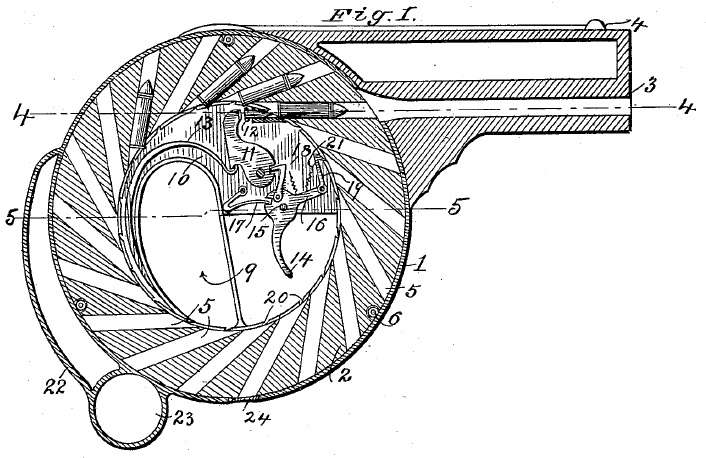 As you can see this is a bit similar to some of the turret revolvers of the early 1800s, with the cartridges pointing out radially around the whole circumference of the cylinder. What makes it quite distinct from the turret gun design is that it uses the ammunition cylinder as the structural framework of the gun, and that it uses modern metallic cartridges. The gun that is most closely resembles mechanically is the Chicago Firearms Co. “Protector”.

The body of the weapon was intended to be a cover or frame, inside which the cylinder would rotate on rollers. The center void of the cylinder would hold the trigger, with a barrel extending out one side and a buttress out the other side to form a vaguely pistol-like grip for the device. As with the Protector palm pistol, McCarty’s gun would fire in a double-action manner, with the trigger first rotating a chamber into alignment with the barrel and then releasing the hammer to fire it. The gun was clearly designed for a very light cartridge, as the only breech lock in the gun is the intertia of the falling hammer itself, rather like a Flobert type breech.

The firing method is a bit unusual, and actually similar to the Ball Repeating Carbine which we looked at earlier this week. A portion of the rim of each (rimfire) cartridge is left exposed on the inside of the cylinder, and the short firing pin hits this protruding area with each shot. Total capacity of the piece is 18 rounds, at least according to the patent drawing (those sorts of details have a tendency to change when the first functional prototypes are actually built). Loading and unloading is done one round at a time through a port located at the bottom of the trigger cavity. 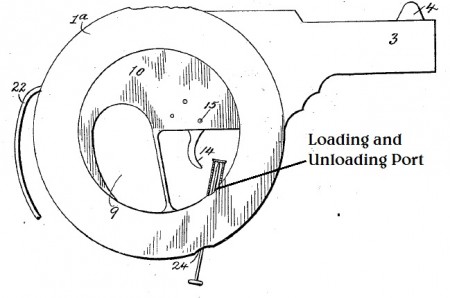 There is no evidence that McCarty was ever able to have any of his revolver manufactured…but wouldn’t it make a neat project for a home shop in something like .22 Short?

Thanks to Thomas for sending me the patent! You can download it here to read the whole description and see the other diagrams for yourself:

Today’s post is a guest article written by Mike Burns, taking a look at one of the S&W revolver copies made in Eibar for the French military. He compares it to a WWI .455-caliber S&W […]

One of the many revolver systems designed to work around the Rollin White patent was the Pant’s Patent cupfire revolver, made by Merwin & Bray in several calibers (.28, .30, and .42). This particular example […]

The Fitz Special: Art of the Gunfighter, Circa 1926