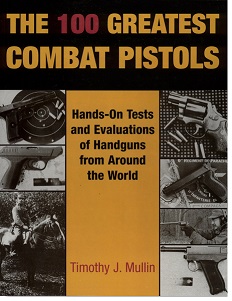 (the other two being on the subjects of rifles and SMGs/shotguns/machine pistols). Normally this wouldn’t be the sort of book that would grab my attention, but Mullin did an excellent job in finding many historically significant but generally unknown pistols to include in his testing.

What Mullin does is take pistols from the past 120 or so years and assess them from the point of view of military combat arms – which most of them were intended to be (though he does include some guns I would consider to be more pocket pistols or status symbols, like the CZ45 and Baby Nambu). Each gun is tested on a formal target range and what Mullin calls a “cinema range” – a training system used by police departments in which a movie of a scenario is projected onto an indoor firing range, and the shooter is required to respond to the situation as appropriate. In other words, realistic moving targets rather than static bullseyes. The two shooting scenarios are important because it is not uncommon for a gun to excel in one type of shooting, but prove sorely lacking in the other – and both type of shooting are relevant and important. In addition to this shooting evaluation, Mullin discusses the handling characteristics of each gun – elements like magazine changes (or cylinder reloading in revolvers), safety manipulation, sights, grip, and any other quirks of the gun that may become apparent.

What I like about the volume is (like I alluded to above) that Mullin has no qualms about comparing modern pieces like the Beretta 92, Glock, and Sig 226 to some pretty early designs, like the Steyr-Mannlicher 1905, C96 Mauser, various Webley revolvers, Type 14 Nambu, and others. It comes as no surprise that the modern guns are generally much better overall than the vintage ones, but it is interesting to see where some of the early pistols unexpectedly shined. One particular surprise for Mullin was the startlingly modern construction and performance of the Roth-Steyr 1907, which is mechanically pretty much a clip-fed Glock in an obsolete caliber.

Other old pistols that put forth impressive performances were the French 1873 revolver and the Webley Mk IV. Both are double-action large-bore designs, and while the 1873 is handicapped by its slow loading (it was truly excellent in its day), the Webley can still stand up today as a remarkably competitive combat handgun.

My biggest complaint with the book is that the photos are virtually all much too dark, and much of their detail is lost as a result. This actually doesn’t have a lot of practical impact on the information in the book, as the elements Mullin is concerned with are large and visible (grip profiles, safety catches, etc), but it would be a more enjoyable book to peruse is the photos were of better quality.

Overall, it is a very worthwhile volume for the person interested in shooting vintage (and modern) military handguns, and for the person looking for more insight into what soldiers of past years had to work with. It is definitely not a book written for the collector primarily interested in markings or variances. Being of reasonably recent publication, it can still be found new on Amazon without any trouble: