I was visiting Apex Gun Parts just the other day, and while poking through a box of magazines I came across something pretty unusual: 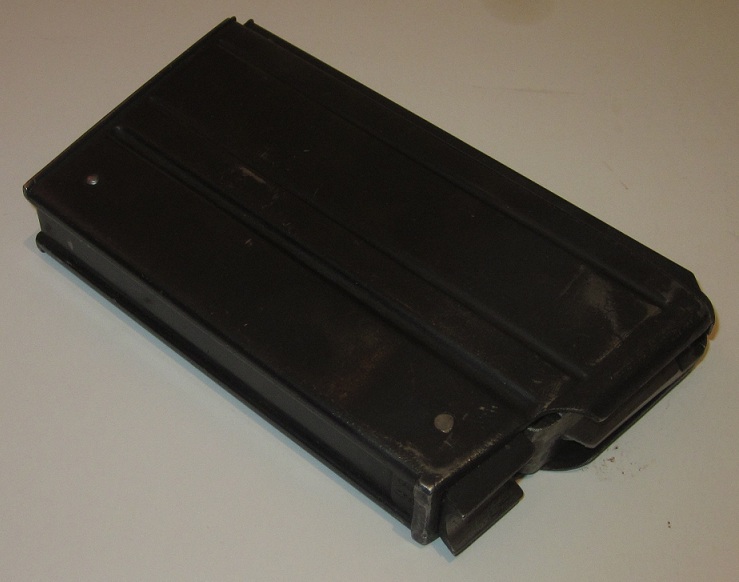 The body is clearly that of a Czech ZB26/30 twenty round magazine, but there is a nearly inch-long spacer pinned into the nose of the magazine. The follower has been shortened to fit behind the spacer, and the spring has been replaced by a smaller one to fit in the space.

So what is this? I’m about 99% sure I know. During the 1930s, the Nationalist government in China bought and built a lot of ZB light machine guns in 8mm, and during the 40s they also bought a batch of 8mm Bren guns made in Canada (which used basically ZB magazines). A few years down the road, the Communist Chinese converted some of these guns to their new 7.62×39 cartridge for ammo commonality the the standard AK and SKS rifles (see also captured Japanese Arisaka rifles converted to 7.62×39). The method I was aware of for doing this was to make a magwell spacer and use AK mags (I’ve seen ZB and Bren kits converted this way), but this magazine makes sense as a way to use 7.62×39 ammo without messing with the magazine well.

Unlike some Chinese conversion work I’ve seen, this magazine seems to have been done quite well. There is a tab on the front of the follower that runs in a slot cut in the spacer block, which should prevent the follower from binding. The spacer block is held in place by the large pins, and isn’t at all loose. I’ll have to try is out in a live gun to see if it feeds reliably, though. If the base of the cartridge leaves the feed lips before the nose of the bullet enters the chamber it could cause lots of stoppages.

At any rate, you can take a look at a whole gallery of photos here (and download it as a zip archive if you like). If you’ve seen something similar, or fired one of these converted guns, tell us about it in the comments!

The Astra 900 was a pistol developed to take advantage of a large Chinese demand for semiauto pistols with shoulder stocks, following on the massive sales of the Mauser C96 “Broomhandle” in that country. In […]

Copy of a Knockoff: Chinese Warlord Version of a Bestigui Model H

Interested in Chinese Warlord-Era pistols? My new book on the subject is now available at: https://www.headstamppublishing.com/chinese-pistols It was no secret in the international arms market that Mauser was doing a tremendous business selling C96 pistols […]

Today we are looking at a Chinese Type 56 RPD, but we will be focusing on the basic design and why it was adopted in the Soviet Union rather than the details of its use […]