Michael Heidler is a German author who has written a couple very well-researched books on German weaponry, including a massively comprehensive catalog of manufacturing codes which we reviewed a little while back. Mr. Heidler is working on a book on German Volkssturm weapons, and has sent us a sample in the form of an article on the prototype Volkspistole made by Walther (we also have a video on the Mauser Volkspistol, courtesy of the Pattern Room). So without further ado:

The most common pistol of the German Wehrmacht was the Walther P38 in caliber 9 mm. Their serial production began in 1939 by Walther, followed by Mauser (1941) and Spreewerk (1943). The model P38 was thought to replace the expensive and time-consuming manufactured standard pistol model P08. But due to the circumstances of the war this plan could not be implemented completely: In the first half of the year 1944 the German troops lost 110,092 handguns and this number rose to 282,701 handguns in the second half of the year. Such high losses could not even be compensated by all three manufacturers together.

The shortage of handguns had unforeseen consequences for the German Volkssturm (people’s storm), when the first units should get equipped in late 1944. Although the Gauleiter were authorized to receive weapons from armament factories in their districts, these weapons had to come from over-production or had to be made after an official Army contract had ran out. But this claim was only written on paper. The manufacturers had their hands full even to take care of all official orders. At the end of the day there was nothing left for the Volkssturm.

Since early 1944, Walther and Mauser tried to simplify their weapons and to develop new models. None of them went into serial production, but the gained experience benefited the companies when the call for a “people’s pistol” came up at the end of the year. Now it was necessary to produce more faster and cheaper than ever before. In addition, the weapon had to use the P38 magazines and to hit a 20x20cm target on 25 meters.

On November 30, 1944 there was a meeting between the Haupt-Dienststellenleiter Saur, SS-Obergruppenführer Gottlob Berger and other members of the Technisches Amt (Technical Department). In the process Saur got the promise for a monthly supply of 20,000 “Volkspistolen (people pistols) model Walther”. At the very next day, Berger sent an official contract to SS-Standartenführer and Wehrwirtschaftsführer (leader of defense economy) Erich Purucker, who in turn forwarded it to the Walther company. There the order was accepted as “War-Order Nr.1005 Waffen SS” on January 4, 1945.

For Walther it was hard to cope with this additional order. The production was already quite busy with the production of P38, K43, VG1 and other military equipment. Also it was getting more and more difficult to acquire all the necessary raw materials to keep the production. So director Fritz Walther wrote a letter to Purucker on January 24, 1945:

“I confirm the receipt of the above-mentioned war-order. In the meantime a decree of the OKH (Wa A Az. 72-b-35 Wa Chef Ing 4 VIa2) for procuring raw materials and supply and an order for setting up a production facility for the Volkspistole (handwritten added: 9 mm) have arrived. […] Serial production is not possible before the production facility is set up. The compulsory dates of delivery February 1945, March 1945 etc. can not be confirmed. The raw materials request to the Hauptausschuß Waffen (Main Committee for Weapons) in Berlin is released today. Please influence the Committee to allocate the required supply-rights for iron and sheet metal as quickly as possible. The order SS-4924 is classified as Dringlichkeitsstufe I (precedence rating level 1). My other productions run in the precedence rating level 0 and I have all sorts of difficulties in obtaining the raw material. And therefore I fear that the procurement of raw materials for the lower level 1  is considerably more difficult“.

As a result of this letter, Walter received a message on February 10, that the order is now classified as the highest level called “Führer-Notprogramm” (Führer emergency program). However, it remains questionable whether this had been of some use. The few surviving pistols do not suggest the start of a large-scale serial production. And on 4th April the U.S. Army occupied the Zella-Mehlis area. 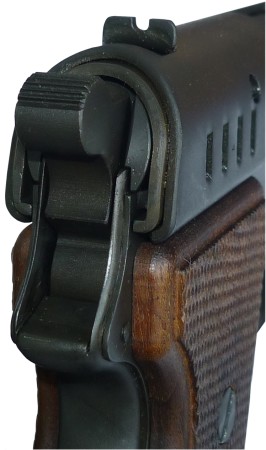 In the absence of significant documents not much can be found out about the simplification experiments with the P38. However, a few experimental pieces have survived the war and show the way to the people’s pistol “Volkspistole”. The two different simplified models are similar to the American Colt 1911 and were especially used for testing stamped sheet metal parts. Other innovations such as a rotating barrel can not be found on the Volkspistole any more.

The real Volkspistole looks similar to these experimental pistols from the outward appearance, but it is only a conventional single action weapon with blowback mechanism. Almost the whole gun is made of stamped sheet metal, except for barrel, bolt-head, springs, grip-plates and a few other small parts. Almost everything is joined together with bolts and rivets, and the spot-welded points have been reduced to a minimum. Only the wooden grip-plates are still attached with common screws. The weight of the complete gun is 1.086 kg.

The whole range of simplification becomes obvious when disassembling the Volkspistole: The barrel is retained in the frame by a hardened cylindrical plug which engages the blind hole shown in the underside of the barrel breech. When lowering the lever on the left side of the frame above the trigger, the plug retracts and the barrel can be withdrawn forward. Afterwards the slide can be removed.

The slide housing is made of two sheet metal half-shells, riveted together at the front. At the rear end they are held together by the clenching of the finger grips into slots in the inner shell. The slide housing is then positioned around a machined bolt, only connected by two lugs on the top surface of the bolt. These lugs take all the recoil forces when shooting the Volkspistole.

On the phosphated surface, there are only a few markings visible. The slide bears the Walther trademark (“Walther-Schleife”) on the left side and the safety is marked with the letters “S” (Sicher / safe) and “F” (Feuer / fire). Only two surviving Walther Volkspistolen are known today: Serial numbers 6 and 12. The former is mismatched with the barrel of serial number 4. The “105” is a postwar number, presumably to register the weapon. The other pistol has the number “14” stamped on it in the same way.

In the 70s the pistol #12 found its way back to the collection of the Walther company in Ulm, to where the former Thuringian company has moved after the war.

After several years of work and at least two Swiss military trials, Louis Schmeisser’s design of the Bergmann self-loading pistol was still not quite good enough to become a commercial success. Only a few pistols […]

This conversion kit is lot #1713 in the upcoming Rock Island May 2019 auction. In 1927, a Berlin resident named Richard Kulisch patented a .22 rimfire conversion kit for the Luger pistol. Kulisch’s conversion used […]

Yep, it’s time for another Rock Island Regional Auction this coming weekend! These are typically less valuable guns than the Premier auctions, and most of the lots include multiple guns instead of just one. Sometimes […]