The KE-7 was the product of two Swiss designers, Pal de Kiraly and Gotthard End, and was introduced in 1929 by the Swiss manufacturer SIG. It was a recoil operated design and fired from an open bolt. The guns were not adopted by the Swiss military, and were exported primarily to Latin America and China, being mostly made in 8mm Mauser. 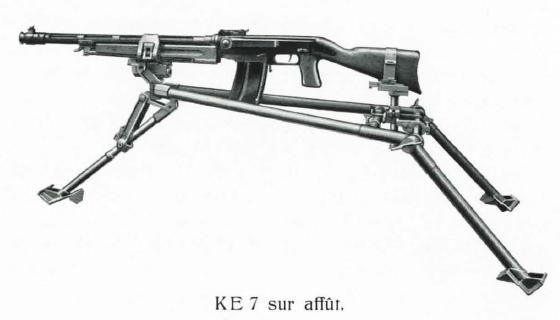 The gun did have a quick-change barrel, and could fire in either single shot or automatic mode. It didn’t use a selector switch, though – pulling the trigger back slightly gave single shots, and a further pull gave automatic fire. An interesting idea, but probably not the most practical in the stress of combat.

We have two pieces of KE-7 documentation, though  neither is in English. One is an overview of the gun in French published by SIG, and the other is a typed report on the gun in Spanish.

One of the less well known firearms in the roller-locked family of designs is the Spanish Ameli (a contraction of “Ametralladora ligera”), or “Special Purpose Assault Machinegun”. Developed in the late 1970s by CETME, the […]

The Ultimax 100 was designed in the late 1970s in Singapore as a lightweight squad automatic weapon. It’s a gas-operated design, with special attention paid to reducing felt recoil. The receiver is longer than most […]

The Holek brothers began what would ultimately become a very successful light machine gun design in 1923 with the production of a prototype gun. It was refined over the next several years and adopted by […]