I’ve been doing some reading a researching on the Spanish Civil War in preparation for an upcoming month that will be dedicated to that conflict and the arms involved in it (which include virtually everything in military use in the first half of the 20th century). One particularly interesting item just arrived last night: 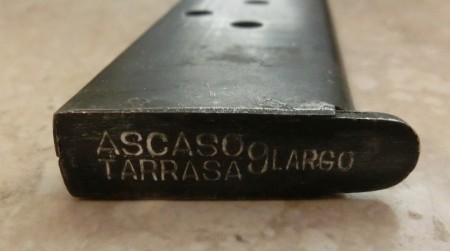 It’s the magazine for an Astra 400 copy made by the Anarchists during the war – the pistol itself will be arriving shortly. Ascaso was a noted Anarchist hero (or terrorist, depending on who you ask) who died early in the war, and a factory in Tarrasa decided to name their pistol production after him. We will get more into who he was and take a look at one of the pistols later, but in the time being there is a very interesting documentary sympathetic to the Anarchist movement available on YouTube. It was filmed at least a couple decades ago, and is largely composed of interviews with folks who participated in the war (it is in Spanish, with English subtitles). I strongly recommend it for anyone interested in seeing that side of the conflict:

I was doing some reading up on the early roller-delayed rifles (in Blake Stevens’ exquisitely technical and detailed book Full Circle: A Treatise on Roller Locking) and came across this very cool story, which I […]

ZB26: The Best of the Light Machine Guns