Developed from a weapon originally designed by a priest, of all people, in the Austro-Hungarian army, the Granatenwerfer 16 was a German WWI grenade thrower which bridged the gap between hand-thrown grenades and the light minenwerfers. Throwing a small grenade with a 400g (14oz) high explosive charge to a maximum range of about 300 meters (330 yards) , the Gr.W.16 with a practiced crew could maintain a rate of fire of 4-5 rounds per minute.

The Granatenwerfer 16 was a classic example of the spigot mortar type weapon. Rather than having a hollow barrel into which the projectile fit, it had a simple rod with a firing pin built in. The grenade it fired had a hollow center shaft, which fit onto the firing rod. To fire, a gunner (a 2-man crew, in practice) would first adjust the spigot rod to the correct angle for the desired range, depress the cocking collar until the firing pin was cocked, rotate the safety lever to the “safe” position, insert a fuse into a grenade (they were fairly sensitive impact fuses), slide the grenade onto the launcher, remove the safety pin, and fire the grenade by means of a lanyard pull. 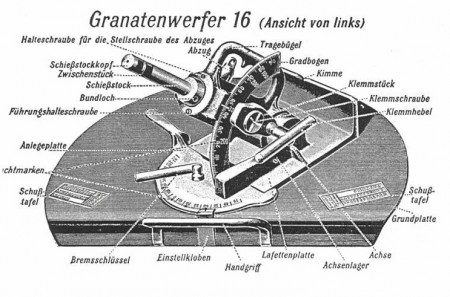 The Gr.W.16 was particularly portable because of its light weight – the launcher itself weighted 31 pounds and the base plate an additional 48 pounds. Thus both parts could be easily carried across areas too confined, muddy, or otherwise impractical to drag a wheeled minenwerfer through.

The grenade itself contained a special blank rifle cartridge (actually just a standard service round with the projectile removed), which provided the energy to launch – the granatenwerfer itself simply struck the cartridge primer to fire it.

The Gr.W.16s proved to be popular and very effective weapons for the Germans. They had a high rate of fire, useful range, and reasonable effective detonation. They could be used in either direct or indirect fire applications – direct fire was used to fire at things like sentry posts, gun loopholes, and the like. When fired this way, the grenade fragments would fill an area roughly 5m wide and 50m long, while a round fired in a high angle trajectory would have a bursting radius of about 30 meters. Minimum high-angle range was 50 meters, to avoid endangering the firing crew.

In terms of manufacturing, the Gr.W.16 was a very simple device, and easy to produce, with only a few moving parts and noting requiring the level of precision that a conventional barrel would need. This made it idea for production by companies like toy manufacturers, who had experience with casting relatively small parts to relatively loose tolerances.

A fellow on WarRelics.eu posted a number of pictures of a Gr.W.16, which I have copied here:

We also came across a copy of an original German manual for the device, which you can download:

(Note: this rifle was removed from the auction, so I have no link to provide for it) I have been unable to find any history on this particular rifle, which is an experimental mixture of […]

The Erma EMP at the Range

Having taken a close look at this original Erma EMP submachine gun yesterday, we are out at the range with it today. Like several of the interwar SMGs, the Erma was designed with a magazine […]

Lot 524 in the September 2019 RIA auction. Sweden tested the Luger in 1904, along with all the major semiauto pistols available at the time. The Luger was found to be the most accurate gun […]