In 1897, John M. Browning was awarded four consecutive patents, which covered a big swath of possible automatic pistol designs. The one we’re looking at today (pointed out to me by Rufus at SHOT – thanks!) is number 580,925, which pertains to a rotating-barrel lockup system. Yep, Browning patented that 15 years before the rotating-barrel Steyr went into production. It never went into production, but is definitely worth a look anyway.

Browning’s rotary design, unlike some of his other early pistols, has nice lines to it: 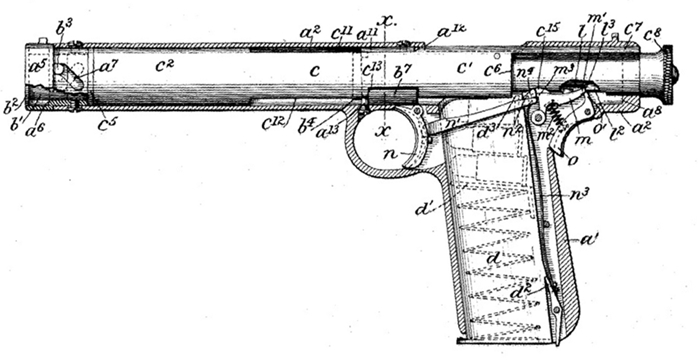 Unlike the Steyr 1912, this pistol did not use a modern-style slide. Instead, the shroud around the barrel was an integral part of the frame. It used a separate tubular slide assembly inside the shroud to affect rotation, with the barrel, equivalent in function to the slide on the Steyr. This inner tube (bolt carrier, really) held the locking lugs It used a pair of cams at the muzzle (A7 & B3) to control barrel rotation. The barrel and bolt carrier would stay locked together for the first bit of rearward motion (the precise distance required would have been determined through experimentation), and then the cammed grooves in the carrier would start to turn, unlocking it from the barrel.

The other features of the design were typical Browning – striker type firing pin, trigger wrapping around the magazine, grip safety, and even locking lugs that would blend right to other Browning designs. As a side note, it’s interesting to note that the design has no manual safety, just the grip safety. So why didn’t this go into production? I’m not sure – I don’t see any glaring problems, but I’m not an expert gunsmith by any stretch. My guess would be that Browning’s work with FN on the Model 1900 took up enough time that he just couldn’t pursue everything he had thought up.

It would make a neat project for someone with some spare time and CNC tools though, wouldn’t it?

Marlin UD-42 from the Dutch Resistance

The UD-42 was originally the design of Carl “Gus” Swebilius, who was at the time (1940) working for the High Standard company. It failed to attract interest form the US military, but was appealing to […]

I hope everyone had a successful weekend with the Rock Island auction that just ended! For those of you who still have some money left, there is a James D. Julia auction coming up in […]

I am very excited to announce today the launch of Headstamp Publishing’s fifth book, Clockwork Basilisk: The Early Revolvers of Elisha Collier and Artemas Wheeler. Written by Professor Ben Nicholson and a team of researchers, […]