When I cracked open Joseph Bilby’s 2006 book A Revolution in Arms: A History of the First Repeating Rifles, I was hoping for a history of the development of repeating rifles, and didn’t quite get that. It’s a subtle difference, but Bilby’s work is primarily about the use of the Henry and Spencer repeating rifles. 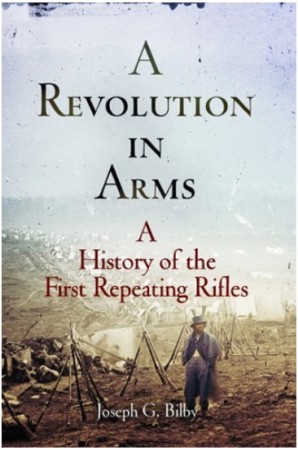 The first three chapters do a pretty good job describing the development of rifle (and cartridge) technology through the first half of the 1800s, including the Dreyse needle gun, Volcanic repeater, Sharps, Colt revolving rifle, Hall breechloader, and many more, both European and American. The fourth chapter then starts the story of the Spencer repeating rifle with a great explanation of who Christopher Spencer was and the circumstances of his invention. To me, these are the most interesting chapters in the book.

The remaining five chapters cover the use of the Spencer and Henry rifles through the US Civil War, in a way that is easily read and yet also has excellent detail. Bilby discusses each battle that involved the rifles, and how they were used by the various units. For folks interested in tactics and military history, it is an outstanding resource.

The Civil War saw a huge explosion of new firearms designs, for both repeating arms and breechloaders (new manufacture and conversion of existing muzzleloading weapons). America was a hotbed of industrial innovation, and everyone realized that the Union and Confederate armies would need thousands upon thousands of firearms – getting a military contract could provide a huge windfall for an aspiring inventor. Bibly does also discuss some of the other guns trialed during the period, and gives us a look into the mindset of the Ordnance officials running the military at the time. The obvious question at first glance is, with all these technological improvements sprouting up, why was the Civil War fought with primarily old-style muzzleloading muskets? Well, there are a number of reasons – including plain old conservatism, lack of production capacity for  the new designs, durability and reliability problems with new firearms technology, and more.

Bilby’s book also includes some really interesting details about the Spencer – like why it shares many completely interchangeable parts with Sharps single-shot rifles. That was certainly something I had not been aware of. The history of cartridge development through needle-fire, pinfire, Flobert, Volcanic, and other iterative steps is also particularly interesting and well-explained.

Overall, I would say this is an excellent book for those who are interested in the Civil War and firearms – and a good book for those who (like me) are really more focused on just the hardware. Happily, it is a still very much in print, and available for a very reasonable price. Reasonable enough to make it appealing to those of us who are only really looking for a few parts of it.

Prototype Optic on an M1 at RIA

In the years after WWII, several countries experimented with general-use optical sights on service rifles. The Germans had pioneered the concept with the ZF-41 long eye relief optic during the war (and the ZF-4, to […]

The 20mm Oerlikon automatic cannon was a mainstay of United States naval air defense during World War 2, and today we will look at a few of the characteristics and questions that apply to this […]

Remington’s Revolving Rifle: Not Expensive, but not Successful

While Colt put significant effort into developing a revolving rifle design, Remington chose to simply use their existing New Model revolver architecture. Remington introduced it’s Revolving Rifle (it had no other model name) in 1865, […]