There is a lot of Turkish surplus 8mm Mauser ammunition on the market here in the US. It used to be super cheap (under 5c/round), but in the last few years I have seen it selling for more like 30c/round. It’s usually the least expensive option for 8mm ammo, and it can be identified by its Turkish crescent in the headstamps, one-piece brass clips, and crude bandoliers (7 pockets with 2 clips in each). Whenever I am asked, I always urge people to not use it in self-loading rifles. It is safe enough in bolt actions, but that’s IT. One would be better advised to buy it only for the projectiles (or really, just don’t buy it at all).

Why? Because it’s overpressure and has bad primers (lots of hangfires), thanks to poor storage over the decades. I believe the powder granules have deteriorated and the surface area increased, leading to a much faster burn rate than when originally made, and thus excessive pressure.

Now, I have encountered plenty of people who claim to have fired thousands and thousands of rounds of Turk surplus without any problems. I have no doubt that they are telling the truth – but the very next round could well change that streak for them. I have one friend who is missing a couple fingers from an incident in which a round of Turk surplus he thought was a dud detonated while he was ramming it out with a cleaning rod – the rod took off his thumb and the bullet took two more fingers.

I am aware of at least half a dozen machine guns damaged or destroyed by it as well. Too many machine gun owners are penny wise and pound foolish, spending tens of thousands of dollars on historical machine guns and then firing the cheapest ammo they can possibly find (ie, Turkish surplus 8×57). This came to my mind recently when I noticed that a friend had a remnant from a repair job on a caliber-converted (because cheaper!) Browning 1919 that had its sideplates ballooned open by Turk 8mm. Here’s the top cover: 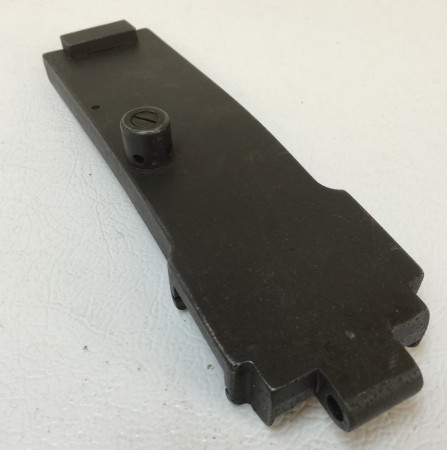 Yeah, it’s supposed to be flat.

Please, guys, don’t use this ammo. If you absolutely must, then stick to bolt action Mausers, and understand how to handle hangfires safely. But don’t let this be your 1919 or MG34 or MG42 or FN49 or G43 or Hakim. Or your fingers.

Central Powers Pistols, by Jan Still, is a bit of a neither-fish-nor-fowl book. It has many more and better quality photos than most heavy-duty reference works, but also has much more detailed information (particularly on […]

An interesting detail from a couple photos of the recent disturbance in Turkey. Take a look at the trigger guards of the G3 rifles – they have been equipped with large protective shields. I have […]

This is Lot 2493 in the upcoming October Morphy Extraordinary auction. The “cone hammer” was the first commercial version of the Mauser C96, so named for the stepped conical sides of its hammer. The C96 […]