The Schwarzlose machine gun was developed by Andreas Schwarzlose starting in 1902, as an attempt to produce a machine gun simpler and less expensive than the guns then on the market. Schwarzlose achieved this end by using a delayed blowback action, very unusual in machine gun designs. By using a heavy bolt and a lever-delaying system, the design was able to avoid the necessity of a gas or recoil system and its attendant extra components.

The Schwarzlose uses a toggle lock that looks at a glance similar to a Maxim or Luger lock, except that this toggle does not act to lock the bolt. Instead, the toggle must be broken and folded before the bolt can travel rearward, thus delaying it for a moment. This delay is long enough to allow chamber pressure to drop to a safe level (assuming everything is done right). This does require use of ammunition with a specific pressure curve, as overpressure ammunition will cause the bolt to open early and rupture cases while underpowered ammunition will simply fail to fully cycle the action. The system was designed with a heavy recoil spring and a relatively short barrel (20.75 inches, meaning that the bullet would take less time to exit the barrel and pressure to drop). This meant that the gun had significant muzzle flash (hence the large flash suppressor) and also required an oil pump to lubricate cartridges to prevent extraction problems. The pump oil tank held a half liter of oil, which was good for about 4500 rounds of firing. 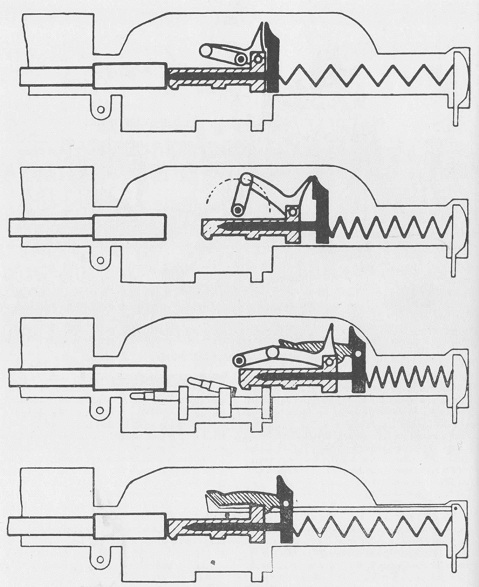 Along with those disadvantages, the gun did have some things working in its favor. Since the barrel did not move (like most contemporary recoil-operated actions), it was simpler to incorporate and seal the cooling water jacket. It also had a very sturdy and reliable feed system. In 1912, the design was modified to use a heavier bolt and spring (and slightly modified lever angle in the toggle), thus increasing the time before opening, which reduced the chamber pressure when it did open, which in turn allowed cartridges to reliably extract without being oiled. The most obvious visual distinction between the 1907 and 07/12 guns is the rounded hump on the from of the 1907 receiver, where the 1912 variation was square at the front of the receiver.

The gun loads from below and right of the receiver, and ejects empty cases out the lower right of the receiver. Loading the gun when empty requires inserting a belt and manually cycling the action three times while holding pressure on the loose end of the belt to bring the first cartridge into firing position. The feed mechanism consists of a gear-like wheel that holds the cartridges and rotates them up to the chamber and then down to the ejection port. Firing is done by depressing the central dual triggers between the gun’s handles. There is a safety located between the triggers, which must be held to the left by one thumb while firing.

The Schwarzlose was the standard heavy machine gun of the Austro-Hungarian army during World War 1, and was also adopted by the Czechoslovakian, Dutch, Serbian, Romanian, Bulgarian, Turkish, and Swedish armies. Italy captured a significant number of the guns, and used them both during and after WWI. Dutch and Czech Schwarzlose guns were chambered for 8×57 Mauser, while the Swedes used them in 6.5x55mm, and the standard Austrian chambering was 8x50R (later changed to 8x56R). Some guns were build in 6.5x54mm for Greece, but these were appropriated by the Austrian government when war broke out in 1914.

The Steyr company in Austria purchased the manufacturing rights for the gun in 1905, and built them until 1918. In 1931, Austrian guns were modified to use the new 8x56R cartridge, which provided a significantly higher muzzle velocity (2300fps, instead of about 1900-2000 with the 8x50R). This was done by rechambering the existing barrels. The British company Kynoch also built the Schwarzlose under license as the Kynoch Machine Gun. A number of other smaller-production variants were also made, including cavalry and aircraft guns.

The Steyr-Hahn is one of the less glamorized pistols used in WWI, despite being made in quite large numbers (250,000-313,000, depending on who you read). The gun is an interesting mix of features, including bits […]

We really liked the last book we reviewed by Paul Scarlata (German Gewehr 88 “Commission” Rifle), and so we decided to grab another one off the shelf. Today, it’sMannlicher Military Rifles, and Scarlata does another […]

Rudolf Frommer was a self-taught engineer and firearms designer who worked his way up through the FEG concern in Budapest to eventually hold the position of CEO. During this time he developed a series of […]