A few weeks ago, I wrote a post about a series of pistols designed by a German inventor named Claus Claudius, which began with a long-recoil design in 1895. He then progressed to a floating chamber design in 1900, and finally a fairly conventional short-recoil design in 1905. We found a book with photos of the 1895 version, but it was claimed that the 1900 was never actually built, and we had no information on the 1905 beyond its patents.

Well, a fellow named Christian in Finland sent us some photos of what appears to be a prototype of the 1905 Clausius design – it’s certainly too close to the patent drawings to be a coincidence. 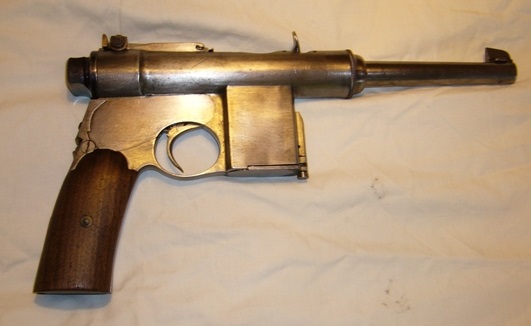 As Christian explains, the pistol belongs to an elderly Swedish gentleman who received it as a gift from a Swedish army officer in the 1960s. That officer apparently bought it in Germany at some point and brought it back to Sweden in 1932. That time frame and geography would fit with it being a Clausius gun. However, there are some details of the gun that bring up questions. For example, the magazine floorplate is held in placed by a protruding screw, and the hole for that screw was drilled much too close to the edge of the magazine well, resulting in it nearly breaking through when threaded:

That sort of thing is not what you would expect from a competent gunmaker (or machinist of any specialty, for that matter). In addition, the pistol is completely devoid of any markings, including proof marks. That pretty effectively guarantees that it was not a commercial gun, which leaves the possibilities of a home shop one-off (perhaps a proof of concept?) or a factory prototype.

More photos of the pistol:

Perhaps Clausius build this prototype himself as a proof of concept sample, or hired out its construction to a not-really-great machine shop he had some connection to? Perhaps he was trying to sell the patent to a more significant arms factory? Perhaps Clausius had a son or friend who decided to build one of the guns and had access to the plans? Unfortunately, I doubt we will ever know.

I’ve gotten to take apart an original second model FG-42, and play with an SMG reproduction second model (and shoot against one in a 2-gun match), but I’ve never gotten my hands on an original […]

The Sturmgewehr 45 (aka Gerat 06H) was the first functional roller-delayed blowback rifle developed, and it was slated to replace the StG44 as Germany’s primary combat rifle when WWII ended. We have a reproduction of […]

Yep, it’s time for another Rock Island Regional Auction this coming weekend! These are typically less valuable guns than the Premier auctions, and most of the lots include multiple guns instead of just one. Sometimes […]