A machine gun trumps a rifle and, in theory, artillery trumps a machine gun. That was the plan when France introduced the model 1916 37mm  gun for infantry support. It was designed for both direct and indirect fire, and intended primarily for destroying machine gun emplacements. It turned out to be somewhat wanting in this role, and mortars really did a better job. But that didn’t prevent it from being pretty widely used by both American and French units, and other nations after WWI. It also saw use in the early U M1917 tank. 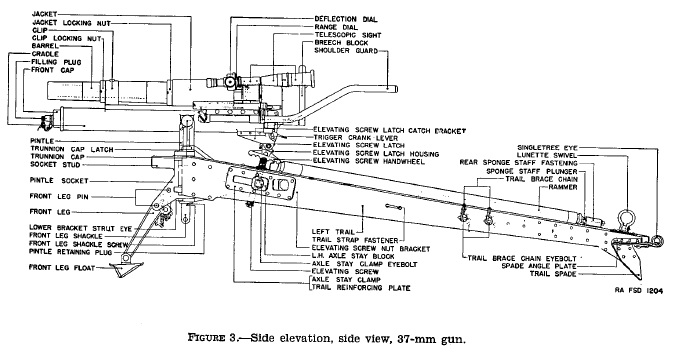 The M1916 used a hydraulic recoil buffer with a spring recuperator – thing of it like a big motorcycle shock absorber – to make firing controllable. It was used with both the fixed tripod above and also with a couple types of wheeled carriage. It would be broken down into manageable loads for three men. 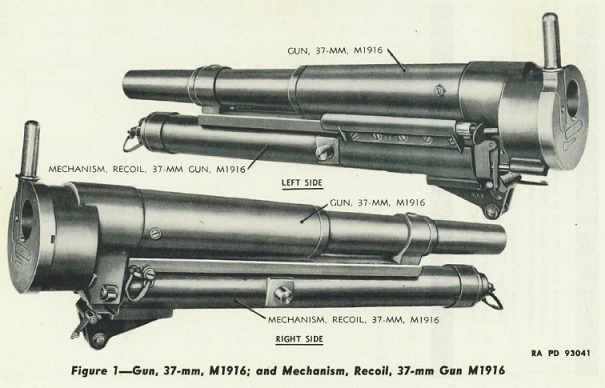 The biggest downside was the poor ballistic performance. Initially it was provided with an HE shell and a solid steel projectile. The solids were ineffective, and were later replaced with an iron shell filled with black powder. The US still had a bunch of these in supply at the beginning of WWII, though they were largely used for sub-caliber training.

We have added a Vault page on the M1916 37mm gun, and have a number of vintage photos of this piece as well as a copy of the US Army manual for it and the Ordnance Parts Catalog listing all the formal names for its components. Check ’em out if you would like more information…

Long associated with Parisian street gangs called “Apaches” (after the American Indian tribe), there were two main patterns of combination knife/knuckle/firearm made in the mid/late 1800s in France. This one was designed by J. Delhaxhe, […]

Today, we are taking the PGM Precision Hecate II out to the range. It is a rifle designed for use out to 1800m, but I have neither the skills myself nor the range facility to […]

This didn’t come out as well as I was hoping (one of the stage videos got corrupted and the others don’t show the shooting stages as well as I’d anticipated), but I will do better […]