When a new weapon model gets to the front, there is always a risk of it getting captured by the enemy. Armed forces go to great lengths to avoid it. For example, when the USSR carried out comparative tests of the Sudaev submachine gun (PPS) and a new version of the Shpagin submachine gun (PPSh-2), Stalin personally signed an order commanding that tests are carried out in the rear with the units recalled from the frontlines that have combat experience. Regardless, the order was violated and Sudaev’s submachine guns were tested in the battles near Leningrad.

Undoubtedly, Germans took similar precautions. So who and when captured the first German Maschinenkarabiner 42?

Some Russian sources claim that the first MkB were captured back in March 1943. However, this information has yet to be confirmed by any documents. Conducting my own research in the Central Archive of Russian MOD (known as TsAMO), I found a report dated June 1943 (source: fund 81, case file 87, “Correspondence on foreign small arms”), which allows us to re-establish the timeline of capturing the first Maschinenkarabiner 42. It reads as follows:

“To the Head of GAU KA (Main artillery directorate of Red Army). I am sending lieutenant-technician N.N. Troitsky to deliver a German automatic carbine and 4 cartridges for it, which were captured at the 22nd Army’s sector near the city of Holm in June”.

We then find the MKb42(H), serial number 1334, in the Soviet test shooting range documentation, where the carbine arrived in early July. Peculiarly, it only had 3 rounds by then. Apparently, one cartridge was immediately forwarded to the ammunition specialists. This MKb42(H) went through preliminary research and testing in July 1943. Since the three original cartridges were not remotely sufficient for any testing purposes, the range were ordered to manufacture 500 rounds of compatible ammunition “by re-crimping German shells and trimming bullets” on site. 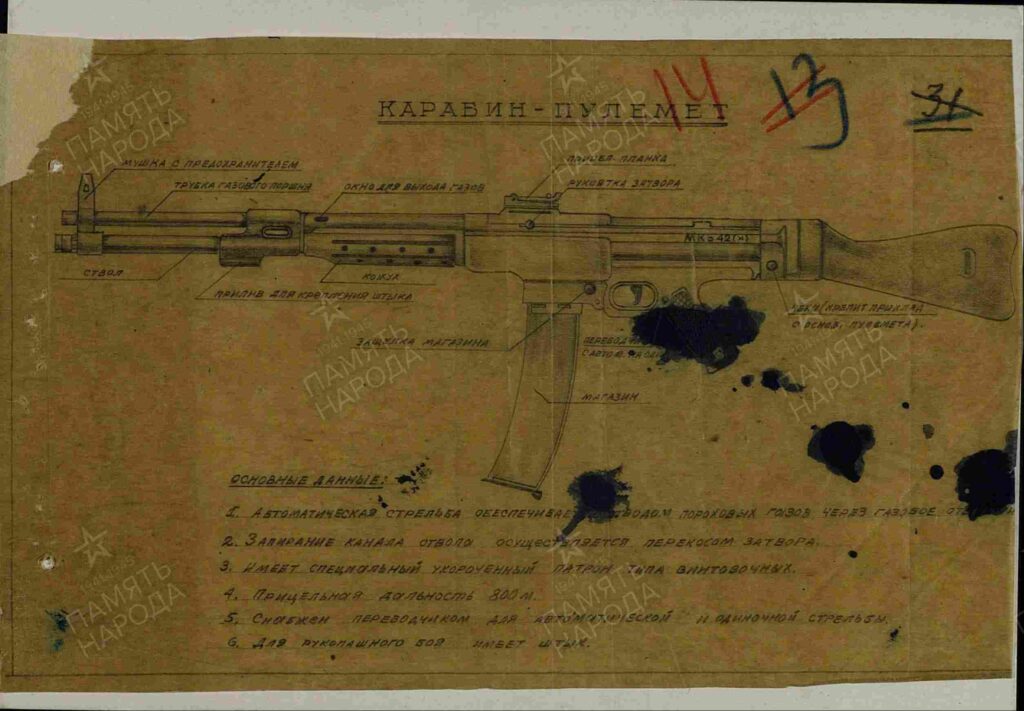 Dieter Handrich’s book “Sturmgewehr! From Firepower to Striking Power” indicates that military tests of MKb-42(H) was ordered in April 1943. As a result, about 2,000 units were sent to Heeresgruppe Nord, intended for the following divisions: 1st, 11th, 21st, 93rd, 212nd infantry divisions and 18th Panzergrenadier division. In fact, the actual list was slightly different. For us, the most interesting detail is that the 93rd infantery division received 213 Maschinenkarabiner, of which 7 were lost already in June 1943 (source: NARA T-315 R-1167 and T-312 R-600).

As you have probably already guessed, the 93rd Infantry Division were located in the area of ​​the city of Holm, facing the Soviet 22nd Army. The front line in this area was relatively stable so sending a batch of new weapons here for combat testing surely seemed like a great idea to the German command. However, the Germans did not consider the high activity of razvedka, the Soviet field reconnaissance units in this area. Not unlike the US Army Rangers, these ghillie-suited highly trained operators, often with Siberian hunting experience, routinely carried out raids deep behind enemy lines to scout fresh intelligence on the enemy forces and bring back live prisoners for interrogation. Their secondary objective was to prevent their German counterparts from doing same.

In one of the reports of the 22nd Army, I have discovered the following episode:

On June 22, 1943, a group of 820th Infantry Regiment scouts led by 2nd Lt. Arkhipov discovered an ambush set up by a German reconnaissance unit. Supported by an infantry platoon under the command of Lt. Ivushkin, Soviet scouts attacked the group, eliminating 12 German soldiers and capturing three (two obergefreiters and one private). According to Soviet field report, the group belonged the 1st Battalion, 272nd Regiment of the 93rd Infantry Division. The report also lists “four machine gun carbines” as trophies.

During the subsequent interrogation, the captive Hugo Hinsche indicated that a special battalion reconnaissance platoon was formed in the 1st battalion of the 272nd grenadier regiment in May 1943. The platoon comprised 27 people armed with “machine gun carbines of the 1942 model”. It can be said with high degree of certainty that it was the razvedka of Soviet 820th Infantry Regiment who became the first Allied soldiers to seize a sample of this highly sought-after German weapon. The history of the 43rd model cartridge, Kalashnikov assault rifles and everything else begins with these people.

East German Mosins – or not…

One of the things that makes Mosin Nagant rifles particularly interesting to a lot of folks (myself included) is their tendentcy to appear in a vast number of conflicts all across the globe. Guns originally […]

Vintage Saturday: Not for Squeamish Collectors

When the German attack into Russia stagnated in late 1942, some areas of the front returned to a trench-and-sniper sort of warfare that was reminiscent of World War One. The German military actually went so […]