One of the very first things I posted here on Forgotten Weapons was an article on a French rifle called the Hagen (it was designed by a Norwegian). I posted an article on it written in French by Jean Huon, but wasn’t able to read it. Now, thanks to reader Thibaud, we have an English translation of the whole piece. I did some editing to clarify parts where I could, but there are still some places that are a bit confusing. Still, this was quite a lot of work to translate and transcribe – thanks for taking the time to do so, Thibaud! 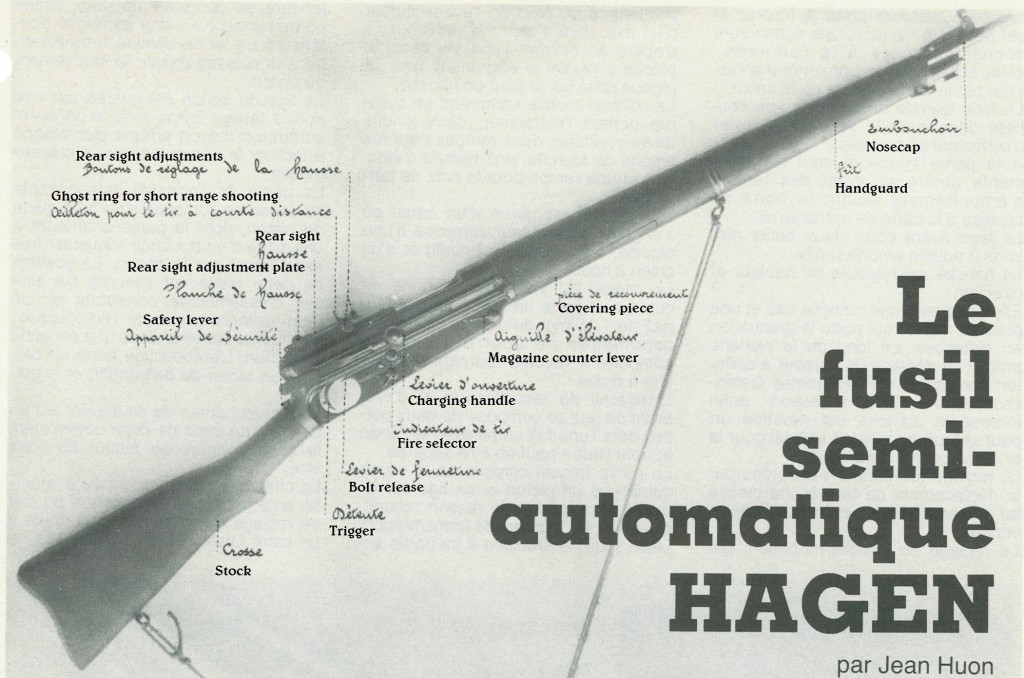 Studies of documents from several archives and documentation centers of the French Army show that many tests concerning semi-automatic rifles had been done in our country since the end of 19th century. There was both tests models developed in our own factories and foreign prototypes. Among these was the Hagen rifle.

This firearm was created by a Norwegian gunsmith, but many details make us think it was constructed in Great Britain: the similarity of the stock to Lee Enfield for one, markings “on” and “off” on the magazine cut-off lever, and pressure indicated in pounds per square inch.

That ammunitions arrived for the Committee on April 23, 1912. Tests executed by the Committee focused at once on the rifle and on the powder used as propellant for the cartridges. Tests were recorded in a report written on July 26, 1912 and we recognize among signatures from the Committee that of M. Chauchat, who would go on to design the M1915 automatic rifle in three more years.

The following description is intended to remain as close as possible to the original report, from which we borrowed large sections.

The rifle has these parts:
The frame, the receiver, the bolt, barrel, the gas piston, and the feed mechanism.
The frame consists of three parts: a permanently fixed barrel, the mechanism box with flying and butt plate; drum or handguard pierced by two cylindrical holes surrounding the barrel and the unit borrowing and gas which is mounted the sling; and a return spring.
The receiver has the general form a hollow rectangular prism; the top surface holds the rear sight and is pierced in front to allow the cartridge to pass through ; this piercing is elongated backward by the « nut » guiding groove. Right side holds the track for the charging handle.

On the underside is the assembly system which connects the slide-frame and the receiver.

The rear sight is adjustable for elevation and windage. It is composed of a fixed plate and a movable piece, which is graduated for distance shooting. On this ladder is an aperture which is locked at a selected distance by a spring loaded mechanism. When this graduated ladder is collapsed, shooter can use a specially designed ghost ring for very short distance shooting.

Elevation adjustment is controlled by moving the movable piece using a click-adjustable screw.

Windage adjustment is obtained by pivoting the fixed plate around an axle that is located on its front first quarter. It is operated by an endless screw linked to a cog-wheel machined in front of the fix plate of the rear sight.

The bolt is a cylinder with extractor, two locking lugs, two grooves for the fork’s lugs, one ejector groove and one groove for the firing pin’s nut.

The cylinder is pierced and inside is located the firing pin composed of a spike, a spring and a nutted hammer.

The barrel is screwed into the receiver and has a gas port of 1.15 mm diameter located 9 cm behind the muzzle. The barrel rifle is 4 lands and grooves rotating clockwise.

The gas piston system is composed of two parts, one of which is permanently attached to the barrel and the other is detachable. The part integral to the barrel constains the piston and its guide rod on which is mounted the return spring and the transmission fork. This fork is articulated on its front part and contains two plates, each of which has a lug linked to the slide and that allow the piston to transfer its movement to the slide.

The piston runs in a tube permanently attached to the barrel, and contains a flat spring that is intended to facilitate disassembly of the bolt [or slide, maybe].

The part that is not attached to the barrel is composed of a guide tube with a kind of mouth piece on its front end that is exactly adjusted to the canon. Assembly is done with an assembly key consisting of a semi-cylinder which is hold on the nosecap and a groove on the barrel. The nosecap holds an articulated piece, a bayonet lug and the front sight.

The upper part of the front sight is located in the center of a flat-conical piece defining the dangerous zone around the target.

The firing and feeding mechanism is held in the receiver. The feeding mechanism, placed on the front part, is composed of a spring loaded elevator. It is locked by a plate and a lock and the elevator is composed of a plate with a hook on its rear part, a lever with a flat spring and a spiral spring activating the lever, leaning on the bottom plate.

The floorplate can be opened to unload the magazine. A display arm and graduations are placed on the right side of the receiver to show how many rounds are left in the magazine.

The firing mechanism, placed in the rear part of the receiver, is composed of a hammer worked by a spiral spring, a trigger with its coil spring, a sear with its two small coil springs, a bolt release lever, an ejector, a fire selector, and a security lever that can lock the trigger.

The trigger moves around an pin and, thanks to its elongated hole (around the pin), it can also move vertically. It contains a part that acts on the sear. The coil spring mounted on the pin and on the trigger can work both by pulling and twisting.

The front of the sear contains a kind of hook that acts on the hammer and its middle part has a “grip” to connect with the rear part of the trigger.

The bolt release lever allows the breech to be closed by a trigger pull or manually when the rifle’s semiauto mechanism is not in use.

The fire selector allows the rifle to be used in either semiauto or manual modes.

The mechanism frame (lower receiver) attaches to breech frame (upper receiver) using two lugs, front and rear. The rear lug is composed of two parts, of which the rear one, which serves as a wedge, can be removed with a screw. This allows the lower receiver to move forward and backward against the breech frame and, then, disengage the lugs from their housings.

The safety mechanism is composed of a semi-cylinder which can be placed with either the flat or the round side against the sear. When the round side is against the sear, it can not move backward and thus the hammer cannot leave the cocked position. A flag shaped indicator shows “off” (open) or “on” (closed) to alert the shooter to the state of the mechanism.

The weapon functions either in semi-auto or manual repeating mode according to the shooter’s choice and indicator’s position.

When it is in manual configuration (“S”), the ejector acts as a bolt stop and the bolt stays to the rear after each shot. The ejector retracts when the bolt release lever ahead of the trigger is used.

When it is in semi-auto configuration (“M”), the ejector is turned downward, which lets the bolt move freely. The ejector moves upward only after the last round is shot and acts as a bolt hold-open.

When the rifle is loaded, cocked and its bolt is locked open, the shooter must release the breech with the bolt release lever. The shooter pulls the trigger, the sear operates, and the round is fired. When the bullet has passed the gas port, a part of the gas goes into the cylinder and pushes the piston backward. The fork moves the bolt, which is unlocked and moves backward. The spent cartridge case is ejected.

When moving backward, the bolt re-cocks the hammer, which attaches to the rear part of the sear while the piston compresses the return spring. End of the backward movement.

The return spring is then released, the bolt moves forward, and a new cartridge is fed into the breech. The bolt has two lugs, and rotates 30° to lock.

Testing of the Weapon

There was testing for functioning and ballistics. Ballistics testing intended to measure velocity, trajectory, and accuracy. This was done in comparison with rifle Mle 1886 M93 (Lebel), firing the Mle 1886 D (type ECP 192) cartridge.

Trajectory was measured under normal atmospheric conditions (t=14°C and P=750 mm) with 20 cartridges.

Accuracy was measured at 200 meters (220 yards approx), firing in single shot mode from a rest. Two shooters fired two series of ten shots each. Accuracy testing from rests was also done at 400, 600 and 800 meters.

We obtain the following results:

Accuracy at 200 meters is quite equal between the two guns.

This shootings was done from a rest. It consisted of 200 cartridges shot in strings of 50 with pauses from 25 to 45 minutes, allowing the rifle to cool down. After the 200 shots, the gun was stripped and cleaned entirely.

The weapon was severely fouled, especialy in the breech and the locking lugs. It has been noted that bolt and fork were severely worn on their contact surfaces.

After complete cleaning, 200 cartridges were planned to be shot. After the second shot, the gas piston broke near the fork. Testing was then stopped.

At that point it was still possible to use the rifle as a manually operated weapon, but the operation was quite difficult because of the requirement to pull both on the bolt and operating the bolt release lever.

In its report, the comittee expressed various opinions on the Hagen rifle.

The cartridge has a rimless centerfire case made of brass. It has a boxer primer and measures 56.5 mm in length. The cylindro-ogival ball is maillechort jacketed lead, weights 9.72 grams (150 grains) and measures 29 mm. Powder is 2.81 grams (43.4 grains) of tubular grains. Complete cartridge is 23.35 grams (360 grains) and 78 mm long.

This allows us to identify it as a 7 mm Mauser.

Results of this testing show that the French Army was interested in all news in armament technologies. We nevertheless note a reluctance at giving troopers a semi-auto weapon. We also must say that at the same time our (French) manufacturers already produced excellent prototypes of repeating semi-automatic rifles and, if we really wanted to adopt this kind of equipment, there was no need to adopt a foreign design.

Scan of the original text:

Lot 252 in the September 2020 Premier RIA auction. Nicolaus-Noël Boutet is one of the most significant gunsmith artists in the world. He was the “directeur-artiste” of the Manufacture d’Armes de Versailles, set up in […]

The 37mm gun was found in many guises during World War One – that caliber was the smallest allowed to use exploding projectiles by the 1899 Hague accords. Every nation in the world, it seems, […]