A little while back, I got another of those interesting emails with a handful of photos and a note saying:

I have a friend that has a gun I can not identify. I asked Grant thinking with it being some type of revolver he would know. He told me to ask you.

Well, the photos showed something I had definitely not seen before: 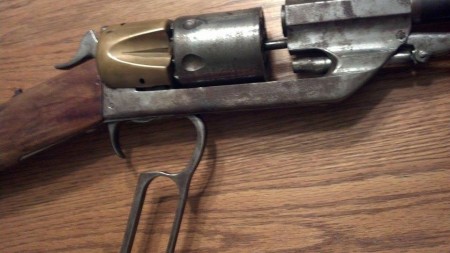 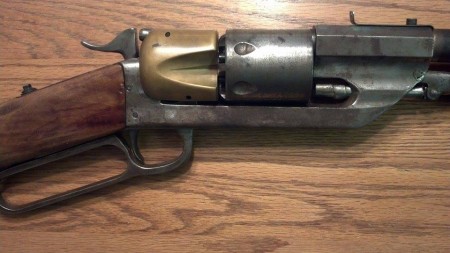 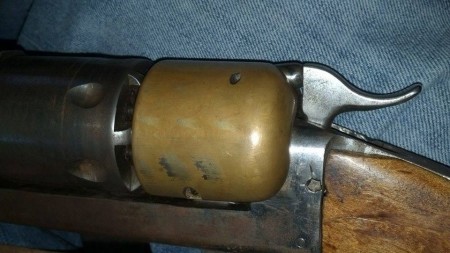 The last one of these emails I posted turned out to be a sporterized Finnish-American Mosin Nagant – this one is almost certainly the product of an amateur gunsmith’s shop. I say that for a bunch of reasons:

That certainly is an unusual piece! I have not seen one of them before, but I think I can make a decent educated guess at what it is: a relatively recent home gunsmith’s project. I come to that conclusion because of the combination of several elements:

The two fundamental flaws endemic to revolver rifles are the risk of a chainfire injuring the shooter’s support hand (on muzzle-loading designs), and the cylinder gap spitting gas and/or lead shavings into the shooter’s forearm. The first issue can be resolved by using self-contained cartridges, and the second can be addressed by using a mechanism that seals the chamber to the barrel. For example, the very rare Pieper revolving carbine (used by Mexican police forces in the 1890s) did this, for example, using the same mechanism as the much more common M1895 Nagant revolver used by Russia and the USSR. It is a bit difficult to tell, but the top photo appears to show recessed chambers on the front of the cylinder, and the cylinder appears to cam forward against the barrel when ready to fire. The use of the ramrod as a front handgrip is also a creative idea, and not one I’ve seen on any historical designs.