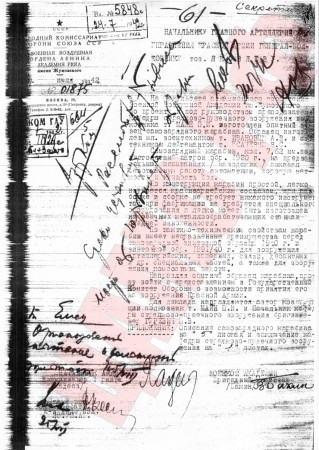 To the left there is a Soviet memo on the subject of the experimental carbine designed by a Colonel P.I. Mayn. The memo reads:

To the chief of the Red Army GAU, General-Lieutenant-Colonel comrade Yakovlev

The faculty of aviational armament in the Zhukovskiy Military Air Academy, under the supervision of a lecturer from the department of gun and machinegun armament Colonel comrade P.I. Mayn, designed an experimental self-loading carbine. The prototype was built by Junior Military Technician comrade A.V. Ivantsov and Senior Technical Lieutenant comrade V.S. Usantsev.

The carbine is simple, easy to operate, does not require a special tool to assemble, disassemble, or manufacture, and can easily be manufactured on ordinary equipment with up to a medium degree of wear.

The carbine has definite advantages in its tactical-technical capabilities compared to the self-loading model 1940 rifle or model 1891/30 rifle for use by artillery, engineering, communications, airborne, other specialized units, and infantry commanders.

I give you the sample of the carbine and ask you to ask the State Committee of Defense about its adoption into service by the Red Army.

The author of the design, Colonel Mayn, and Chair of the department, Brigade Engineer M.V. Gurevich, are sent for a report.

Attachment: description of the self-loading carbine on 5 pages.

Military Commissar of the Academy, Vakin.

Unfortunately, we only have a single additional page on the weapon, although it does include photos of three different examples of the carbine:

The Russian blogger who initially posted the image suggested that it was inspired by the US .30 Carbine, and hence the inclusion of a page comparing US service ammunition cartridges in the memo. The design appears to be straight blowback in nature, and there is no reason a 7.62x25mm carbine would need a mechanism any more complex. The carbine weighed 6 pounds 3 ounces (2.8kg), and had a rated effective range of 300m. It was fed by 20- and 30-round box magazines. It appears to have been semiauto only and not capable of selective fire, but this seems a bit unclear. In any case, it never did progress into a standard service weapon. It would make a neat project for a modern-day homebuilder, though…

The Soviet Union began to take an interest in military suppressors in the early 1930s, and experimented with things like suppressors for the DP light machine gun. Through the 1930s a variety of different designs […]

The Stechkin automatic pistol was adopted by the Soviet military in 1951, alongside the Makarov pistol. Both are chambered bot the 9x18mm Russian cartridge, and both use simple blowback mechanisms. The Stechkin is a heavier […]

InRange TV Operator’s Guide to the RP-46: https://youtu.be/aKj9FuF5-xQ You can order your own by contacting SMG Guns at smgguns@yahoo.com or placing an order online at SMGGunsStore.com. It’s very exciting to have these available, as they […]