Fridtjof Brøndby was a Norwegian arms designer who created a number of self-loading rifle designs in the 1930s, including one which was submitted to the Norwegian Army for testing. He also developed a 7.62mm submachinegun, the Maskinpistol Model 1933. We don’t have much information on Brøndby, but we do have a good set of photos of his 1933 design. 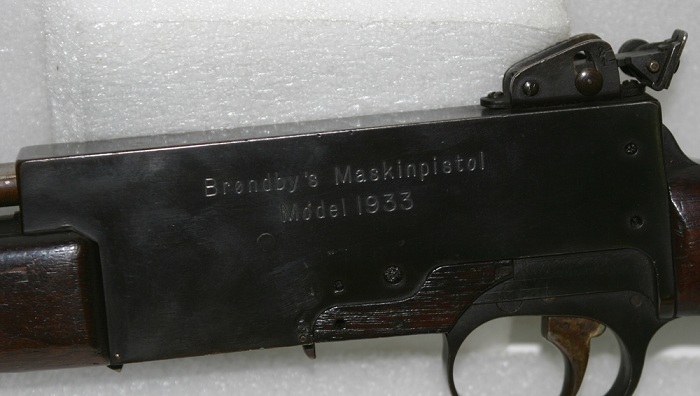 The Model 1933 was a gas-operated, locked breech design, but fired from an open bolt. We can tell that much from the photos, but not a great deal more. You can see the whole set on the Brøndby Model 1933 page in the Vault.

The one other photo we have been able to find is an unfortunately small image unearthed by Tony Williams from a British pre-WWII report, which shows the Maskinpistol 1933 along with three other of Brøndby’s designs:

Do you have more information on Brøndby or his designs? Let us know!

Courtesy of reader Peter, we have this neat cutaway drawing of the Norwegian Brøndby military rifle. This rifle was originally chambered in 6.5×55 Swede and was sent to England for military testing. Neat – thanks, […]

Thanks to reader Erik, we have a little more information on Fridtjof Brondby, which we’ve added to the Brondby page in the Vault. Apparently Brondby also designed a 20mm antitank rifle, although we do not […]

One of the very first things I posted here on Forgotten Weapons was an article on a French rifle called the Hagen (it was designed by a Norwegian). I posted an article on it written […]