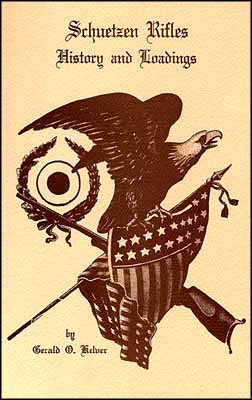 In my ongoing effort to broaden my firearms horizons, I have been reading up on subjects I have little knowledge of. This week, that involved a copy of Gerald Kelver’s Schuetzen Rifles: History and Loadings

. For those who haven’t heard the term before, Schuetzen was (is) basically the late 19th-century equivalent of today’s Free Rifle competition. Guns could be of any configuration as long as they were non-bolt-action single shot designs. Barrel length, caliber, weight, sights, and other characteristics were left up to the shooter (although generally clubs prohibited telescopic sights). While long-range matches of 800, 900, and 1000 yards range were popular in the 1870s, around 1880 the trend was changing to what we today consider “schuetzen”, shooting offhand at 200 yards..

Kelver’s book discusses the sport briefly, along with other precision rifle competitions popular in the latter half of the 1800s, but this 130-page book is primarily about the different types of American-made competition rifles made at the time, and secondarily about the notable gunsmiths and to a lesser extent shooters that accompanied them. These guns were typically offered in a wide range of calibers and configurations and appealed to both target shooters (in mid-range calibers like the .32 and .38 and also hunters and frontiersmen in larger .45 calibers. The rifles spanned the transition from black powder to smokeless, and many of the very successful shooters had grown up accustomed to muzzle loading weapons, which would influence their thinking.

It was commonly accepted at the time (and was, in fact, true

) that when using black powder, loading a bullet from the muzzle would give better accuracy than loading from the breech, so the common practice among “serious” shooters was to seat the bullet from the muzzle and then load a cartridge case with powder charge from the breech. A tedious process, but one which could give results that would still raise eyebrows to this day. Kelver recalls a particular target shot by one C. W. Rowland of Colorado in 1901, who put 10 shots into 0.725 inches at 200 yards (benchrested). He did this with a Pope-Ballard rifle in .32/40 caliber, muzzle-loading his (200 grain) bullets and firing with FG black powder.

At any rate, after a dozen or so pages about the history of the style and matches, Kelver gets into the meat of his content, which are the American-made Schuetzen style rifles. He has chapters on the Stevens, Remington, Ballard, Maynard, Sharps, Whitney, Peabody-Martini, and Winchester offerings, covering their styles, designations, calibers, barrel lengths, and prices. It’s fairly dry reading, but information-dense. Following that, Kelver has brief chapters on some prominent western gunsmiths – Carlos Gove, John P Lower, George Schoyen, AW Peterson, Frank and George Freund, George Schalk, AO Zischang, Adolph Nieder, W Milton Farrow, and, of course, Harry M Pope. These men have some significant numbers of rifles associated with their names, and the information will again be of interest to people looking to collect or research those guns 0 and a bit dry to everyone else. If you’re looking for information on German or Swiss Scheutzen rifles or history, this is not your book – it is specifically on the American guns.

Finally, Kelver concludes with a couple chapters on vintage telescopic sights of the era and information for modern shooters on bullet casting and paper patching. I wouldn’t call these chapters comprehensive by any means, but they will be of some use to the shooter looking to improve their processes for making components or vintage cartridges.

Overall, I’d say that the book is a useful reference is you look at this fine old rifle above and see it as the epitome of sharpshooting beauty. If it strikes you as artistic but impractical or just not particularly interesting, then you should probably pass on Kelver’s work. Though if you’re in a country with very restrictive gun laws, Schuetzen could be a great way to hone your marksmanship with fewer Imperial entanglements…

Schuetzen Rifles: History and Loadings is on Amazon only as a used book at several times the cover price, so if you would like a copy, I would recommend a black powder supplier like the Buffalo Arms Company, who has if for $13.95.

This pistol (and its ammunition) is lot #2401 at Morphy’s April 2019 auction. In 1994, Smith & Wesson began shipping the Model 3566, a double-stack, single action pistols tuned for high-level USPSA competition. It was […]

Holy moley, is that the most dense and snooty post title ever? I think it might be. However, I think it’s a much more interesting subject than most folks might anticipate, and it’s something that […]

The M1 Garand needs no introduction, does it? Here is is at 2000 frames per second: