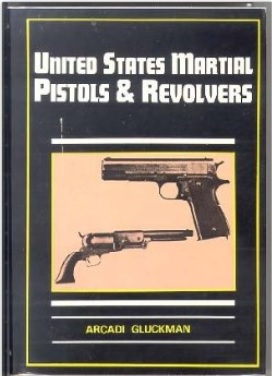 Pre-WWI American handguns are an area that I am pretty weak in, and I’m working to remedy that. One of the initial resources I picked up was Arcadi Gluckman’s United States Martial Pistols and Revolvers

. Originally printed in 1939, it is a pretty good reference for the title subject – especially considering the price.

Arcadi Gluckman was a retired Colonel of the US Army, and an avowed “gun crank” (“gun nut,” we would say today) who saw a need for a good reference on American military handguns and decided to write it himself. The result was a remarkably well rounded book – each chapter includes some initial historical context, the relationship between the government and the various arms manufacturers, and then detailed information on each firearm, including dimensions and markings. The book was reprinted without significant changes through the 1960s – my 1977 copy of Flayderman’s Guide refers to it as “the basic guidebook to the field.”

The biggest shortcoming is the illustrations. The book contains 29 photographic plates (all at the end), each showing four to six different pistols. Each pistol is presented only once, so you never get to see both sides, and the pictures are black and white and fairly small. It is only because of the quality of the gun descriptions that the poor photographs are not a hindrance in trying to identify a particular piece.

The book is divided into two parts – single shot pistols and repeaters. The single shot section is further divided into chapters on flintlocks, percussion pistols, cartridge pistols, and secondary martial pistols. The first three of those are obvious (and the single shot cartridge pistol chapter is quite short, containing just three Remingtons and a single Springfield experimental model), but the fourth is worth explaining. Gluckman defines primary martial pistols as ones which were made by government arsenals or under major contract for standard issue to military forces. That, of course, leaves a great many designs made in much smaller numbers on emergency contracts, in hope of military sale, or for individual states or militias – those are the secondary martial pistols. While not of the large-scale historical importance like the standard-issue designs, those secondaries are just as interesting (often more interesting, in my opinion) to the collector and scholar. Gluckman includes more than 40 of these secondary single shot designs, including ones like the Hall breechloading pistols (both bronze and iron) and Lindsay two-shot percussion pistol. The information presented on the secondary guns is, understandably, much less detailed than that on the primary issue models.

The second section of the book, as I said, covers repeaters – revolvers and semiautomatic handguns. Let me begin by touching on the semiauto chapter. It is short, perfunctory, and really of minimal value. It has one short page each on the Grant-Hammond and Savage (more information on both is readily available on the ‘net today), and nothing on the Remington M53. The sections on the Colt 1902 and 1911 are fine, but today there are a plethora of outstanding resources on these (and the other Colt automatic variants), and Gluckman has nothing to add to them. And that’s fine, really – the reason to have this book is for its coverage of the older guns, not the semiautos.

There are two chapters on revolvers, splitting them between percussion guns and cartridge guns. The major designs (Colt and S&W) have a fair bit of information, while most of the others (several dozen of them) have about a page each. As with the first section of the book, each of those entries include mechanical specifications as well as typical markings.

to be a good introductory reference to its subject. It provides a very useful overview of the pistol development and military use in the United States, which can be then followed up with more detailed research on individual makes and models. Without a high-altitude overview like Gluckman’s, it is difficult to know where to begin on the subject, and how much significance each particular gun should be credited with. The best part is that while it is long out of print today, there are plenty of copies available on Amazon as cheap as $5 plus shipping. At that price, there is absolutely no reason not to add this volume to your library.

In the aftermath of their rejection in the US 1907 pistol trials, Joseph White and Samuel Merrill continued working on handgun designs. In 1911, Merrill wrote to the Ordnance Department to inquire about whether they […]

This Thompson is being sold at Morphys on October 30, 2018. The USMC had acquired a few hundred early 1921 model Thompson submachine guns in 1926, and prompted the US Navy to formally test the […]

The perk for $100 Patrons is choosing a gun they would like me to find and film, and one such Patron (Mark) expressed a curiosity about US testing and lack of adoption of an MG-42 […]