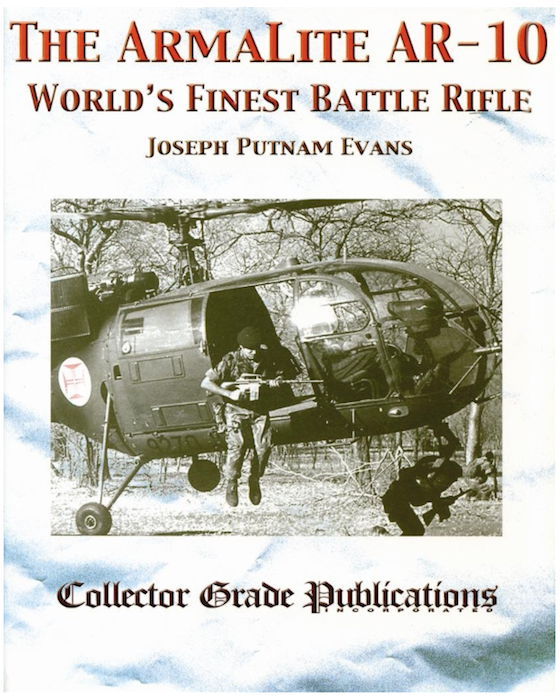 One of the topics that has been (somewhat oddly) lacking a detailed and well-researched history is the Armalite AR-10. There was a book written by a Major Pikula many years ago, but it is really hard to find (I’ve seen it referenced, but never found a copy myself). There is the Collector Grade book on the AR-15 (The Black Rifle), but it has only a scant dozen pages on the AR-10. What we have really needed is for someone to do the research and tell the full story of the Armalite patriarch, the AR-10 – and now Joseph Putnam Evans has.

The Armalite AR-10: the World’s Finest Battle Rifle was just recently released by Collector Grade, a publisher whose name should be well-known to any arms historian or collector. Personally, I will buy and Collector Grade book sight unseen, because of their outstanding work in the past, and Evans’ volume is no disappointment. At 389 pages copiously illustrated in color, this is right in the middle of length for its type of book. I am very happy to note that it includes an index – the publisher’s apparent distaste for that tool being one of my few complaints with books from Collector Grade.

Anyway, I should be discussing the work itself, not the publisher. What Evans has done is compile a thorough and detailed history of Armalite’s work in the United States and abroad. The book begins with brothers-in-law George Sullivan and Charles Dorchester developing their “Para-Sniper”bolt action rifle and its ideas for super lightweight firearms. At the same time, Eugene Stoner was independently developing his own rifles, and the book explains the paths of both sets of projects and their ultimately serendipitous meeting at the Topanga Canyon Shooting Range.

Descriptions and histories of all the early Armalite project guns follows, including the Para-Sniper as AR-1, Stoner’s .30-06 hunting rifle M7 as the AR-3, the AR-5 Air Force survival rifle,the semiauto shotgun that was the AR-9, and others. The one that really took off, of course, was the AR-10, with a combination of a rotating bolt inspired by Melvin Johnson (whose involvement is detailed) and Stoner’s innovative idea of combining elements of a direct impingement system with a gas piston built into the bolt carrier itself. At this point we reach one of the most interesting parts of the story, to me. Between the initial prototypes and the models ultimately adopted by several militaries there was a winding path of development and change. The rifle’s original raison d’etre was a combination of very effective recoil moderation allowing controllable fire from a very light rifle. The original military prototype was a scant 7 pounds loaded – a weight considered impossible by the Ordnance Department, and yet here Armalite had done it. It was a combination of titanium, aluminum, and (against Stoner’s advice) a composite barrel that made this possible, and it was quite the eye-opener to Ordnance officers.

As always happens, of course, the design became heavier and more robust as it would its way through the testing process. I will leave the sordid detail of its US defeat to Evans, as this takes a substantial portion of the book to explain in proper detail. Ultimately, Armalite would set its sights on Holland and the Dutch firm of Artillerie Inrichtingen to produce its rifle for worldwide adoption. Enter small arms legend Sam Cummings as sales agent, and we have a fascinating story of phone calls to Castro, German WWI lances for the Sudanese Camel Corps, and much more. With each different contract came a slightly different set of customer requirements, and this led to a confusing profusion of different models and details. Evans does an excellent job of identifying, describing, and putting in context each of these different types.

The closing chapters of the book look at a number of examples of notable individual combat use of various AR-10s in conflicts around the world, from Angola and Mozambique to Cuba. Finally, the different semiauto receivers made for collectors over the decades here in the US are each briefly discussed, as are the modern iterations of the rifle, from Knight’s Armament and the new Armalite company.

Overall, Evans has presented a detailed but well-written history of the AR-10 covering all of its major developmental pathways. Even the most knowledgeable collectors will find details within that they did not previously know, and for the great majority of us the book will be massively educational. My only real critique would be that Evans is a bit heavy-handed on his praise of the rifle, especially in the early sections. He is clearly a loving fan of the gun, and it is this passion for the subject that I am sure motivated him to do the research necessary to produce this work. If he fails to always hide that passion behind dry language, I can’t really object too strenuously.

List price for The Armalite AR-10: the World’s Finest Battle Rifle is $79.95, and it can be purchased through Collector Grade directly or via Amazon. It is in print for the time being, but like all Collector Grade books (and all good juicy firearms books in general) it will eventually sell out and become both difficult and expensive to find. I would definitely recommend that anyone interested do themselves a favor and pick up a copy now, while it’s easy. This is definitely a book that has earned its place in your library.

When we went to the range to do our video on the Schwarzlose 1908 that you saw yesterday, we didn’t have our slow-motion-capable camera along. I knew it would be great to get some slow […]

Today’s Special Presentation is an overview of all the semiautomatic pistols that were actually put into serial production before the year 1900. We have looked at these individually before, but I think it is worthwhile […]