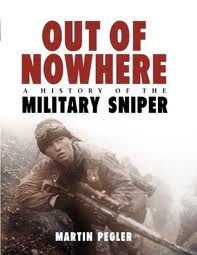 I have been slowly trying to improve my education on sniper rifles, with the goal of putting together a series of videos on some of the interesting historical ones I have access to. On the recommendation of a friend, Martin Pegler’s Out of Nowhere: A History of the military sniper (General Military)

was one of the first reference books I picked up.

Pegler’s book is well written, engaging, and interesting. At 333 pages long, it is able to give pretty decent coverage to a long history of the subject matter. It begins with the advert of rifling itself several centuries ago and proceeds all the up to the present day (it was published in 2006). The bulk of the material is about the First and Second World Wars, of course, with additional chapters on the American Civil War, Vietnam, and the various brushfire conflicts of the Cold War. The coverage of the World Wars is broken up intelligently, with the First split into 1914-1916 and 1916-1918, as the opportunistic and ad-hoc sniping endeavors turned into formal programs with standardized (or at least less varied) equipment. The Second World War is divided into chapters on Russia, Germany on the Eastern front, the Western theater, and the Pacific theater.

What I liked about Out of Nowhere was its ability to put the overall development of military sniping into context, and to explain the ebb and flow of formal sniping programs in military service. What I found more disappointing – because of improper expectations – was the lack is serious detail on specific weapons. Pegler tells his story with anecdote and generality, and rarely with strict developmental details. In the Russian chapter, for example, one will learn about the large scale of Soviet sniper training prior to WWII, its collaboration with German optics manufacturers, its later experience testing weapons and tactics in the Spanish Civil War. The chapter continues with a brief discussion of Finnish sniper experiments, and the Russian hopes for the SVT-40, followed by the adoption of the 91/30 PU. Typical Soviet sniper tactics are discussed, along with the general training program, clothing used, daily life, and the use of female snipers. What one will not find, though, are details like the number of different types of arms fielded, or specific explanations of what led to various changes in arms or equipment.

For many readers, the focus on telling the story of “what was life like as a sniper for [country] in [particular historical period]” is probably a welcome one – and it is certainly valuable material to understand as a foundation for a deeper understanding of specific guns and their strengths, weaknesses, and historical use. It should be understood that it not a rifle collector’s reference book, though, except in pretty broad terms. It makes a fine first book on the topic, to whet the appetite for more details. Nearly every page includes pictures; some vintage scenes and some detailed shots of specific weapons, scopes, or other accessories.

Happily for us (if not Mr. Pegler), it seems to have been printed in overly optimistic quantities, and can be had on Amazon for as little as $3.22 used of $9.99 new. At that price, it should be an obvious addition to the library of any arms or shooting enthusiast.