A heavyweight amongst technicians of German ancestry is Paul von Mauser. His greatness is not only visible in his entrepreneurship and his righteousness but also in his iron will and his character. 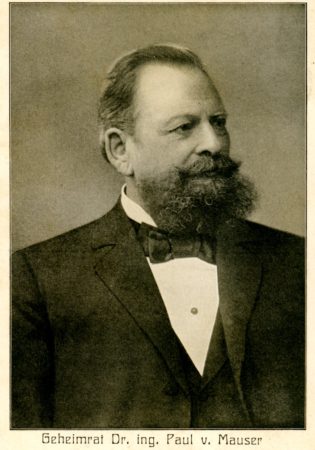 As the youngest of 13 children of a gun smith working at the Royal Rifle Factory in Oberndorf am Neckar he was born there on the 27th of June 1838. The large number of children in the family made that there was never an amount of wealth present in the marital house. Money problems were always present. But the simple, honest father who also produced ammunition at home after work in order to make some extra money, did not shy away from the costs needed to provide his sons with a good education. With this they should be able to accomplish things that he never could. So besides normal education a special education in drawing and geometry was arranged, all 5 sons followed this education. The were to follow in their fathers footsteps with better results and all had the skills to accomplish this, the strongest however were the two youngest sons Wilhelm and Paul.

At the age of 14 Paul joined the factory, where his father had been working for decades, as an apprentice. The work there did not pay very well but since his qualifications were obvious he was soon given more specialist jobs. He also made minor improvements which also helped his reputation. He followed a short military training and was assigned to the Ludwigsburg Arsenal in 1859. It is interesting that his requests for leave at home were denied because they feared that the rifle factory in his home town would keep him there as a very good gun smith. In 1857 he had the opportunity to study a Prussian needle gun, which he immediately identified with his keen expert eyes as the rifle of the future, and even then he had the plan to occupy himself with the production of this rifle together with his brother Wilhelm after his military service ended. So they started in 1860 in the old paternal workshop with two apprentices. They succeeded in designing, and more importantly, building a breech loading cannon. The credits for this surprising and impressive piece of craftsmanship should go equally to both brothers. The King of Württemberg was offered the design of the new weapon for his consideration; he acquired the model of the gun for the model collection of his arsenal and paid the brothers a modest sum for their work.

It was the foundation of restless new work, but it didn’t lead to improvements on the gun but for researching a new rifle construction, that was based on the principles of the Prussian needle gun. They started in 1863 and already 2 years later the first model was ready: a needle gun with a calibre of 14mm. The shooting tests produced excellent results. The brothers presented their design to the Austrians who, after the war of 1866, were looking at improving their small arms, like all other countries. This step produced no immediate result. But the American called Norris, representative of the Remington rifle factory, at which an older Mauser brother was working, saw the new rifle at the Austrian War Ministry. This made him aware of the Mauser brothers and, recognizing possible business for his factory, contacted them. He bought the rights of the first rifle and contracted the brothers to manufacture the rifle at his costs in Liege, the heart of the Belgian gun industry. On the 22nd of September, 1867 Wilhelm and Paul Mauser went to Liege. Here they absorbed a vast amount of weapons related knowledge and here they also encountered the pulse of international business and learned that not only Germany was available as a possible market, but the entire world. The small residential house at the Rue du Vert Bois in which they lived became the birth place of the German army rifle M/71.

Already in 1869 Norris, for whom the brothers worked exclusively, had offered the rifle to the Prussian state, but Prussia refused. On the 14th of April, 1870, just before the outbreak of the French-German war, both brothers, with little money but with rich experiences, returned to their home town, freed from Norris and his money. Early in May the Prussian military rifle school, where they had presented the gun again, tested the rifle for acceptance as army rifle. Daily shooting trials exposed some issues here and there, which were corrected. Then war breaks out and the brothers have not reached anything. But the war showed that Prussia learned that their small arms needed serious improvements. New negotiations with Wilhelm Mauser in Berlin and Spandau took place, while Paul was constantly working at the work bench at home, improving the rifle. Will power and hard work, both mentally and physically finally produced results under great difficulty: in May 1872 the decision is made by which the model M/71 is accepted as service rifle. The simplicity of use, the increased rate of fire and the improved range were the main reason.

The payment the brothers received for their rifle was 12,000 Taler. Besides that the Prussian government had given them an order for the delivery of some rifle parts. So the brothers had new possibilities and they decided to erect a factory in order to fulfil the contract. They started the construction of a new factory building in their hometown. There were multiple interesting areas for developing such a company, but the brothers decided to stay in their home town. Fifty workers started, their numbers rising every day. The gunsmiths had become factory managers, the wishes of their father had been fulfilled. A major event challenged the brothers soon, however: on the 20th of August, 1874 the new factory building was destroyed by a great fire. But the factory was rebuilt within 8 weeks and at the same time the Württemberg government offered them the Oberndorf Rifle Factory for sale, with the contract to deliver Rifles and Carbines Model 71 to the entire Württemberg Army. The contract was tempting but the money for the purchase was unavailable. After a lengthy consideration the brothers accepted the offer.

With a capital of 300,000 Marks in August, 1874 the Komandit-Gesellschaft Gebr. Mauser & Co. was founded. The factory with some 300 machines was purchased. This purchase demanded new orders and they were able to get these from Bavaria and Prussia. Soon Württemberg was supplied with 100,000 rifles, Bavaria with the needed 250,000. It seemed that the former royal rifle factory was a good asset for the company, much better than anticipated. They were able to produce some 100 – 200 rifles a day and this was needed to secure the business. But soon the number of contracts became too small, while the output had increased to a surprising amount.

This introduced the next challenge: to remain competitive. The entire world called for improved fire speed and this meant capacity problems existed. Soon even the brothers themselves worked in the factory, because even the smallest decrease in output could cause financial problems. But the unusual work ethics of the brothers helped to avoid trouble. Wilhelm was continuously on the road, as he was the designated negotiator, Paul worked constantly at home. All states of the continent were visited and for years, Paul had to carry the burden of production by himself. But it took his brother a lot of courage and will power to allow him to run the factory alone, as he knew very well what challenges there were and he often worried whether his brother at home could cope with all this.

Years passed and at the 21st of January, 1881 Wilhelm Mauser found himself in the small town at the Neckar again, welcomed by factory workers and staff with lit torches. An exhausting battle with a large competitor had drained his energy. It had been too much for him. He did see the introduction of the Mauser repeating rifle M71/84 being demonstrated to the old Emperor Wilhelm in the summer of 1881. But that was the conclusion of his life’s work. He passed away in January, 1882.

His brother, who had to run the company that had become famous all over the world, succeeded in having the magazine rifle ready two years later. Another two years later, as a result of a Turkish contract, the small calibre rifle was developed which would later be accepted as the M98. In 1896 the long years of development of a revolver were ended. Followed by the introduction of the Mauser self-loading pistol, which like the other weapons and the tools made at the factory helped to make Mauser famous all over the world.

Shortly before the outbreak of World War One Paul Mauser, whose work had given his country the best rifle possible, passed away. He would not see the expansion and consequent collapse of his company during the war and afterwards. With him, a man had gone who never lost sight of the soul of his people, their culture, through his technology. A man who not only had a good mind but also a good heart. Even when his work lay in ruins after the war, the ruins had kept his soul alive and new life would spring from it. And from the spiritual and physical strength of the brothers who had founded the company, from deepest humiliation a new company rose from the ashes, inspiring the German nation. Today it produces a variety of products for the peacetime market. It shows that only a strong soul, strong courage and a strong faith can accomplish what seems impossible to others.

Waffen-SS soldier manning a Czech ZB-37 machine gun on its tripod. Note that the articulated tripod legs have been put to good use mounting the gun up on a large rock that offers some cover […]

This is the second of our two videos from the most recent 2-Gun match, which was designed with an explicit World War One theme. This one is a head to head match between me, kitted […]

When the Germans occupied Norway, they took advantage of the arms production facilities at the Kongsberg Arsenal to make a number of Krag rifles to their own specifications. They were made with a mixture of […]