Accoutrement is the term used to describe items carried on a soldiers person. In modern military jargon it would be referred to as the Fighting Load. Having spent a lot of years carrying around a fighting load I was curious at what this equipment had transformed into from even 20 years ago when I last wore an ALICE pack and took a look at how it had changed over the last 200 plus years.

Accoutrements have always been used to meet two needs – items to fight and items for sustenance. The fighting items would include ammunition, bayonet, and later things like grenades. The sustenance items include food, water, bedding, and spare clothing. These two equally important needs are what ensures a soldier’s ability to survive and be effective in battle.

In 1777 in Massachusetts the first attempt at standardized US military equipment was made. Until that time the militia was left to their own devices to find ways to carry equipment. The first equipment (not surprisingly) was based off British design and consisted of a scabbard, a bayonet carriage, a cartridge box for ammunition, and a haversack and canteen for food and water. A bedroll was made up by the soldiers to be worn across the back. 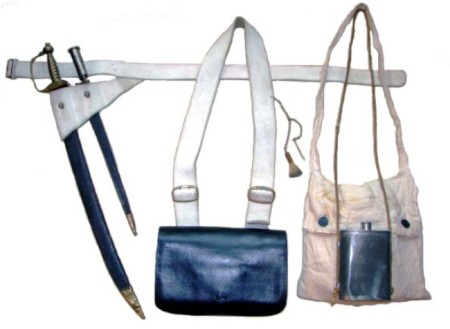 This pattern was continued until 1808, at which time the military switched to the .69 caliber musket and changed the cartridge box slightly to accommodate that. All of these earlier accessories used white leather belts officially but in practice a shortage of buffalo hides around the War of 1812 made use of black leather more widespread. 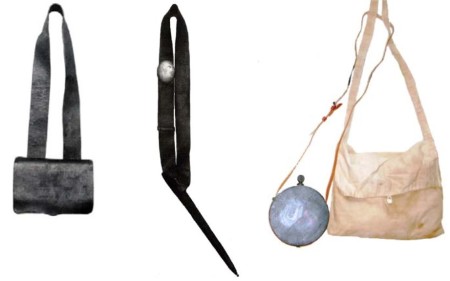 You may also notice the sword scabbard had disappeared from the rank and file, being used only by officers.

The next change to the carrying equipment occurred in 1828, once again predicated by the introduction of a new weapon – in this case the flintlock musket. This new design of the cartridge box was a much more ornate and decorative design and incorporated the US and Eagle Symbols. Six years later in 1834 the saber belt was also modified and re-patterned for the dragoon regiments. In this formation the first look of the modern design is clearly evident using the belt to carry the equipment and shoulder straps to distribute the weight of equipment over the soldier’s body.

This pattern was relatively short lived as the introduction of the hall carbine rendered yet another change to the cartridge box. It also introduced the standardized bedroll pack. 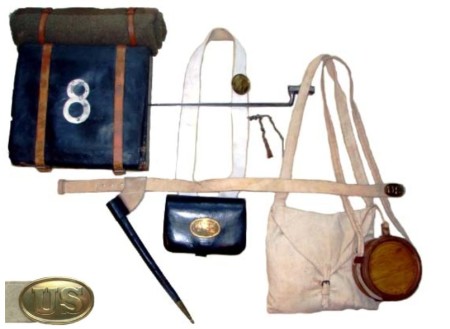 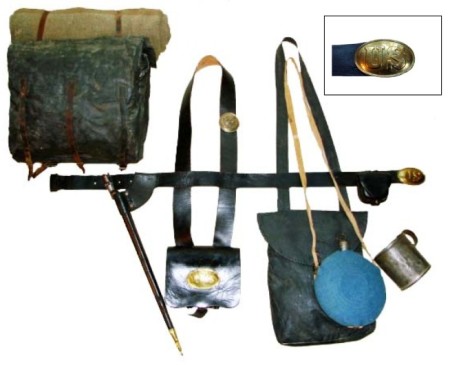 By 1878 the equipment had undergone another transformation. There are many other smaller changes throughout these years – most notably the differences in the infantry equipment and cavalry equipment as one might expect. 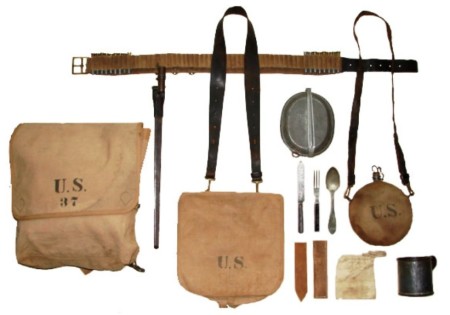 In 1909 the Infantry Equipment board was assembled and conducted studies and tests on what a soldier needed to carry and how the weight was distributed. It made the major change of turning the haversack into a backpack and adding individual ammo pouches to the belt and webbing to replace shoulder straps. This version lasted throughout WWI and beyond. At the end of WWI there was so much surplus equipment that soldiers were issued two full sets (one for parade and one for field) and virtually no changes were introduced until the beginning of WWII. 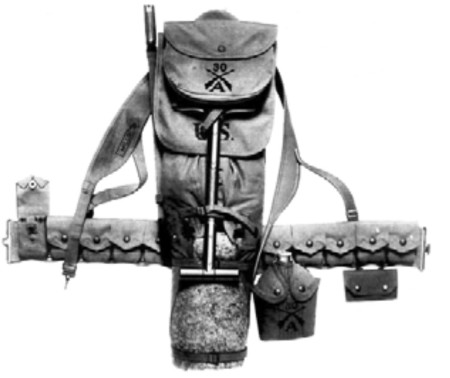 WWII brought the small changes and most notably the introduction of the M1VA1 Carrier which was used for carrying of the protective gas mask. Seen here along with a pistol belt and pack as issued to a specialist solider armed with an M1 Carbine. The majority of US forces continued to use the same pack system as had been issued in WWI, with only minor upgrades. 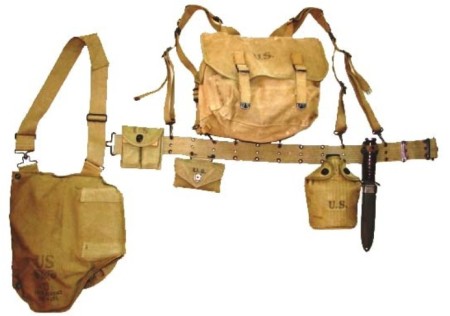 In the 1950’s the Korean War brought introduction of the M1945 Combat and Cargo Packs. While officially introduced in the latter stages of WWII it was not fully distributed until the Korean War. This system finally replaced the clumsy WWI folding haversack design with a true backpack system, and is the direct ancestor of what is used today. 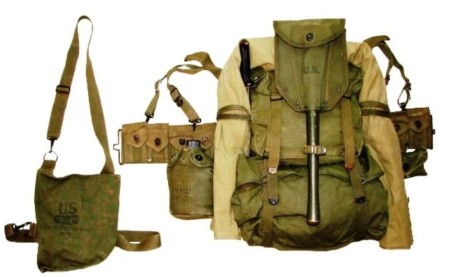 With the Vietnam War another change was made. This time the changes came about because the climate caused the older style to deteriorate and fabric was changed from canvas to nylon and plastic. This is the M1967 Modernized Load Carrying Equipment.

In 1974 the ALICE (All-purpose Lightweight Individual Carrying Equipment) pack was introduced. This was the framed pack to go with the suspender-based load bearing belt still in limited use today by National Guard and reserve troops (but more commonly found in Army-Navy surplus stores and filled with under armour baselayers and surplus military paraphernalia). 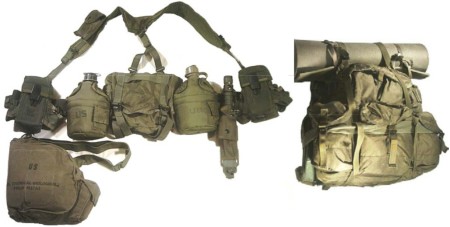 The ALICE system has been replaced in recent years by MOLLE (Modular Lightweight Load-Carrying Equipment). Original distribution began in the late 1990s to special operations forces, with widespread distribution beginning in 2003. This more flexible modular system allows for a great number of variations based on individual soldier and mission-specific needs, while still using a standard base. 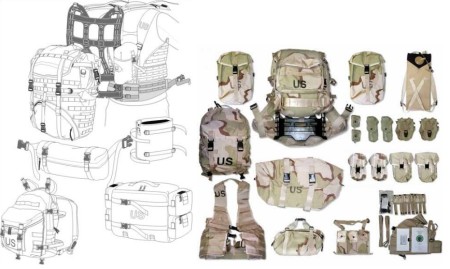 In addition to military use, MOLLE equipment has caught on quickly in civilian culture with outdoor enthusiasts, survivalists, and hikers. When used in the civilian culture, MOLLE packs are more apt to be filled with survival gear from places like www.rvops.co.uk rather than standard military issue kit.

There is much discussion and debate on the evolution of the accoutrements used by soldiers to carry fighting equipment and food and water. Though obvious that modern equipment and materials have some technological advances they still serve the basic function to “keep beans and bullets” in the hands of the soldier. The progress has come at the cost of weight and mobility as clear if you look at the relatively simple equipment of 200 years ago. Interestingly, the MOLLE system was designed to allow the soldiers the ability to shed some of that excess weight and get back to ammo, water, food, and a bayonet when in actual combat – the same as 236 years ago.

Want to see more detailed coverage of US Army accoutrements, uniforms, and small arms? Check out this PDF Survey of US Army Uniforms, Weapons, and Accoutrements by David Cole.

A Lewis Gun, in .303 British, at 2000 frames per second: The Lewis Gun was developed by American Isaac Newton Lewis shortly before WWI, but the US military was not interested in it (in part […]

By the 1890s, Winchester had established an extremely successful business in lever-action rifles. John Browning’s designs for the 1886, 1892, and 1894 models had proven very popular, and so Winchester (seeing the potential of the […]