One of the more common type of vintage military photos you’ll see around is the formal unit portrait. The kind where that whole platoon or company stands at attention in a neat and orderly manner, with their heaviest weapon in the center front and the officer at one side. There are lots of them floating around, like this one (click to see it full-size): 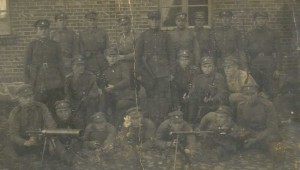 Very formal and professional (and note the Lewis and Madsen machine guns). But if you’ve ever been to a big family gathering or the like, you know that kind of photo is a real hassle to take. Everyone wants to be done with it and get on to something productive. I don’t know about your gatherings, but with my family the hook for the more restless kids in the photo was that is they sat still for the”good” photo, it would be followed by a goofy one where they could make faces or whatever. Kind of like those same guys, but in this picture (again, click for the full size): 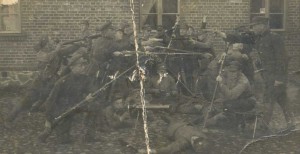 How many unit photos have you seen where the men are bayoneting each other and the two officers are having a Mexican standoff? Ha! I know the photo quality isn’t great, but I really got a kick out of the comparison. People don’t really fundamentally change, do they?

I found these two photos on the net, and I don’t know who the men are – if anyone can identify the unit or nationality, I would enjoy knowing it. We’ll have some more technical content for you on Friday – I’ll be adding a bunch of info on the Swiss PE57 rifle.

Thanks to a reader, we have cleaned-up copies of these photos that show a bit more detail: 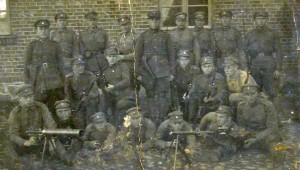 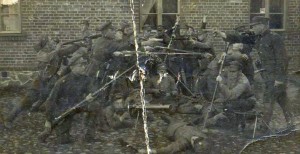 (It was, in fact, a sporterized Dutch Beaumont)

Definitely not to be mistaken for Rat Patrol, which is copyrighted. Couldn’t help myself – I was at the range yesterday with a Jeep, a 1919, and a video camera… 🙂