The Russian ShKAS (Shpitalny-Komaritsky Aircraft High-Speed Machine Gun) is a machine gun design form the 1930s that doesn’t receive nearly enough attention. It was the result of a need by the Soviet air force for a very high rate of fire machine gun for arming aircraft. A high rate of fire tends to be a disadvantage in infantry machine guns, as it is not generally more effective than the typical 600 rpm and requires more cooling and ammunition. In an aircraft, however, opportunities to fire and hit another flyer are fleeting, and it is imperative to have as many rounds down the barrel as possible during those moments.

In the US during WWII, aircraft armament was typically Browning guns with the operating parts lightened to increase the tare of fire (the ANM-2, for example). The Russians, however, instituted a program to design a dedicated aircraft gun from the ground up during the early 1930s and the result was the ShKAS (often claimed to be the first purpose-built aircraft gun, rather than an adaptation of an existing infantry gun).

The obvious notable feature of the ShKAS is it’s eye-opening 1800 round/minute rate of fire with a single barrel. The was possible primarily because the action was designed to minimize movement of the cartridge cases and allow a very efficient (and thus very fast) firing cycle.The gun fed from a disintegrating link metal belt, using 7.62x54R ammunition.

Visually, one of the first things you will notice on the gun is its rotary feed system. This is sometimes mistaken for a revolving chamber, but it is actually a mechanism just to strip rounds out of the ammunition belt.The belt is loaded into the bottom of the cylinder, which turns one increment per shot fired. The cylinder has cutouts to hold 10 cartridges, and a helical cam which extracts the rounds just a slight bit with each movement. So the action of pulling a cartridge out of the belt is spread over 10 firing cycles of the gun, making for a very smooth action without the strong jerk required by a typical mechanism. As we say with shooting, slow is smooth and smooth is fast.

Once the cartridge is fully retracted from the belt, it is fed down a ramp through the center of the rotary parts and into the chamber. The gun is gas operated, with a piston located above the barrel. The bolt is a tilting design, which requires a minimum of movement to lock and unlock. The bolt is pushed up against a locking shoulder in the top of the receiver to lock, and the gas piston pulls it downward upon firing, somewhat like a Bren gun. For initial loading, ten rounds must be manually fed into the delinking cylinder, which is done with a handle located on top of the gun. Then the handle at the rear of the gun is used as a manual charging handle (it has a release button which must be depressed to allow this, so it can be used to maneuver the gun during firing).

The ejector is a lever that comes in from the right side and pushed the empty case laterally off the bolt face, whereupon the forward return movement of the gas piston pushes it out forward through a tube to the left of the barrel.

The first production ShKAS guns were made in 1933, and its first combat use was in the Spanish civil war. Continuous development was made during the 1930s, and the gun’s reliability and durability were steadily improved. Because of its extraordinary rate of fire, the ShKAS was subject ot a number of problems that simply weren’t encountered by infantry gun designs. For one, the lifespan of a mainspring in the early versions of the gun was a mere 2500-2800 rounds no matter what type of steel or wire size was used. Ultimately a solution was found with braided wire springs, which were much more durable (the Germans would later use this type in the MG42, and the Russians in the AK hammer spring). 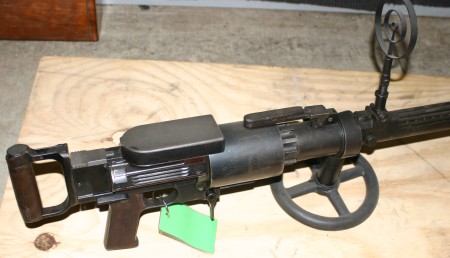 Another issue that cropped up was ammunition reliability. Misfires are a nuisance in ground guns, but deadly in aircraft guns, where they cannot be cleared and leave a pilot unarmed. This was thoroughly learned in World War One, and ammunition for aircraft guns was often made to a higher standard and kept separate from normal stocks (WWI pilots would often check the OAL of every single cartridge while hand loading them into belts to ensure uniformity). Well, in addition to the need for perfect reliability, the ShKAS fired so fast that it put tremendous strain on cartridges. As a result, special ammunition was made for the gun, with thicker primers cups and case heads, and bullets firmly crimped into the cases. In an effort to increase lethality, AP, API, APIT, explosive, and incendiary bullets were also developed for use in ShKAS ammunition.

As a side note, cartridges from the ShKAS production lines (including some of the exotic explosive and API) which did note meet the stringent QC standards but were still functional were often sent to snipers and infantry units. They were particularly accurate due to more precise powder charges, but did not shoot to the same point of aim as standard ball. Some claim that there rounds are higher pressure than standard ammo and unsafe for use in rifles, but this is not true.

By 1941, more than 34,000 ShKAS machine guns had been produced, and acquitted themselves very well in the field. They were made in several variants, including wing-mounted, flexible, and synchronized for different applications. Several other versions were experimented with or made in small quantity like the reciprocating-barrel UltraShKAS (rate of fire: 3000rpm) and a mechanical linking of two ShKAS guns to achieve a combined rate of 6400rpm. These were not widely used, though, as the 7.62m cartridge was unable to keep up with improvements in aircraft armor. Instead, the basic design was scaled up to produce the 20mm ShVAK cannon, which was very successful (and a subject for another article of its own).

When people see the AK-47 and the StG-44 side by side an know nothing about their internal mechanisms, the nearly universal assumption is that one is a copy of the other. The overall layout of […]

Vintage Saturday: What Would Roosevelt Shoot?

Not the cool Roosevelt – we know he liked his .405-caliber Big Medicine. I’m talking about the other one: Leszek found this on eBay (you can buy it if you want; I have no connection […]

I normally have a book review on Thursday, but this week I’m pushing it to Friday. I meant to post this yesterday, but lost track of the date – which, 69 years ago, was the […]