So, you might wonder how firearms were procured in Mexico before the ATF was around to hand them out. Would you believe indigenous development?

Mexico had a couple notable firearms designers working hard in the decades prior to World War II, most significantly Manuel Mondragon and Rafael Mendoza. It’s one of Mendoza’s works that we’re looking at today, the B-1933 light machine gun. Developed during his spare time as an employee of the National Arms Factory, the Mendoza is a technically very good LMG. It was reliable and effective, and served the Mexican armed forces well. In many ways, it’s the gun that the BAR should have been. 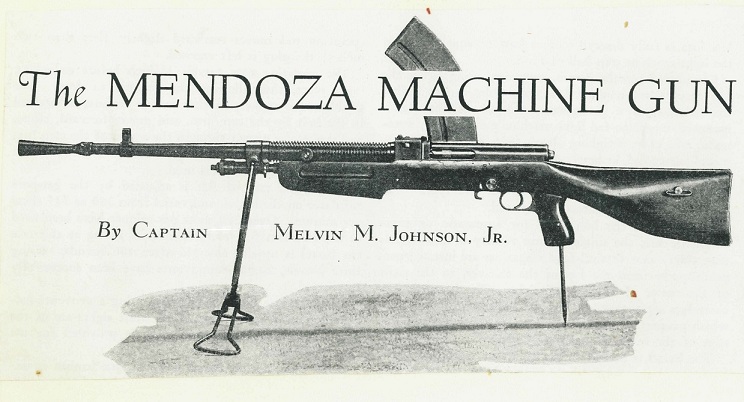 You can read a fairly detailed history of the piece on the Mendoza LMG page of the Vault, where we also have some photographs and a copy of a 1948 original Mexican manual on the gun (which also covers several models of hand grenade).  Check it out – and start looking more closely when you see Madsen magazines for sale. 🙂

This may come as a surprise to some folks, but the first semiautomatic rifle adopted for military use was the M1908 Mondragon rifle designed in Mexico by Manuel Mondragon.  He was granted a US patent […]

Mexico’s President for nearly 30 years, Porfirio Diaz was very interested in modernizing the Mexican Army. He invested in new artillery, magazine guns, and small arms – such as the Mondragon semiautomatic rifle. In addition, […]

Most people who recognize the name Mondragon know it from Manuel Mondragon’s model 1908 semiauto rifle, the first such rifle to be adopted on a large scale by a military (the Mexican Army, in this […]