Today’s post was written by reader Christopher Eger. Please check out his blog, Last Stand on Zombie Island. Thanks, Christopher!

Wool jackets, bowler hats, waxed mustaches and the pall of London’s thick coal-dust fog. All you, the discerning gentleman are missing, is a pistol to practice the manly art of self-protection.  You can choose any of the superb Webley products like the Bulldog or Ulster Constabulary style weapons; however, you are looking for something bigger, better. You ask yourself as you read the Times, what would define you as a man in modern steam-powered 1902 London?

Then you see it, the MARS pistol. A huge auto loading pistol with a 9.5 inch barrel (remember the Colt 1911 only has a 5-inch –what a mouse gun!). Weight is a robust 48 ounces (the puny Smith and Wesson 1899 .38 weighs but 34 ounces). However, the weapon by Mr. Colt holds an amazing 7-rounds you say? The Mars brings 8-10 rounds to the scuffle in an array of caliber choices to fit your needs. These calibers include the .450 Mars, .360 Mars, and .335 Mars. These unique cartridges pack a force of up to 969-foot pounds of energy after achieving a muzzle velocity of some 1640-feet per second.

All buff aside, the Mars was an interesting and forgotten weapon. Invented in 1899 by one Mr. HW Gabbett-Fairfax the huge weapon was submitted to the British Army’s Small Arms Committee in 1901 for review. In penetration tests against the Colt revolver (which pierced six wooden planks), the .30 Broomhandle Mauser (which pierced eleven planks) the Mars came out on top by penetrating sixteen planks with its bottle nosed cartridges. However the extreme cycling of the weapon (the bolt would pass halfway over the firer’s forearm), and the overly complicated design doomed it to be rejected.

Observers during the tests on board the HMS Excellent in Portsmouth noted that the weapon looked more like a firearm exploding than being fired. The excessive muzzle flash and dramatic cycling swore off even the volunteers from firing the weapon repeatedly.

Only about 80-examples were produced and very few survive.

We are fortunate to have a copy of an original manual and newspaper reviews of the Mars to share with you (also available on the Original Manuals page): 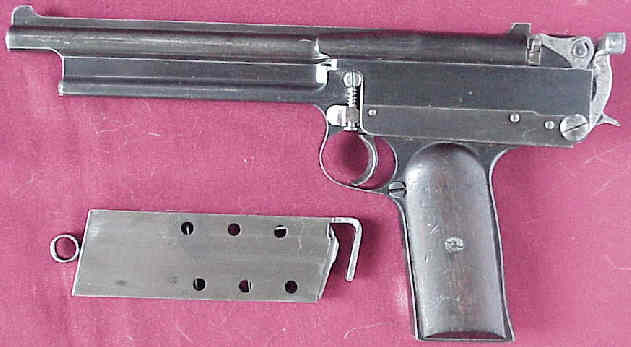 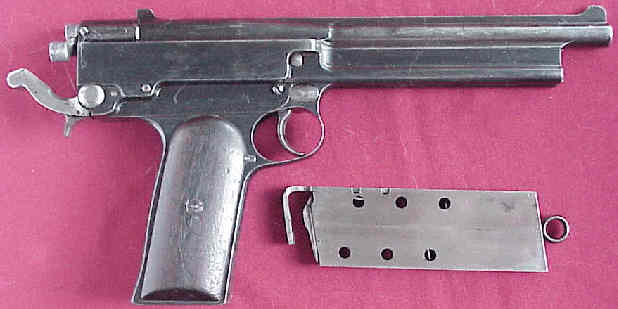