Today’s post is a guest article by Kymm Wilson, on the subject of the very rare LeMat carbine, which he was put quite a bit of work into recreating.

Just prior to the Civil War an inventor named Jean Francois Alexander LeMat invented a revolver known then as the grapeshot revolver. It sported a nine shot .42 cal cylinder with a .62 caliber shotgun barrel as the central axis which the cylinder revolved around. The gun was promptly put into small production until the war broke out when LeMat found buyers and production facilities in Europe.

The pistol was produced in excess of 4,000 units for the Confederacy and was a prized piece to own (as it still is). Just after the out break of hostilities the inventor must have seen the benefits of extending the barrels and mounting a stock must have become obvious, as in early 1861 a patent drawing from England appears of the first carbine for the Confederacy.

The existing carbine serial numbers go up to 200 and this might increase as I personally have found three examples in a back room of Royal Thai armory. The carbines function identically identical to the pistols, except that the rear sight is a leaf set up on the chamber end of the barrel. This increases accuracy dramatically compared to the pistol, where the rear sight was a notch in the top of the cocked hammer. In addition, the carbines show a fair bit of variation in the bore sizes. For example, S/N 7 used a .44 caliber pinfire cylinder and a .56 caliber rifled center barrel, while S/N 152 had a longer main barrel and a 20ga smooth center barrel. S/N 206 had a .58 caliber center barrel, and this one (S/N not mentioned) is another smoothbore 20ga. The bore sizes of S/N 60 are not mentioned, but there are some nice photos of it here.

The gun is a visually arresting looking piece and must have been a great complement to any cavalryman lucky enough to have one.

There is big debate as to its use in the Civil War, which seems silly to me. The gun was produced to a number of 200 hundred and all existing (18) are stamped with British proof stamp for Confederacy. While existing orders for the actual guns have not been found, there is a receipt from the Confederate Richmond Arsenal for the ammunition used by the LeMat carbine, suggesting that they may have been used. And truly, if put yourself in the builders’ and Confederates’ situation the gun was built (no question) and the Confederates would certainly have taken whatever was available. The documentation suggests that the Confederate government rejected the carbines on the basis of price, but a small number may well have been acquired by individuals or small units.

Original carbines start $50,000 and go up (out of my league), so a cottage industry has arisen to take the available replica pistols (still quite expensive) and chop them up to make replica carbines. I have done this myself: 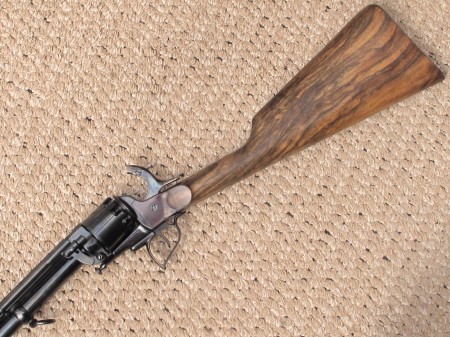 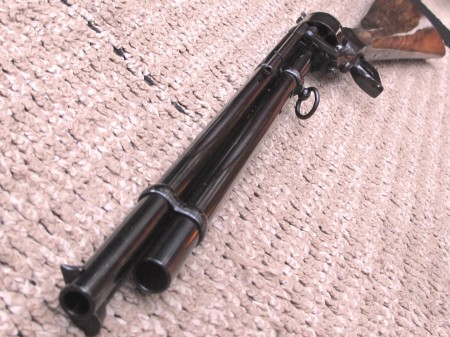 LeMat was actually far ahead of his time and produced the pistol and the carbine in pinfire cartridges bth before and during the war – these are very Victorian steampunk looking. He also saw the problem of lead splash to the support hand and multiple chamber discharge as a potential safety problem, and made a flat front trigger guard as a rest for the support hand. If used, this effectively eliminates the danger posed to the support hand by a potential chainfire.

Ultimately the gun is not as well known as its cousin the pistol, which observant viewers will notice in movies such as Cold Mountain and Twelve Monkeys.

I’ve always been primarily interested in military small arms, and more specifically early/mid 20th century ones at that. I need to broaden my horizons, though, and I’ve been reading more and more about older guns. […]

The Whitney-Scharf was the final rifle manufactured by the Whitney company before it was bought out and closed down by Winchester in 1888. Only about 2,000 of these rifles were made before that time.

Since SHOT Show this year, I have gotten three different 9mm carbines that are all interesting in their own ways. The Kalashnikov USA KP-9 is a virtual copy of the Russian Vityaz submachine gun, much […]