Michael Heidler has again come up with a one-of-a-kind German firearm, and sent us this writeup. This time, it is an experimental variation on the MP38 submachine gun. Thanks, Michael!

by Michael Heidler
One would imagine that everything about German submachine guns of World War Two has already been written. But in-depth research still goes on and sometimes little treasures surface:

The submachine gun with serial number V3013 is kept in the outstanding collection of the Czechoslovak Military Museum in Prague (Vojenský historický ústav Praha). Until today no other example of this model was found. The relevant literature mentions this weapon, but no detailed pictures have ever been shown.

At the beginning of 1938 the Erfurter Maschinenfabrik (ERMA) received an official order for the development a new submachine gun from the Heereswaffenamt (office for army weapons). Already a few months later, at the beginning of June 1938, ERMA presented the “Maschinenpistole MP38”. This achievement is impressive, however the time interval seems to be much too short for developing such a new weapon. This fact must arouse suspicions that a (nearly) ready draft must have slumbered in the drawers of ERMA. And now the time had come to take it out. And actually, the MP38 wasn’t a complete new design by any means, but rather the advancement of a nearly unknown predecessor model: the EMP36.

The weightiest change, in the true sense of the word, concerned the manufacturing of the receiver. For reasons of weight reduction the solid steel receiver was provided with numerous oblong grooves and and the vertical magazine well got a large round cutout on each side. The lining of the receiver’s lower part of the EMP36 was completely made of wood, but with the MP38 the much lighter bakelite was used instead. At this time still a quite new material in the manufacturing of weapons. In addition the fire selector has been omitted.

The revision was done in a short time. Only seven months later the MP38 was basically tested, followed by the official introduction on 29 June, 1938. Serial production started in July 1938, although very slowly. When Germany launched the attack on Poland (“Fall Weiss”), about 8700 MPs were listed in the inventory reports of the units. The distribution of the new weapon took place in a hurry with the result that there was no time for special field tests. So selected units had to send experience reports back continuously.

But the MP38 still was an expensive weapon to manufacture. In spring 1940 the company ERMA tried to simplify their design. In the meantime the use of pressed sheet metal parts in the industry had made great progress and so the receiver and grip-piece were redesigned for this kind of technology. The new weapon was named “MP40” and serial production started in March 1940. The MP38 stayed in service till the end of the war, but most of them were modified with an improved safety from the MP40.

In this time experiments were carried out with a light-weight MP made of aluminum. No documents or other information could be found, so all that is left is the unique MP38(L) as a piece of evidence. The initiator of this development is still unknown. Some researchers think that the “L” stands for “Luftwaffe” (air force) and that the weapon was a development for the paratroopers, that were in need of light-weight infantry weapons. But the air force did not have enough influence on the arms industry at this stage of war and one should keep in mind that aluminum was a rare and expensive raw-material. Most of it was used in the aircraft industry and step by step the parts made of aluminum on military equipment were reduced to a minimum to avoid shortages. For logical reasons the “L” means “leicht” (light). With a weight of 3.34 kg (7.35 lb) the MP38(L) weights one kilogram less than the MP40.

The military manufacturer code of ERMA is not put on the weapon. The only marking that connects the weapon with ERMA is the Waffenamt WaA280 found on some parts. Some other markings “EE in a circle” can stand for “ERMA Erfurt”. The cast upper and lower receiver are marked with a nearly not visible “AWW” logo. So this parts were made by the Aluminium-Werke Wutöschingen in southern Germany close to the Swiss border. 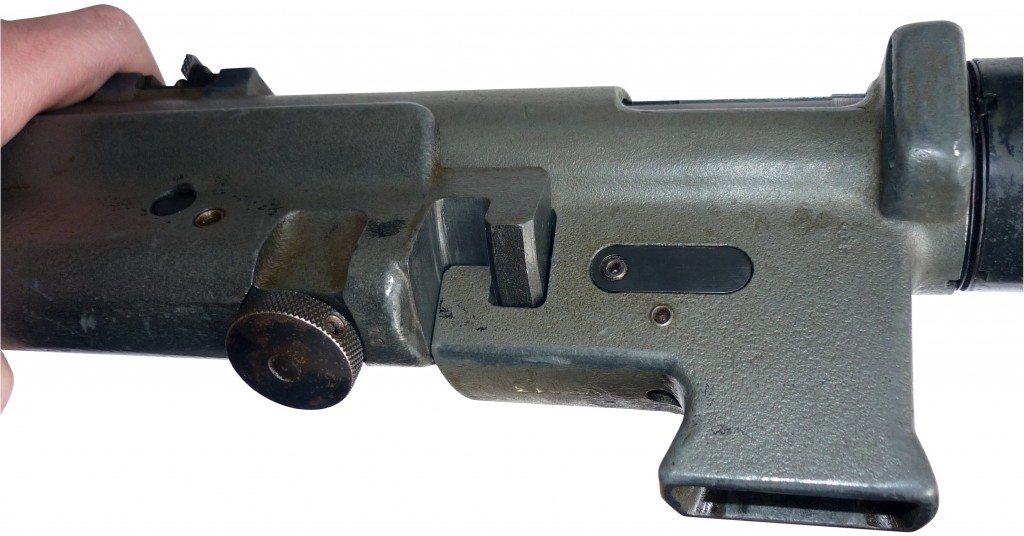 The author wants to thank Jan Skramoušský and the Military Museum Prague.

The H&K Mk 23 pistol was developed in the 1990s for the US Special Operations Command and US Navy. The goal was to produce an “offensive handgun” that could serve as a primary armament for […]

German sentry in the trenches during September 1916 with a periscope and a Gewehr 98 equipped with an extended 20-round trench magazine.

The German has a rather uncommon Erma MP-35, and judging from the can the unfortunate fellow in the grass was carrying magazines for a DP-28.