The military breakthrough for Bergmann finally came in 1903 with a new locking system for the pistol, designed by Louis Schmeisser (who had also designed the previous Bergmann handguns). In 1901, Schmeisser developed the new lock, and it was patented by Bergmann (his employer) primarily for use on heavy machine guns. It was used in these (and Bergmann HMGs saw some use in WWI), but it was also scaled down for use in the 1903 pistol. The new system used a square block that encircled the bolt and could travel a few millimeters up and down. When the bolt was locked, this block would rise up so that its bottom surface was captive in the bolt and its top surface was locked against a block in the bolt carrier. This held the bolt and carrier locked together, so that upon firing they would recoil together. After a short travel, angled camming surfaces in the frame of the pistol would force the locking block downward, freeing it from both the bolt and bolt carrier. Once the gun was thus unlocked, the bolt could continue traveling rearward on its inertia to eject the empty case and load a new one. This system externally looks very similar to the C96 Broomhandle Mauser, but is mechanically reasonably different.

Mechanically, the system is identical to the 1910/21 version, so you can see here for disassembly:

This new locking system was more cost effective to manufacture and more reliable than the side-tilting bolt of the 1897 Bergmann, and it was also quite strong. Bergmann exploited this strength by introducing a new cartridge for the 1903 model – the 9mm Bergmann (clever name, eh?). Thanks to the Spanish, we know this round today as the 9mm Largo. It was a 9x23mm case, firing a 135 grain FMJ bullet at 1060-1115 fps (325-340 m/s) depending on the loading. This was the most powerful production pistol cartridge designed in continental Europe at the time, and had performance very similar to Browning’s .38 ACP.

With this improved system, Bergmann finally had a product that would be appealing to military buys – but he still had to undergo testing and trials and actually make a sale. The British tested a .455 caliber Bergmann-Mars in 1903, but rejected it for not having a heavy enough projectile (they were pretty picky).

Two Bergmann-Mars variant were sent to the US for testing. The first, in 1906, was chambered for a proprietary 11.35mm cartridge (probably the same one sent to the British, but I can’t confirm that). The ammunition sent with it was impounded by US customs upon arrival, and the gun could not be tested (bureaucracy never changes). A second model chambered for standard .45ACP was sent shortly thereafter (for the US 1907 pistol trials) with German-made ammo. Once again, the ammo was impounded on arrival. In this case, testing was able to continue Frankford Arsenal ammunition. Unfortunately, in the first firing test the hammer was unable to strike hard enough to detonate the Frankford primers, and the pistol was dropped from testing (the board report also records that they did not like the forward-magazine configuration). In retrospective fairness to Bergmann, and ammo used for the 1907 trials was pretty crummy stuff and caused problems for all of the competing pistols.

Bergmann’s first major break came in 1905 when a Spanish testing board officially recommended the 1903 for military purchase and use. On September 5th of that year Spain placed and order for 3,000 Model 1903 pistols, chambered for the 9x23mm cartridge. This brought along a new problem for Bergmann – how to actually make them. Since 1896, Bergmann pistol production had been subcontracted out to V.C Schilling in Suhl, and Bergmann’s own industrial works were not tooled up for pistol production. In 1904 Schilling was taken over by the Krieghoff company, which decided to end the factory’s relationship with Bergmann.

The cost of setting up a pistol production line is quite significant, and Bergmann knew that his previous pistols had never managed to bring really significant sales numbers. Being the intelligent businessman, he was hesitant to make the investment in tooling and jigs for the 1903 without having more than the relatively small Spanish order. His solution was to use the facilities he had already set up for making the various prototype 1903 pistols. This allowed some production, but not at a very fast pace. In addition to the Spanish order, this production had to include commercial sale guns and samples for other testing (like the US trials). Bergmann’s own plant produced less than a thousand model 1903 pistols in total, and only a small number of these were sent to Spain by 1908.

Presumably Bergmann spent the years between 1905 and 1908 looking for a new subcontractor to manufacture his pistols – someone with adequate firearms experience. By 1908 he had found such a firm – the longtime armsmaker: Societe Anonyme Anciens Establissments Pieper located in Herstal Belgium. AEP was willing to finish making the pistols for the Spanish order, and was also granted a license to manufacture and market the 1903 pistol commercially. They did this under the trade name “Bayard” – which is why these later Bergmanns are often called Bergmann-Bayard pistols. These Belgian-made examples have serial numbers starting at 1000.

By the time AEP was contracted to build these pistols, the Spanish military had spent several years with their first examples and had come up with some improvements they wanted to make to the design. These were mostly minor changes – larger mag catch, shortened safety lever throw, tweaks to the grip shape, etc. The two major changes were the addition of a disconnector (to prevent unintentional full-auto fire) and making the barrel and bolt carrier from a single piece of material instead of threading the barrel into the carrier as the original 1903 did. With these changes, the design was known as the Model 1908, and AEP completed the 3,000-gun Spanish order of these by the end of 1909. The 1908 model also incorporated a pin that would recock the hammer upon cycling, rather than having the bolt itself slam back into the hammer on each shot.

The recommendation of the 1903 Bergmann had roused the interest of Spanish army officer Venancio Lopez in automatic pistol design, and he began experimenting with his own design that year. By 1912 his pistol design had been perfected and successfully endured military trials. It was known as the Campo Giro, and was adopted as the official Spanish military pistol that year, ending Spanish interest in the Bergmann (although the existing Bergmanns would continue to see service with police units until 1939). Spanish 1903 and 1908 Bergmann pistols can be identified by the early Spanish military acceptance mark, a circle divided into equal thirds located atop the chamber and on the left side of the frame.

German-language manual for the M1908 Bergmann-Bayard: 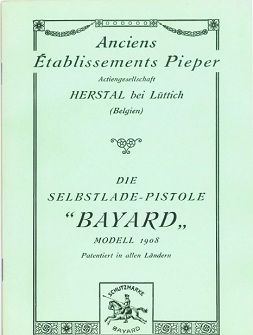 PistolCollection.com has a nice set of photos of a German-made 1903 Bergmann Mars (s/n 508).

We also have photos of a very early Bergmann-Mars, s/n 108. This was from the Schroeder collection, and included an original holster-stock (which was available commercially, but not purchased by the Spanish). This one was sold by James Julia Inc:

We also have photos of a later German 1903 from the September 2013 Rock Island Auction (the same pistol we have a video of, s/n 245 with a mismatched magazine):