In 1915, the French Darne company – best known for sporting shotguns – entered the military market with a contract to manufacture Lewis guns for the French Army. Apparently some of the folks at Darne thought they could do better than the Lewis, and the company developed its own machine gun design during the war. 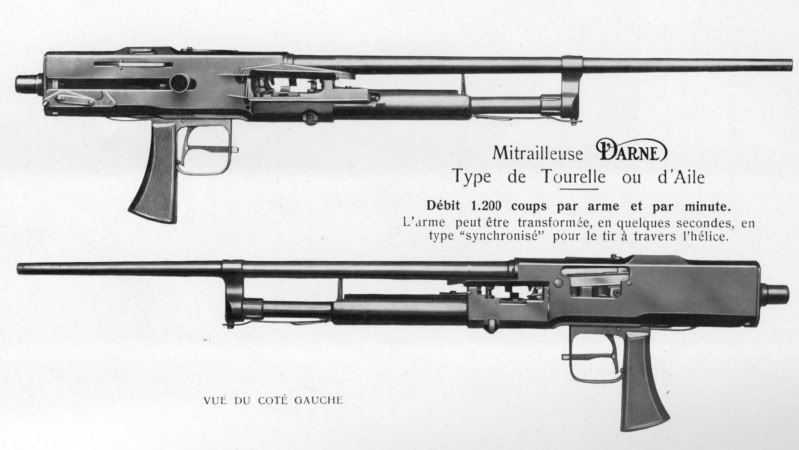 The Darne M1918 was tested by the French military, but was not put into production before the end of the Great War. However, it was purchased after the war, primarily as an aircraft gun. Several variants were made, including infantry guns, fixed-mount aerial guns, synchronized aerial guns, and flexible-mount aerial guns. It was eventually replaced by the MAC 1934 for Air Force use, although the French Navy continued to use them into WWII. Small numbers were also exported to Brazil, Spain, Serbia, Italy and Lithuania, and captured French Darnes were used by German occupation forces for coastal defense.

Mechanically, the Darne is a gas-operated, belt-fed, tilting bolt design. It is rather unusual in that the belt feed is located below the barrel but above the gas piston, although this configuration doesn’t appear to offer any particular advantage or disadvantage. Both cloth and disintegrating metal belts were used, with cartridges pulled rearward out of the belt pockets and then lifted up to bore level. The bolt tilts upwards to lock into a recess in the top of the receiver, much like a BAR.

Early versions of the Darne were chambered for the 8mm Lebel cartridge, but the gun was quickly updated to the new 7.5mm French military cartridge. Some export guns were also made in 8mm Mauser, and possibly other cartridges. The initial guns were made by Darne in France, but it appears that later production was outsourced to Spain, where it could be done cheaper.

Cowan’s Auctions is has three Darne guns in their upcoming auction of the Richard Wray collection – one flexible-mount AN40 version, and a matching pair of left- and right-hand feed guns set up on an antiaircraft mount. You can see some of their excellent photos of these guns here:

We also have a copy of a 1923 French manual for the Darne, which can be downloaded as a PDF:

The French FR-F2: Best of the Cold War Sniper Rifles

In 1986, the French Army adopted the FR-F2 (Fusil à Répétition F2) as its standard sniper rifle. The F2 was never manufactured new; it was an improvement made on existing FR-F1 rifle by giving them […]

When we left off yesterday, I had a perfect streak going with my FR-F2, but the choice of a .357 revolver for a Brutality match was looking pretty questionable. Well, we’ve got our more stages […]

This Lorenzoni-pattern rifle was presented to King Louis XV of France in the mid 1700s, and is an exquisite example of firearms deemed suitable for royalty at the height of the European kings. It is […]