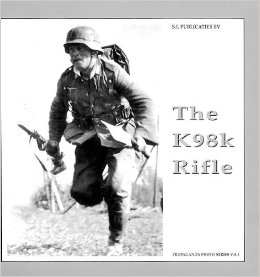 There is an excellent series of books on German WWII small arms being written and published out of the Netherlands – the Propaganda Photo Series. Today I am specifically looking at Volume I, which covers the K98k rifle, but there are 8 other volumes covering everything from the Luger to German antitank weapons.

The format of these books is roughly one third history and explanation and two thirds photographs. The history of the K98k, of course, begins with the adoption of the Gewehr 98 by German states at the turn of the century. The G98 would be the mainstay of German infantry during the First World War, and the book discussed the evolution of the rifle through the WWI-era carbine variants, interwar commercial rifles, and the adoption of the K98k in 1935. It this spends several pages on the different manufacturers, and K98k use by the SS and its sniper variations.

For many people, the section on codes and markings will be particularly useful. It describes the specific manufacturer marks and inspection codes used by the different production facilities (both primary factories and subcontractors) throughout WWII. It really is quite a lot of detailed information packed into about 50 pages total, without the sort of fluff one would typically expect in a book based on photographs.

Photographs (one per page) make up the final hundred pages of the book, and they are divided into several sections based on subject matter. As extra very nice feature is that each photo is accompanied by a significant amount of caption information detailing things like the date, location, and circumstances in which it was taken, and other relevant details as appropriate. The photo sections include:

The photos in this book were chosen from among thousands of photos in various archives, and each one was chosen for a specific reason. Some are staged and some candid, but they all have interesting elements showing a particular moment in the history of a K98k being carried by some soldier. This is absolutely a book you can flip through every day for months and find some new detail every time.

The Propaganda Photo series are not the most comprehensive books on their subject guns, nor the most detailed. But they have an excellent balance of general history, explanation of markings and minutia, description of unusual models, and photographic evidence of how the guns were actually seen in the real world. Guus de Vries and Bas Martens are extremely knowledgeable and passionate about small arms history, and the books they have crafted reflect that knowledge and passion. You won’t go wrong adding any of them to your library.

This specific one, on the K98k, can be purchased from the US distributor directly (Casemate Publishing) or from Amazon. To order in Europe, you can use Amazon or the distributors in Germany, France, Italy, or the UK.

The subject of training machine guns is one of the areas that is particularly difficult to find information on – most folks aren’t even aware of their existence. The one we’re looking at today, the […]

The SS41 was a bullpup, bolt action antitank rifle manufactured in small numbers by CZ for the SS. contrary to common assumption, the SS were not a part of the standard German military arms procurement […]

Pistols for Royalty: the Mannlicher 1900 Standard and Magnificently Engraved

The model 1900 was a transitional pattern of Mannlicher pistol, intended to be an improvement over the somewhat clumsy and underpowered Mannlicher 1896. Only about 250 of them were made, with an eye towards military […]