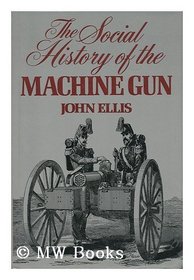 I wasn’t really sure what to expect when I opened up John Ellis’ The Social History of the Machine Gun – machine guns and social histories of anything don’t really tend to go together. Ellis has a fairly extensive list of books to his name, but the jacket describes him as a former member of the Department of Military Studies at the University of Manchester, without claiming the title of Professor.

It doesn’t take many pages before it becomes evident that Ellis is not a “gun guy”. He has a lot of information at his disposal, but he finds no joy or intrigue in the mechanics of guns. As he describes the development of automatic weapons from the Puckle Gun through the Gatling, Maxim, Lewis, and Browning there is an undercurrent of disgust for the men who designed the guns. He really tries to portray them as merchants of death, eager to sell away the lives of other men to make a buck. He makes suggestion of Gatling simultaneously selling to both the Union and Confederacy in the American Civil War, although this suggestion is pretty solidly disproven today. In fairness, he does have to acknowledge the actions of Lewis and Browning in refusing royalty payments for guns sold to the US military. Instead, he simply focuses on the facts that best support his views, like the no-holds-barred subterfuge of Zaharoff (the predominant traveling salesman for Nordenfelt and then Maxim, who was not above lies and bribery to win contracts).

Overall, the tone and viewpoint of the author is what you would, in fact, expect form a “Social History” – it is a tale of detestable white men with guns. However, one can always learn from different perspectives, and this case is, for me at least, an excellent example of that. When Ellis gets into the meat of the book his perspective bring some interesting things to light that I had not had much knowledge of.

The bulk of the book is divided between European colonial use of machine guns and the First World War. The colonial adventures were definitely the highlight of the book for me, with the analysis of the European attitudes towards warfare and how this influenced weaponry and tactics. Basically, the major western powers’ (Britain, France, and Germany) military forces were led by rather conservative types whose experience in warfare was largely based on elan and esprit de corps – the Napoleonic perspective on warfare. That willpower and morale were more important to the outcome of a battle than any particular weaponry that might be used. There is a lot of truth in this, but it must be the beginning of a discussion on tactics, not the end.

In colonial expeditions, the regular notions of proper warfare were left behind, because the conditions were dramatically different. A small expedition fighting against large numbers of indignant natives had no choice but to rely on technology, and it was in this context that machine guns saw most combat prior to WWI. Britain in particular made good use of them in Africa, while staunchly refusing to open the regular Army to their use. Ellis catalogs numerous campaigns and engagements using a variety of early machine guns (both Maxims and manually-operated guns), and the lessons learned by the commanders who used them. Of course, these lessons were generally ignored by the home army as unrelated to continental warfare (especially by the British – the Germans were much more receptive to the new technology). These campaigns are not commonly documented (at least not in my experience), and it was quite interesting to read about them.

The section on World War I is also worth reading, although it covers material that is much more generally known. Overall, there is definitely enough valuable and thought-provoking material here to be worth the price of the book – especially when it can be had used on Amazon for just over $2. At full price I would waffle on whether to buy or not (and probably wouldn’t), but a used copy is certainly worth the purchase price.

Note – the photo above is the cover of the edition I read, but there are several other cover illustrations for different editions

The Bär pistol was designed as a compact gentleman’s defensive arm with a number of interesting features. These include twin barrels and a “cylinder” or chamber block, which held 4 cartridges in a single column, […]

MAS Type 62: France Does the FAL, With a Twist

https://youtu.be/JyLqCKzX5vc In the late 1950s and early 1960s, France was seriously considering joining the NATO small arms standardization. They were equipped with the MAS 49/56 semiauto rifle at this point, and were looking at three […]

Josef Nickl was one of the chief R&D designers at Mauser after the Federle brothers, and one of his pet projects was a rotating barrel military pistol developed from the Steyr-Hahn M1912 pistol. He built […]