Theodor Bergmann was tenacious in his pursuit of a military pistol contract, but the sales of the 1896 and 1897 model Bergmann pistols showed him that a single design could not effectively suit to both the military need for a powerful cartridge and the civilian demand for a small and concealable pistol. In order to pursue both parts of the market, Bergmann split his efforts, scaling down and simplifying the design into the civilian Simplex and beefing it up for the Bergmann-Mars military pistol.

In order to make the Simplex smaller and less expensive, the existing locking system was scrapped in favor of a simple blowback mechanism in conjunction with a new 8mm cartridge. This round was a straight-walled 18mm long case, firing a 71 grain bullet at 790 fps (240 m/s), making it just slightly less powerful than the .32ACP. Compared to the 8mm cartridge from the No.4 1896 Bergmann, the Simplex round is 4mm shorter. The Simplex will not shoot the longer early ammunition, but it seems likely that the No.4 pistols can fire the short Simplex cartridges.

At any rate, the first few Simplex pistols were manufactured by V.C. Schilling in Suhl, Germany (the same concern that manufactured earlier Bergmann pistols) but production quickly moved to Belgium. All reports from the time suggest that the low cost was made possible by the use of mediocre-quality materials and mediocre workmanship. This was a definite change for Bergmann, whose guns had previously all been of quite high quality. Despite this, the low price did attract buyers, and reportedly about 4,000 Simplex pistols were made. There are also reports of Spanish-made copies (thousands of them), although I have not been able to find any firsthand photos or descriptions of these copies. Ultimately, what killed sales of the Simplex was competition from the Browning/FN model 1899/1900 pistol, which set a high standard for pocket pistols of the day.

Unlike previous Bergmann designs (which ejected out the top), the Simplex had an ejection port on the right side of the frame, and did use an extractor. It had a fixed barrel (3.5 inches / 89mm long) and fixed sights, and a manual safety lever on the left side of the frame. Magazines were of a double-stack design, and held 5 rounds, although larger 8- and 10-round magazines were also made. As with the 1897 pistols, the magazines and frames had matching witness holes, so the shooter could see how many cartridges were left in the gun without removing the magazine. The standard 5-round magazine had 3 witness holes but the frames all appear to have been made with 4 holes, suggesting that extended magazines were planned from the beginning, and not an afterthought or third-party product.

Thanks to a recent auction by the James Julia company, we have photos of three Simplex pistols (click any photo to enlarge it). One is a very early production, one mid-production, and one late. Let’s start with the early example:

Here is the mid-run pistol: 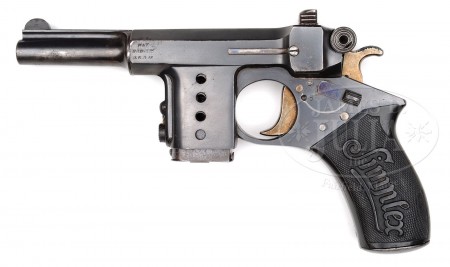 And here is the late production Simplex: 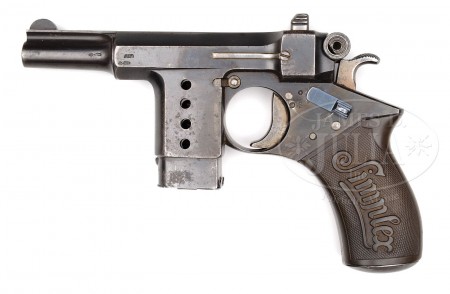 We also have a set of photos showing the internal parts of a stripped Simplex (click to download high-resolution copies):

The subject of training machine guns is one of the areas that is particularly difficult to find information on – most folks aren’t even aware of their existence. The one we’re looking at today, the […]

The Dutch military started looking for semiauto pistols to replace its aging revolvers around 1899. They tested all the early models; the Roth, Borchardt, Mauser and Mannlicher – and then they obtained a Borchardt-Luger (aka, […]