The Vahan is a rifle designed by Armenian inventor Vahan Minasyan. It uses a lever-delayed blowback mechanism similar to the San Cristobal or FAMAS, and is designed for the 5.45x39mm cartridge using standard AK74 magazines (although if you are an interested military or law enforcement organization, they will happily build you rifles in 5.56mm NATO if you prefer).

The rifle uses stamped upper and lower assemblies held together by a pin at the front and a button at the rear. Depressing the button allows the two main assemblies to separate so the bolt can be removed and the internal parts accessed. The safety is a lever located inside the trigger guard, which both blocks the firing mechanism and locks the bolt in the forward position when flipped down. The trigger mechanism is the type popular in some submachine guns, where a partial pull will fire single shots and a complete pull will fire full-auto. 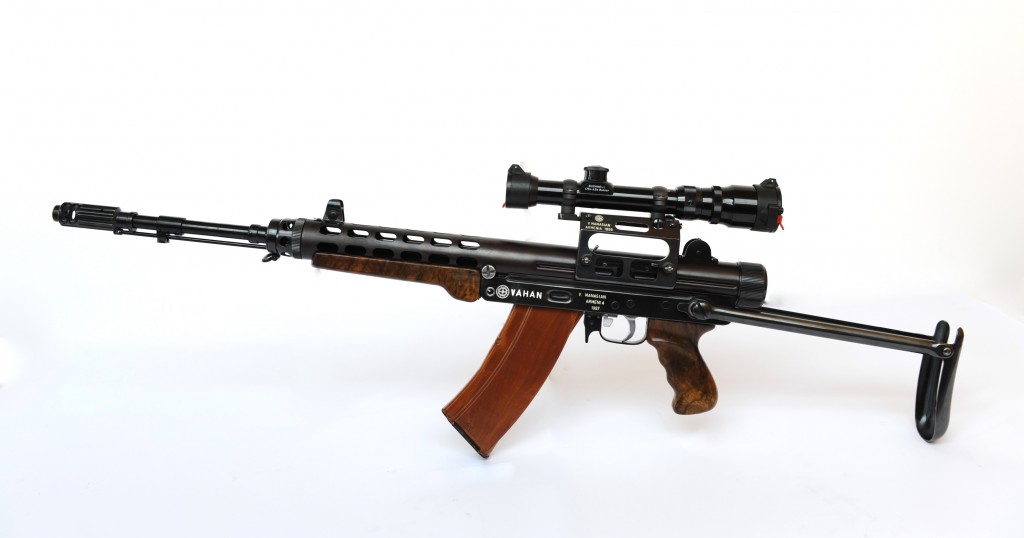 Sights consist of a two-position rear aperture and front post, both with decent protective wings. There is also a Russian-style scope rail fixed to the left side of the receiver to allow mounting of an optical sight.

Thus far, apparently the rifle has failed to attract the interest of any major customers, and has not been put into production. I found it interested to listen to the marketing pitch presented in this YouTube video – the marketing hyperbole gets pretty deep. The spokesman (not sure what his affiliation with the inventor is) talks about it being much simpler than an AK because it doesn’t have a gas system, that is has an practical range of 1000m because of the optics, and that’s simply the best rifle ever designed.

Seems to me that it has some pros and some cons. The lever-delayed system is a good one, with the understanding that it tends to be pretty sensitive to the specific pressure curve of the ammo it’s designed for. Change the bullet weight or powder type, and it may not work so well anymore (see: FAMAS). The position of the scope looks terrible, and the underfolding stock is one of the least-comfortable designs of folding stock ever devised. I’m not sure what I think about the semi/full mechanism – it means one less control on the gun to deal with, but I wonder how susceptible it is to shooting unintentional bursts when under stress.

Thanks to our friend Hrachya for assembling the information and photos of the gun! He also sent us the Armenian patent for the rifle, which describes the details of it’s lever-delaying mechanism. For those of us who don’t read Armenian, Hrachya also  graciously provided an English translation of the text. Thanks Hrachya!