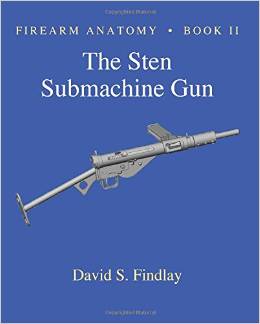 Regular readers may recall that about a year ago I wrote a review of Firearms Anatomy I: The Thompson M1A1 Submachine Gun by David Findlay. It was a very neat book covering the Thompson from a totally different view than other books; it explored the actual mechanical engineering behind how the Thompson operates. Well, Mr. Findlay has just recently released Book II in his Firearms Anatomy series, and this one is on the Sten Submachine Gun.

The book is similar in layout to the Thompson, with a brief history of the Sten (it is particularly impressive to realize that only 36 days elapsed from initial concept approval to the completion of the first firing prototype, and more than 3.75 million of the guns would eventually be made), followed by several chapters of mathematical and engineering analysis of the design, and a complete set of reverse-engineered technical drawings for a MkII Sten.

The analysis begins with two methods of calculating rate of fire as a function of several variables. The first method is calculations assuming conservation of energy (ie, that the bolt will have an equal amount of energy as the bullet) and the second is using the Working Model 2D software package (the software is not included with the book, to be clear – this is an explanation of the variables used to solve the problem). For a simple blowback submachine gun, the rate of fire is the mathematical heart of the system, and it allows you to understand the impact of changing bolt mass, spring strength, receiver length, friction of the bolt, firing angle, and elasticity of the bolt bouncing off the rear of the receiver. Once you understand the relationship between these factors, you can design a blowback action to fit whatever parameters you like. It’s not the only element of design (others would include trigger mechanism design, magazine design, feed geometry, etc), but it is a particularly important one.

Once we get out of this math, Chapter 4 is a brief discussion of metallurgy and heat treatment. Not much about why specific alloys and heat treats are chosen, but more than you will usually find on what choices are typical for which applications. Chapter 5 covers barrel design – a subject not included in Book I on the Thompson. Barrels are actually rather simple from an engineering perspective, and Findlay uses the chapter to show how one calculates tangential, radial, and axial stresses, and how to arrive at a barrel wall thickness based on those stresses combined with cartridge pressure and material strength.

Chapter 7 is a brief commentary on feed geometry which will provide the interested reader with the basic problems of designing a firearms feed system. It does not get into methods of solving these problems, though, as this work was basically sidestepped on the Sten by using the existing magazine and feed layout from the German MP-28.

I should also take a moment to point out Mr. Findlay’s qualifications for writing a book like this. He has spent an entire career in firearms design, including 26 years at Remington (which did not include any time spent on the new R51), followed by a stint as a designer and engineering lead for Marlin and H&R, and finally his current position as an engineer for Smith & Wesson. If that weren’t enough, he also hold 8 of his own firearms-related patents.

This book on the Sten is a great resource for the aspiring gun designer. It has a lot of the information needed to really understand how this type of firearm works at the purest level, and will point you in the right direction for the questions it doesn’t answer directly. It is printed independently by Mr. Findlay, and available on Amazon:

The Webley Model 1911 is a single-shot, self-ejecting target pistol made only for a few years. It was fitted with a long barrel to increase sight radius and also a detachable shoulder stock for those […]

Hiram Maxim was the first person to create a truly practical and functional machine gun, based on a patent he filed in 1883. He pioneered the recoil operating system – the concept of harnessing the […]

From 1887 onward, the gun Hiram Maxim was producing was what he called the World Standard. He had finally perfected the machine gun design to his satisfaction in 1887 and with this design in hand […]