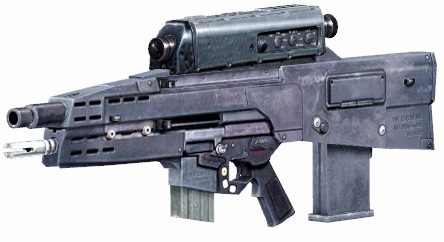 We often get email asking if we are going to write about some forgotten weapons that are relatively recent developments, like the OICW for example. We would like to have more coverage of some of those sorts of guns, but our experience and access tends to be with older items. However, the fine folks over at Weaponsman (who are much closer to ongoing arms development than we are) just recently wrote an excellent article on the OICW, and so we’re going to weasel out of writing something and suggest instead that you drop by over there and read The Past is Another Country: Objective Family of Weapons.

Today we are looking at the Winchester company’s entry into the 1964 SPIW (Special Purpose Infantry Weapon) trials. The SPIW program was an attempt to increase small arms lethality by increasing hit probability with ideas […]

This revolver, designed by Fordyce Beals (how cool of a name is that?), was developed while Colt’s patent on using the hammer to index the cylinder was still in effect. To avoid that patent, this […]

Back before World War One, when Abercrombie & Fitch was still a true sporting goods company catering to the likes of Joseph Steinbeck and Theodore Roosevelt, they decided to offer Luger pistols for sale. This […]