In the minds of Western people, the inhabitants of the USSR may sometime look like ants; a large mass working towards one great goal without personal ambition. This, of course, could not be further from the truth. Soviet people were not much different from any other nation and as it often happens more talented individuals tended to have particularly complex personalities. In particular, no weapon designer believed that his tank, aircraft, or machine gun was less deserving than the rest. Pride, ambition, envy, and adamant confidence that their work is the best guided them even to the point of protesting state trials results. 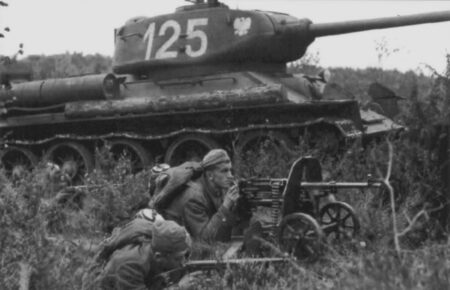 During the WWII, supervising Soviet arms production was anything but an easy job. Balancing the urgent demands of various Army branches with ever changing capacity and capability of Soviet industry demanded unprecedented ruthlessness. It should not come as surprise that Stalin chose Lavrenty Beria, his closest comrade and the infamous chief of NKVD, Soviet secret police, to do it. As part of this job, Beria spent a lot of time and effort trying to navigate the tensions and ambitions of weapon designers. One of the strange things that happened at that time related to the name of the new heavy machine gun in 1943. Here is what Vasily Degtyarev writes about it in his memoirs (ca. 1950):

“An extremely valuable contribution to the armament of the Soviet troops was made by the untimely deceased highly talented designer Goryunov. He had been worked with us for fifteen years. Known as an amazingly skilled craftsman, he had never shown himself as an inventor or designer.

And suddenly, first light on a summer day of 1942, Goryunov came to me with a large package.

– Vasily Alekseevich, could you take look at the model of my machine gun? I was going to see you many times but I was somehow shy.

I examined Goryunov’s model and, I confess, could not believe my eyes. The model encompassed all the latest advances in weapon automation.

– I’ve been thinking about it for quite some time but only assembled the model recently as I’d heard that we were tasked with creating a new heavy machine gun.

The wood, tin and cardboard model was executed in a truly bold and original way. I invited Goryunov to join the design bureau, asking him to pick out a couple of reliable assistants. On the same day, he brought in his nephew Mikhail Goryunov and the master locksmith Voronkov. “

However, I highly doubt that this conversation went as described or even took place at all. I discovered the “Minutes of the meeting of the technical commission for the consideration of projects of a 7.62 mm caliber heavy machine gun developed by the designers of plant No. 2 on May 15, 1942“. Here’s what it says:

“The project of the designer Goryunov is a more complicated version of a light machine gun design by the same author, with an ammo feed design similar to the Yurchenko machine gun. The project does not deserve attention.”

The protocol was signed by Bugrov, the chief engineer of the Design Bureau No. 2 (KB-2), but it also carried a special note that “All projects have been reviewed and conclusions have been made jointly with the Hero of Socialist Labor V. A. Degtyarev.” Thus, in striking contrast to what the post-war memoir states, the first reaction of the KB-2 leadership to Goryunov’s project was negative. Also, the KB-2 management appear to have been well aware of the project prior to its demonstration and the fact that it had been based on the GVG, an earlier LMG design by the three designers – Goryunov, Voronkov, Goryunov.

Before continuing, it is necessary to draw the attention of the reader to one important administrative-bureaucratic point. Vasily Degtyarev was the head of KB-2. However, the machine gun factory No. 2 also had its own design department. This in-house design bureau, where machine guns were both designed and built, was essentially competing with KB-2. When Gorynov et al moved to Plant No. 2, it was this in-house design bureau that they joined. Chief Engineer of the plant G.I. Markelov and the Chief Designer of the plant A.F. Popov followed the work of the GVG machine gun designers.

Petr Goryunov, together with his nephew Mikhail Goryunov and master-locksmith Vasily Voronkov, managed to design a test-ready GVG prototype already in 1941. In early 1942, a revised version was ready. In May 1942, an inquiry regarding the progress of the highly anticipated GVG was sent to the People’s Commissar of Armament Ustinov and the head of the Main Artillery Directorate Yakovlev by Beria himself. The Soviet leadership was very interested in the new light machine gun. At the same time, judging by vast amount of various correspondence, Dyagterev was working on a competing 7.62mm LMG, which was approved only in April 1942 subject to a long list of comments and suggestions.

In September 1942, the Red Army held a multi-stage competition for a new machine gun. The GVG LMG (under the name of SP-GVG) was recognized as the best, surpassing, among other, Degtyarev’s newest model, the DS-42. As you would expect in the time of war, SP-GVG want into production asap. In February 1943, the plant reported that the first batch of 50 guns was factory-tested. On March 3, 1943, the People’s Commissar of Defense (that’s Minister of Defense in Soviet-speak) awarded the three designers with a cash prize of 5,000 rubles each. To put this in context, destroying a tank at the frontline would net a soldier 500 roubles. 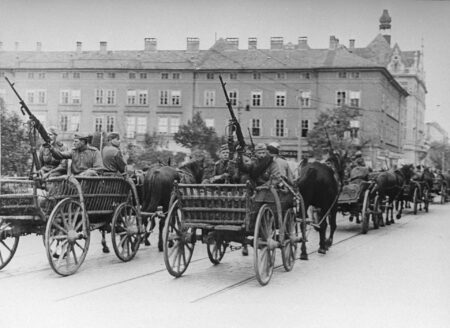 Then the first serial SP-GVG was sent for military trials. There is a legend that they again competed with the DS-42, but this was not the case. The new machine gun was compared with the old “Maxim”. The tests took place in April-June 1943, both at the front line and in the rear of 1160th platoon 352nd division. At this stage, in all documents, the new machine gun was still referred to as SP-GVG or simply “mounted GVG”.

However, the SP-GVG went into full-scale production as SG-43. Why and at what point the SP-GVG lost the initials of two of its designers and became SG-43 (Goryunov’s mounted) remains a mystery. Some say that the renaming was due to standardization and for the sake of brevity. I highly doubt that as abbreviating three designers into an official name was not uncommon in the USSR, e.g. LaGG-3 fighter by Lavochkin, Gudkov and Gorbunov. Others believe that this was to honor Petr Goryunov, who passed away in December 1943. This seems even more unlikely as the renaming took place no later than May 15, 1943 (the official date of signing SG-43 into production) and 41 year old Goryunov was apparently feeling well enough to personally fly to Moscow to take part in the process.

My inquiry to the historians of Kovrov remains unanswered. 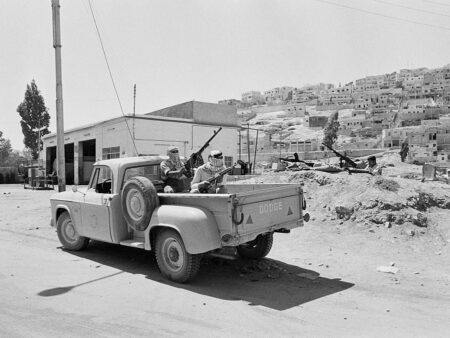 DTM: The Soviet Tank Version of the DP-27 LMG

Almost as soon as the Degtyarev DP-27 was put into Soviet military service, variations were developed for aircraft (DA) and tank (DT) use. The tank pattern we have here is actually a later improved DTM […]

This is a very interesting WW1 heavy machine gun. It is a Russian M1910 Maxim that was repaired at some point using the brass jacket from a 1905 Russian Maxim. This may have been done […]

As World War Two developed, the Soviet Union found that bayonets were frequently lost from its M91/30 Mosin Nagant rifles. The standard bayonet, as adopted all the way back in 1891, was a long spike […]