Happy Independence Day to all my American readers, and a happy Friday to everyone else! I’ve had a bunch of items come across my desk that aren’t really enough for their own posts,so I figured I’d lump a bunch of them together for you today.

1) A few days ago I spent several hours on Reddit answering all sorts of questions. It was a lot of fun (and more civil than I had expected), and the thread is still around. If you want to kill some time seeing what my opinion is on various gun things, you can browse through this: Forgotten Weapons: Ask Me Anything.

2) I have a brief video of an M18 Hellcat tank destroyer firing. I took this footage at a machine gun and cannon shoot a little while back. Didn’t have the tme or opportunity to do a more comprehensive video, but the firing alone is pretty neat (I can only wish I’d had the Edgertronic for that range day!):

3) Thank to Grant Cunningham for noticing this – British Pathé has put all their archival footage online. For those who aren’t familiar, Charles Pathé was a pioneer in motion picture technology, and the creator of the newsreel in 1908 – essentially the YouTube of its day. For more than 60 years, his company British Pathé had camera crews all over the world filming a mind-boggling array of history as it was being made. They charge for professional licensed use of the footage (and you will recognize some of the particularly significant events from TV and movie usage), but they now have the entire collection available online for free viewing. WOW!

I hardly know where to start to describe the depth of this video archive. In total it contains about 90,000 items, including things like the Hindenburg fire, Emily Davidson throwing herself under the King’s horse in 1913, Queen Victoria’s funeral, the Wright brothers’ first flight, and far more. A quick search for “rifles” turned up these two, among many others: Demonstrating the EM-2 and demonstrating the new FAL.

There is an immense amount of material here, and if you are not careful you will start watching it, and then look up and realize several days have passed.

4) One of the folks on Reddit asked me about a photo he had found of what is apparently a speedloading device for a single-shot break action shotgun. I’ve never seen it before – any thoughts? 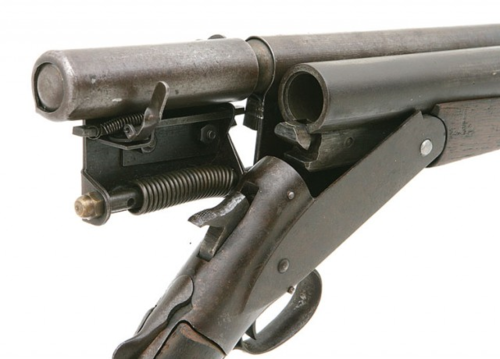