We’re happy to have another article by Ronaldo Olive today (reprinted with his permission – and originally found in Harris Publications’ SPECIAL WEAPONS FOR MILITARY & POLICE, 1991) – this time on the INA 953, Brazil’s domestic variant of the Madsen submachine gun. Many folks don’t recognize the great amount of interest weapons history and development that took place in South America, and as a native Brazilian, Ronaldo has lots of firsthand experience with some of these neat guns. In addition, we found a copy of an original 1954 manual for the INA 953 (in Portuguese) in our archives, which you can download at the end of the article. So without further ado, I’ll turn you over to Ronaldo:

Designed in 9mm in Demark in the mid 40s, modified and manufactured in Brazil in .45 ACP in the early 50s, and now converted back to 9mm in the late 80s…

The end of the Second World War witnessed the submachine gun transformed into a cheap, mass-produced weapon which could be made at a fraction of the cost of standard rifles and, in many instances, cheaper than semi-auto pistols. Widespread use of pressed steel components in the place of expensive and time-consuming machined parts was the rule, as exemplified by the German MP-40, the British Sten, the American M3, and the Soviet PPS-43, among others. At about the same time, the trend was also apparent that the SMG would grow in acceptance as a law enforcement weapons, mainly in Europe and Latin America, whose police and paramilitary organizations frequently used guns similar to the ones in the local Armed Forces’ inventory.

The situation in Brazil was very peculiar, indeed. The first submachine gun to be officially adopted in the country was the German MP-28-II (in 7.63mm Mauser caliber), not by the Army, but by police forces. It was not until about 1943-44 that the Armed Forces were to start handling subguns, when US advisers were sent to the country to train local troops with the armament they would employ alongside the American V Army. As far as SMGs were concerned, these included M1A1 Thompsons and M3A1 Grease Guns, both firing the .45ACP round.

With the end of hostilities, the military saw that they did have a definite niche for buzzguns in their inventory to equip MPs, armored vehicle crews and the like. The US-supplied M1A1s and M3A1s did not exist in the required quantity, so a new gun was in order. And it should be domestically produced in such numbers as necessary to become a standardized military and police weapon. Having no previous experience in designing and manufacturing this sort of firearms, the Brazilians opted for a foreign gun whose production techniques were simple and – principally – easily transferable to the local industry.

The eventual choice was the Madsen M1946, a 9mm caliber SMG introduced by the Dansk Industri Syndikat, of Copenhagen, Denmark, shortly after WWII. Production arrangements were made, and this was carried out by INA – Industria Nacional de Armas S/A, or Sao Paulo, starting in 1950. Initial weapons were designated M950s, followed by a slightly modified version, the M953. In Brazil, however, the gun has always been called simply “the INA.”

Since the standard military pistol/SMG cartridge at the time was the .45 ACP, the Brazilian INA was modified to fire it, the original Madsen weapons using 9mm Para ammunition. For the record, I recall having seen (but, unfortunately, not photographed) a Danish variant which was chambered for .45 ACP although none of my reference sources mention its existence. There were some NATO markings on the receiver, but this is all I can remember. Shame on me! [We have a Madsen M50 manual which also mentions that the gun can be built in .45ACP – Ian]

The INA is primarily made from heavy sheet stampings. Its body consists of two metal frame, hinged at the rear, which are shaped with integral pistol grip and magazine housing. When closed, the two shells form the receiver unit. The whole thing is held together by the barrel retaining nut, which is threaded into the fore-end of the two halves. To ensure a rigid magazine fit and help hold the body closed, there’s a wire loop at the lower end of the magazine housing. Actually, the left half acts as a lid on the right side of the frame, and carries the two sling swivels, as well as the sights.

Unlike the original Madsen M1946s, M1950s, and M1953s, which had the cocking piece on top of the receiver (making it more ambidextrous in nature), the INA had it moved to the right side. The metal tubular buttstock, hinged at the lower end of the pistol grip and at the rear of the receiver, folds to the right side of the gun. Spring-loading alone takes care of keeping it in either position.

For about twenty years, the weapon gave a good account of itself in the hands of the Brazilian Army, Navy, and Marine Corps (the Air Force was never officially issued it), as well as civil police and paramilitary forces. In the early seventies, however, the Armed Forces decided to switch to the 9mm Parabellum cartridge for its pistols and submachine guns. In the latter case, the Beretta M12 was eventually adopted as the Mtr M9 M972 (Metralhadora de Mao 9mm Modelo 1972, or Hand-held Machine Gun 9mm Model 1972), and the old INA was relegated to second-line troops and law-enforcement use only.

But the very large stocks available of used – but still usable – guns in the military warehouses prompted ideas coming out here and there on doing something about them. Very early in the eighties, one Major Correa Lima, who at the time served in the Army Arsenal de Guerra (War Arsenal), General Camara, Rio Grande do Sul State, made a conversion of the INA from .45 ACP to 9mm Para. He filled the magazine walls to accommodate the smaller rounds, adapted the bolt accordingly, moved the ejection port from the right side to the top of the receiver, and added a three-slot compensator to the new barrel, among other minor modifications. The “new” SMG worked pretty well, but was to remain a one-of-a-kind prototype.

A short time later – coincidentally or not, when the same Major was heading the Research Department of IMBEL’s Fabrica de Itajuba, in Minas Gerais State – the Brazilian Army decided that the transformation idea should be carried ahead. The initial idea was that IMBEL would make the transformation kits (barrel, bolt, magazine, etc) alone to be shipped to different Army units so that actual conversion work could be carried out be the local armorers. In the event, though, this did not come to fruition. Apparently, many of the stored weapons were not exactly in acceptable conditions, with varying degrees of repair work being necessary to make them closer to “as new” as possible.

Time elapsed, the modifications were further refined and guns began to be updated by Fabrica de Itajuba itself, these having already found their way into some State Police inventories. A five-slot compensator identifies the early rebuilt INAs, which, however retain the original full-auto-only capability. Although this may be acceptable for the military, this is not the case if police use is involved. Even if Brazilian policemen, as a whole, train very regularly and frequently with automatic weapons – which they sure don’t – a non-selective fire SMG can be one big headache for city use, which, after all, is the rule rather than the exception. Enter the latest INA transformation.

The IMBEL guys have modified the firing mechanism so that a three-position fire selector, located on the left side of the frame just above the trigger, can be used. Within an arc of 180 degrees, one will find “A” (Automatic) at the rear; “S” (Safety) top; and “R” (Repetition) forward. A more usual S-to-R-to-A sequence was not used, according to the manufacturer, because this would involve a more complex (and costly) rework, which was not desirable. The lever settings are visually duplicated on the receiver’s right side, so that an instructor can immediately know what his trainee is up to…

Two other minor changes will be noticed by longtime users of the INA…or Madsens. One is the lengthening of the folding stock, so that when the buttplate is in the forward position it does not interfere with either the grip safety lever [which is located on the back of the magazine housing – Ian] or the magazine catch. This allows the use of the gun with the stock folded, not really a recommended procedure but an eventual necessity in emergencies. 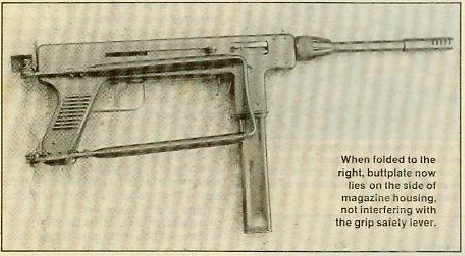 Another is the addition of a box-like structure at the rear end of the receiver. It is because, in this weapon, the recoil spring guide rod protrudes during firing, and the last thing a shooter (even a macho one) wants is to get hurt with the very weapon heis using. Although the rod’s length was reduced, it still projects slightly from the gun’s rear, and the little box was added just in case.

I loved the way IMBEL’s “new” INA handles and fires. At slightly over 4.5kg (9.9 lb) with a full 30-round magazine, the weight is roughly the same as the original’s. The milder recoil of the 9mm Para round, as compared to the earlier .45 ACP, enhances accuracy overall. Roughly the same is the cyclic rate of fire, about 620 rounds per minute, but here the excellent compensator fitted to the gun does make a substantial difference, to the positive side, of course.

By February 2001, IMBEL had converted about 5,000 INA submachine guns to 9mm. Of these, a thousand were delivered to the Brazilian Army, and the remainder to at least seven different State Police agencies. 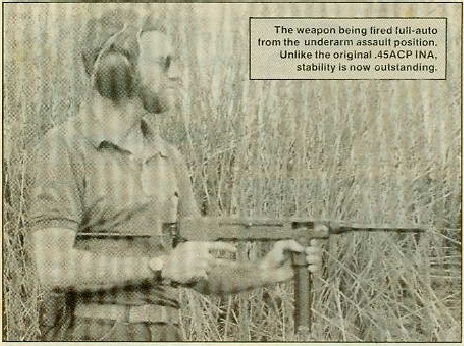