The basic technology for the Army’s fancy high-tech M68 CCO (the Aimpoint) was first patented all the way back in 1900. The concept of the reflex sight, in brief, is that ambient light is used to reflect a reticle pattern through a lens into a shooter’s line of sight. When properly mounted on a gun, that reticle can be used for aiming. The first reflex-type gunsights were mounted in fighter aircraft in late World War I, and by World War II they were standard equipment. Up to that point, though, they were fairly bulky and fragile, though, and so the market for reflex sights on small arms didn’t really show up until the end of WWII.

One of the first commercially fairly successful such sights was the Nydar Model 47, made by the Swain Nelson company and introduced in 1945. It was intended as a sight for shotgun hunters, to aid in firing on flying birds (basically the same application as when used in fighter aircraft). We had the chance to take a look at one recently, and it’s pretty neat:

The main lens is fairly large by today’s standards, close to 1.5 inches. The reticle is a white bullseye pattern, and is a bit dim but definitely visible (I would rate it as more visible than the integrated sight on the FN PS90). 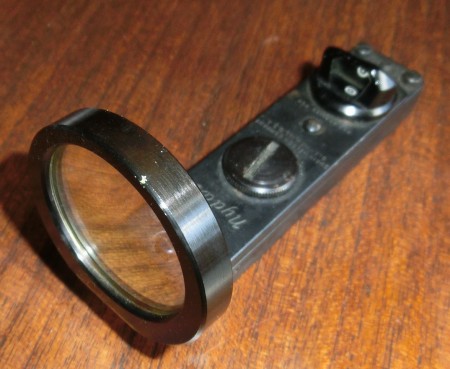 The reticle looks better in person; it was a bit tricky to get a photograph of it. As with today’s optical sights, multiple different mounting bases were made so that the standard sight unit could be attached to a variety of different shotguns.

We haven’t tried actually using one of these, but the general consensus is that they were a bit fragile. They never really became popular, and it was really only with the fairly recent military acceptance of close-range optical sights that popular interest in them has really become widespread.