I recently picked up a new carry pistol…it’s about 65 years old, rattles a bit when you shake it, has a bit of pitting on the slide, and the finish is worn off all the corner and edges. I think it’s a great carry piece. It’s an Argentine Ballester-Molina, surplussed from Argentina Navy service and it cost me all of $300. I have a pile of handguns to choose from, so one might wonder why I would choose something with so many perceived negative characteristics… 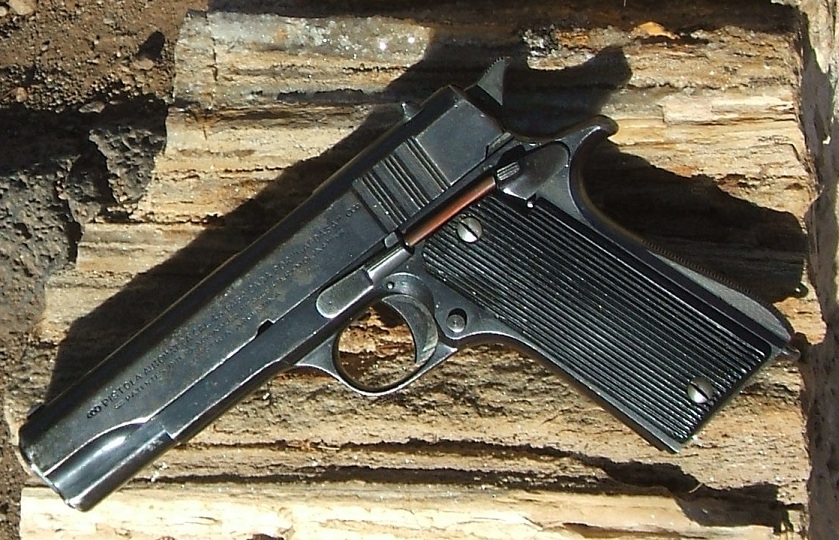 Let me say first off that I am not – and don’t pretend to be – a commando, mall ninja, “sheepdog”, “operator”, or Charles Bronson. I have taken some professional firearms training and spent several years having my ass handed to me in bullseye competition, but there are scads of people out there who are faster and better than me with a gun. So the notions I’m about to lay out should be taken with a big grain of salt.

One thing I have gained from having spent time handling and examining lots of old and obscure firearms is that arms technology really hasn’t changed much in the past half century or more. Materials science has made some big advances, but the mechanical designs of pistols really hasn’t. Most of the common handguns being manufactured today are still using a Browning-style tilting barrel locking into a steel slide. They use double-stack magazines now (1930s tech), and often polymer frames (1950s tech) and strikers instead of external hammers (pre-1900 tech), but at the same core design. So as I look for a carry gun, I’m not prejudiced against models older than my parents.

Also, I like the idea of carrying a pistol made for military service. Most of the time, military testing does a good job of weeding out poor designs and finding guns that will function reliably in pretty adverse conditions. Especially when you find a period where a nation was upgrading its arms during peacetime, the chances are pretty good that the new guns will be good ones. That is the case with my Ballester-Molina, which was manufactured in about 1946.

I have always found the 1911 pistol to fit my hand and point very well for me, and the Ballester-Molina retains that same basic profile of the 1911 with some improvements. It does not have a grip safety (which I think is an unnecessary complication), and does have a very effective beavertail that actually prevents the hammer from biting (unlike the lousy stock 1911 beavertail).

The Ballester-Molina, like most 1911-style pistols, has a single-action trigger and manual safety. This system has generally lost favor in today’s world to mechanism like the Glock’s. The longer trigger pull of those guns has prevented countless ill-trained police officers from shooting themselves in the thigh as they reholster, but I would like to think that I am conscientious enough to not need that assistance. I prefer the short, crisp break of a good single-action trigger. I think it even makes up for the small military-style sights on my Ballester. Given the choice, I would rather have small sights and a good trigger than a poor trigger and great big sights.

Lastly, the rattle. I think a lot of people would immediately reject a pistol that rattled, but to me it says that there is clearance between the slide and frame and the gun will continue to run when it gets dirt, lint, powder residue, Cheeto crumbs, and anything else in it. The 1911 is an inherently less accurate design, with the barrel bouncing around inside the slide. If you tighten up all the clearances to the ten-thousandth of an inch to get really excellent groups (or just on the theory that money put into a gun must somehow mean it becomes better), you also cripple its ability to run in adverse conditions by allowing a single little piece of grit to lock up the slide/frame movement. Yes, I want a gun that will shoot to point of aim and maintain reasonable groups – but I’ll leave the match gun in the safe when I’m picking a pistol that I may have to depend on.

Ultimately, the outcome of a dangerous incident will depend mostly on your mindset and skills, not the particular hardware you’re carrying. So why not take the road less traveled and add some flavor to your daily carry?

We don’t have very much information on the Halcon SMG from Argentina, but we do have a training manual for the gun to make available. As best I can tell there were at least 5 […]

During World War Two, the British government contracted for about 8,000 Ballester Molina pistols from HAFDASA in Argentina. They were produced between 1942 and 1944, and are easily identified by the application of a second […]

I’ve been looking forward to shooting one of the local 2-Gun Action Challenge Matches with a Swiss straight-pull rifle for a while now, and had the chance this past weekend. I was debating between using […]