There is a common assumption that the MAS-36 was a fool’s errand from the outset – why would a country develop a brand new bolt action rifle in the mid 1930s, when obviously semiautomatic combat rifles were just on the cusp of widespread adoption? Well, the answer is a simple one – the French were developing a semiautomatic rifle at the same time, and the MAS-36 was only intended to go to rear echelon and reserve troops. It would serve as a measure of economy, reducing the number of the more complex and expensive self-loaders necessary, while still providing sufficient arms to equip the whole reserve in case of a mobilization.

Well, the plan didn’t quite work out that way, because Germany invaded France before the semiauto rifle was ready for production (it was, at that point, the MAS-40 and was in trials). Not until 1949 would the self-loader go into mass production with the MAS-49 (discounting the short-lived MAS-44). With this in mind, the MAS-36 suddenly makes much more sense. It is a simple, economical, and entirely adequate rifle without extraneous niceties. In a word, it is a Russian rifle rather than a Swiss one.

Production began in the fall of 1937, and by the time of the German invasion there were about 205,000 in French stockpiles. They saw extensive use in the Battle of France, along with M34 Berthiers in 7.5x54mm. Some would escape to serve the Free French forces worldwide through the war, and others would be captured and used by German garrisons in France and along the Atlantic Wall. Production resumed upon the liberation of St Etienne in 1944, and by 1957 about 1.1 million had been made. They basically fall into two varieties, with several pre-war milled components changed to more economical stamped designs after the war.

Get the shirt here: 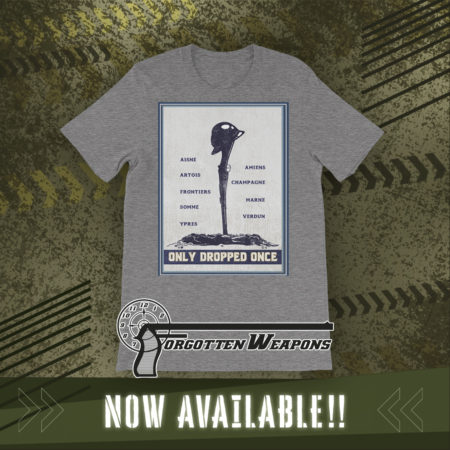 Arcelin Mousqueton: An 1850s Breechloader with a Ludicrous Bayonet

The Arcelin system was a capping breechloader provisionally adopted by the French military in 1854. It was a bolt action system with a folding bolt handle, firing a paper cartridge. It impressed Emperor Louis Napoleon […]

Patrick Hernandez is a noted collector of French rifles here in the US, and a moderator of several French firearm discussion channels – so when it comes to deciphering the markings on a French […]

The 37mm gun was found in many guises during World War One – that caliber was the smallest allowed to use exploding projectiles by the 1899 Hague accords. Every nation in the world, it seems, […]