Rafael Mendoza was a veteran of the 1910 Mexican Revolution and had a natural talent for arms design. In 1920 he found employment at the National Arms Factory in Mexico City, and began work on the side designing his own light machine gun. He completed his prototype by 1932, and the weapons was submitted to Army trials in October of that year. The testing went very well for the Mendoza LMG, and is was officially adopted by the Mexican military in December of 1933 (after a few refinements were made to the prototype with the aid of American engineer M. H. Thompson). Full-scale production commenced on June 6, 1934.

The B-1933 Mendoza was a reliable and well-designed light machine gun. It featured a quick-change barrel (the mechanism for which Sr. Mendoza was granted a US patent), offset top-loading magazines (allowing the advantages of that mag configuration while still allowing the sights to be directly over the bore), and a firing rate of just under 400 rounds per minute (from an open bolt). It was chambered for 7mm Mauser, which had been the standard cartridge of Mexican armed forces since President Porfirio Diaz adopted it with the 1895 Mauser in that year. The Mendoza magazine has a 20-round capacity, and is very similar to a 7mm Madsen magazine. The two can be differentiated by the fact that the Mendoza mag sits to the right of the receiver, while the Madsen mounts on the left.

One particularly innovative detail in the Mendoza design is the use of a fully symmetrical firing pin, with usable tips on both ends. In case of breakage, this allows the firing pin to simply be reversed in the bolt and continue to function until it can be replaced with a new part.

The Mexican TO&E saw the Mendoza issued either to 4-man infantry teams or 2-horse cavalry units. In its infantry role, the gun was supplied with 1,000 rounds of ammo in 50 magazines, while the standard cavalry loadout was 860 round in 43 magazines. Both units were also issued a spare parts kit and magazine carriers.

The Mendoza was refined and updated in the late 1940s, to allow simpler manufacture and rechamber it for the .30-06 cartridge (which was adopted by the Mexican military after WWII, along with surplus US M1 Garand rifles). This updated variant was designated the RM-2, and was adopted to replace the B-1933 Mendoza. 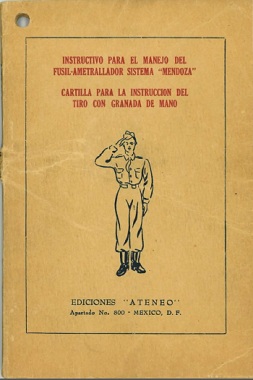 Instructions for Using the Mendoza Machine Gun – printed 1948 (in Spanish)