John L. Hill was a World War One fighter pilot who went into the oil and gas industry, and enjoyed tinkering with guns in his free time. In 1949 he got an idea for a new style of magazine and feed system, which he developed and patented in the early 1950s. Hill’s intention was to create a submachine gun for the military or police that held its magazine flat atop the action, instead of sticking out of the gun where it would get in the way. To do this, Hill designed the system that would be later used in the FN P90, with ammunition held perpendicular to the barrel, and a turret mechanism in the action to turn the cartridges 90 degrees for feeding in the chamber.

Hill built 7 or 8 fully automatic prototypes, which were examined by the US Army and the FBI. One was tested at Aberdeen Proving Grounds in 1953, and we still have some of the photos from that examination (that particular gun was guilt using an MP40 barrel, interestingly). Hill’s guns varied in pretty much all details, including different barrel lengths, stock configurations, and magazines. Some used single stack and some double stack magazines, but all were a simple blowback action.

At some point in the late 50s or early 60s, Hill sold his patent rights to a pair of Texas businessmen who built 90 or 100 more examples (mostly semiautomatic) under the name H&B Enterprises. They took one to FN in Belgium, who found it interesting but did not opt to license or produce it. Ultimately, nobody was interested enough to put the gun into production, and only a small number of the H&B guns survive today. The original Hill prototypes were donated to the Lone Star Flight Museum in Texas in 1993, although it is not clear where they are today.

When FN began to design the P90 in the early 1980s, Hill’s concept made a return. It is not known exactly how much direct link there was between the Hill prototype and the P90 concept, but the eventual patents filed on the P90 do reference Hill’s patents (among others). The P90 remains the only production firearm to use this clever rotary feeding system. 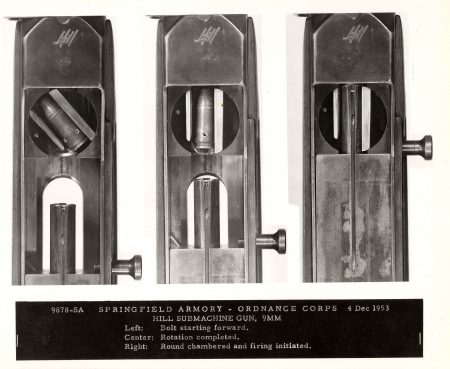 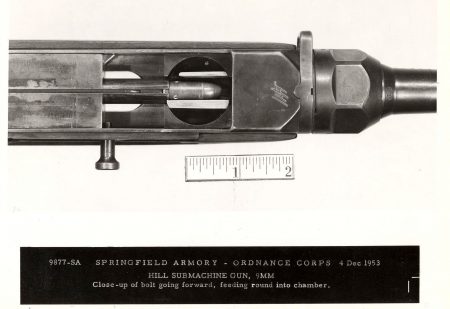 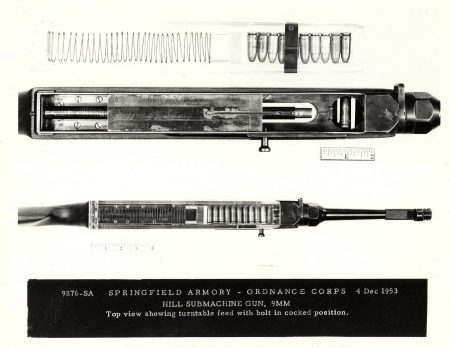 In the aftermath of their rejection in the US 1907 pistol trials, Joseph White and Samuel Merrill continued working on handgun designs. In 1911, Merrill wrote to the Ordnance Department to inquire about whether they […]

Charles Manville developed this weapon in the 1930s as a riot control tool, and they were built in 12ga, 25mm, and 37mm. We should point out that the 12ga version was for tear gas rounds […]

Book Review: Bullets by the Billion

Bullets by the Billion is a short book (77 small pages of large print) written by one Wesley Stout and published by the Chrysler Corporation on 1946. It was a company project to commemorate the […]