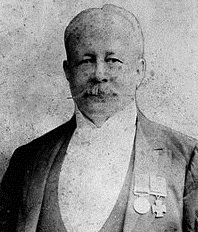 Patented in 1896 and going into production in 1901, the Webley-Fosbery Automatic Revolver was the brainchild of British Col. George Vincent Fosbery, VC. Fosbery was a career military officer who had served in India for many years (and won his Victoria Cross there in 1863). He was also an avid fan of guns and firearm technology, and the Webley-Fosbery was only one of his several relatively successful inventions (others include an exploding bullet used largely for range-finding and the Paradox system for shooting shot or ball relatively accurately through the same barrel).

Fosbery’s rationale for the self-cocking revolver was a search for a sidearm that would combine the rapid fire and crisp trigger of the automatic pistol with the heavy .455 cartridge of the British service revolver. The automatic pistols available in the late 1890s were virtually all chambered for rather small cartridges, and Fosbery believed that large projectiles were much better suited to combat (proving in addition that nothing changes over time, as this theory and its opposite continue to be argued back and forth to this day). So Fosbery devised a way to harness the recoil energy of a revolver to recock the hammer and rotate the cylinder. His initial model was based on a Colt SAA, but after finding Colt uninterested in the idea he began working with the Webley company, and his production guns are based on their standard revolver.

Mechanically, the Webley-Fosbery operates by virtue of the barrel and cylinder assembly being independent of the grip assembly, the one riding in grooves machined into the other. Thus when fired, the grip stays in place and the barrel and cylinder assembly slides back, while a cam pin running in the conspicuous cylinder grooves rotates it to the next chamber and recocks the hammer.\

This system worked well when clean, and gave a shooter a constant single-action trigger pull, a full-power .455 service cartridge, the capacity for quite rapid fire (as fast as any semiautomatic pistol), and also absorbed some of the recoil from that relatively large cartridge.

The Webley-Fosbery is one of the few revolvers to feature a manual safety, which was necessary because of its manual of arms. The trigger mechanism was single action only – so you could not carry it with the hammer down and fire by just pulling the trigger. Instead, the piece needed to be cocked (either by the hammer alone or by manually pushing the upper assembly back to mimic firing) and carried with the hammer back. To make this safe, a manual safety lever on the left side of the grip could be engaged, which would lock the trigger and the sliding frame both in place. 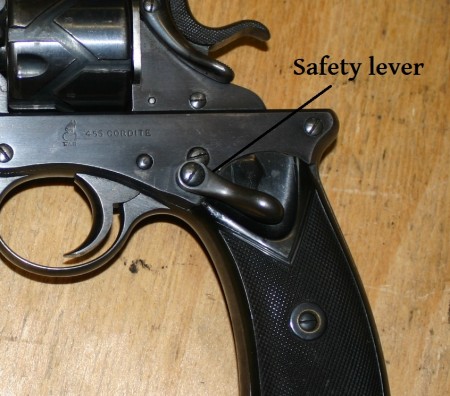 To empty spent cases and reload, the procedure was identical to a typical Webley revolver. A lever just to the left of the hammer would allow the action to break open (pivoting around the bolt located in front of and below the cylinder), and an automatic ejector would push out all the empty cases. Reloading a .455 model could be done one round at a time, or with a Prideaux speed-loader.

The Webley-Fosbery was available in two different cartridges; .455 and .38. It is often assumed that the .38 caliber guns used .38-200 (aka .38 S&W) ammunition, because this was the round used in standard .38 caliber Webley revolvers – but that assumption is incorrect. The .38-200 was not adopted by the British military until the 1920s, while the .38 ACP was a hot new item in the American market, having been introduced in 1900. It was this .38 ACP round that was used by the smaller caliber Webley-Fosberys, using 8-round moon clips (see cutaway diagram above). The design of those moon clips was a bit different than what we are used to seeing today, with a pointed spiral sort of shape. You can see the cut-out area in the cylinder for the clips in this factory nickel-plated example:

The more common caliber for the Webley-Fosbery was the .455 British service round, which did not use a clip. In that caliber, the weapon had a 6-round cylinder.

At the time of its introduction, British officers supplied their own sidearms, and were required only to use the standard cartridge, so more than a few chose to purchase .455 Webley-Fosbery automatic revolvers, although the gun was never formally adopted. The most common model was a 6″ barrel and blued finish, but Webley was willing to make the guns in several other configurations. One could buy the gun with a 4″ or 7.5″ barrel as well as the 6″, and they could also be supplied with multiple barrels for the enthusiast who wanted a target option as well as a more conveniently sized version to carry. Nickel finish was an option (not many produced this way, though). The longer target barrel were also set up with sights more styled for competition, as the Webley-Fosbery was noted as a quite effective competition gun at the time.

Overall production was approximately 4200 pistols, although serial numbers go to approximately 4500 (a few blocks of numbers were skipped), and the vast majority of these were in .455 caliber. Only 417 were originally produced in .38 ACP, and 141 of those were dismantled at the factory and used for parts. Another 72 (at least) were converted to .455 at the factory, and thus no more than about 200 left the shop – making the .38 caliber Fosbery pistols particularly valuable today. Given that the main market was military, this caliber discrepancy should not be particularly surprising.

Production ran from 1901 until 1924, generally at a rate of 10 guns per week, although there were periods where none were being made (such as during WWI, when production of standard Webley revolvers had much higher priority).

The Webley-Fosbery had a following of both target shooters and Army officers, but it was ultimately not hugely successful and is remembered today promarily because of its unique mechanism. The guns were used by British pilots before machine guns became commonplace aircraft armament and they served well enough in that capacity. They were used by infantry officers in WWI and worked fine as long as they were kept relatively clean, but the sliding recoil mechanism was prone to becoming incapacitated by dirt or debris.

The Webley-Fosbery was submitted to the US pistol trials of 1907, where it was rather quickly discarded as not offering any useful advantages to offset its bulk and susceptibility to fouling. Of course, the US trials stipulated a .45 caliber cartridge, so Fosbery’s original goal of improving on the 6mm and 7mm early pistol cartridges already met.