Of the three calibers available in the 1896 model Bergmann pistol, the 6.5mm No.3 was the most popular. Approximately 4,000 of these guns were produced, and they found a worldwide following. We have examples below of guns sold to Thailand and through the English Westley Richards company, for example.

The No.3 pistol was pretty much identical in concept to the 5mm No.2 Bergmann, but scaled up for the slightly larger 6.5mm cartridge. There were a few differences, which we will discuss in a moment. First, though, let’s take a look at the 6.5mm Bergmann ammunition. Like the 5mm variety, the 6.5mm was initially produced without an extractor groove, as the first several hundred No.3 pistols were made without extractors (see the article on the No.2 for more explanation of this). In addition to having a significant taper to the case body, the 6.5mm was also a bottlenecked design. Because of the popularity of the No.3 pistol, the ammo was manufactured by several companies – Wilson lists loadings by Eley, DWM, a company called Deutsche Metallpatronen Fabrik, and a couple not identified by maker. These ranged from DWM’s 65 grain bullet at 722fps (220 m/s) to an 81.7 grain bullet at 775 fps (236 m/s). Compared to other cartridges of roughly the same diameter like the 6.35mm Browning (.25 ACP), these were unusually heavy bullets, and thus unusually long. Consider that 80 grains was a standard bullet weight for the 7.63mm Mauser.

Wilson grants the 6.5mm Bergmann with “appreciable stopping power” (particularly with the lead bullets), and rates it much superior to the .25 ACP (which was not introduced until 1905). That may be setting the bar pretty low today, but it was a respectable achievement for a safe and reliable pocket pistol in 1896.

Bergmann was willing to accommodate quite a few design alterations, including different barrel lengths, different grips, and even things like set triggers for target shooting. Here, for example, is a target model of the No.3 in 6.5mm, complete with improved sights, a 7.25 inch long barrel, and set trigger:

Loading the No.3 was a process identical to the earlier pistol variants – see my article on the No.2 for details. The clips, of course, were larger to accommodate 5 rounds of 6.5mm ammo, and not interchangeable with other calibers of Bergmann.

On all the versions of the 1896 Bergmann you will find a maker’s mark showing a bearded miner holding a pickaxe. There are two versions of this mark, however. The basic one has just the miner inside an oval, and this was used on pistol manufactured at the Bergmanns Industriewerke. As time went on, though, Bergmann’s own factory began tooling up for automobile production as well, and Bergmann (ever the business-minded industrialist) outsourced production of pistols when he ran short of factory floor space. The company the built them on contract was V.C Schilling or Suhl, Germany (a name which will be recognized by anyone interested in German arms). The guns made by Schilling use the same miner emblem, but with “GUGGENAU” above his head and “V.C.S. SUHL” below his feet. As best I can tell, there is no particular difference in quality or mechanical detail between the two types.

There are references made in print to combination holster/stocks being available as a factory option for the No.3, but these are very rare.

I noted in my article on the No.2 Bergmann that virtually all of those that I have seen are marked “611” on the rear left side of the barrel. Well, the No.3 pistol exhibit a similar trend, with roughly 75% of the ones I have seen having a “278” stamped in that same location (the ones that do not have it are blank, not stamped with any other number there). Again, I do not know the significance of this, although it is seen on pistols with both the early and late type of barrel removal.

Now, how about some photos of different variances of the No.3? These pictures all come from the James Julia auction house, which sold a significant number of Bergmann pistols (from the Schroeder and Sturgess collections) in a September 2013 auction.

First, an early but otherwise typical No.3, with factory case: 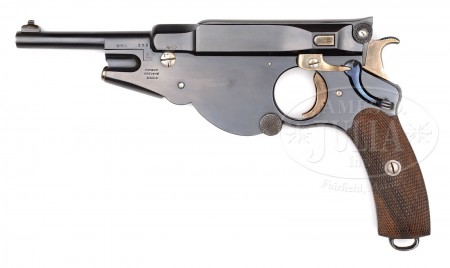 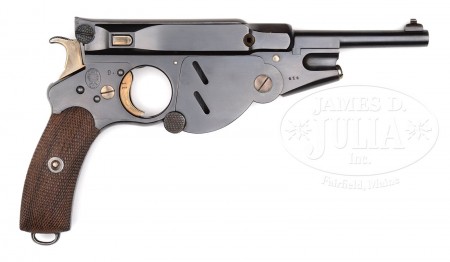 Next, an example with Thai markings and a groove in the backstrap for attaching a shoulder stock (the Thais seem to have been interested in stocked self-loading pistols, as they also bought a number of Grandpa Nambu pistols with stock attachments). This example is from mid-production with a serial number of 2485 and an extractor: 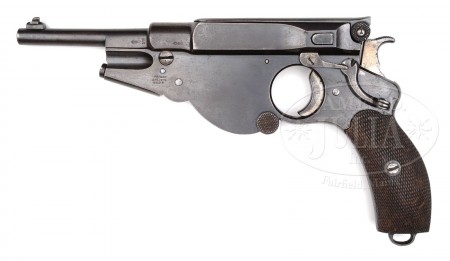 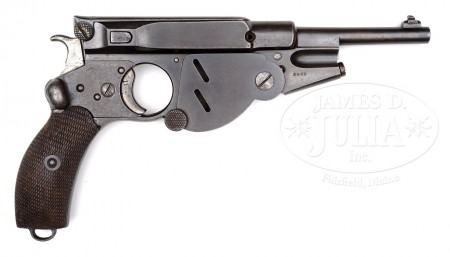 Next, a toolroom prototype of the No.3, serial number 46. The significance of the 3/8″ threaded hole below the barrel lug is unknown.

Next, another early No.3, this one being serial number 104. Interestingly, this one has a threaded barrel despite its very low number. 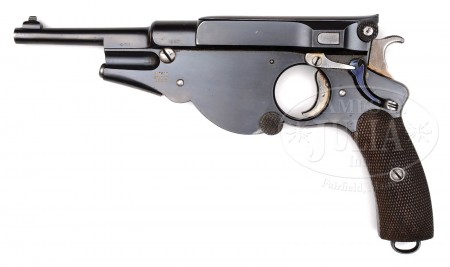 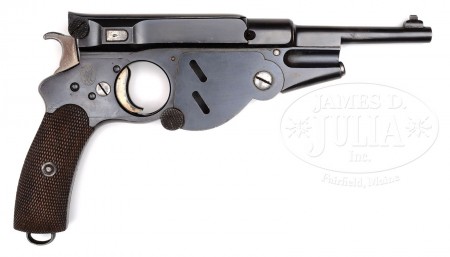 Next, another early No.3, This one serial number 106 (only two after the previous set of photos). This one has a much more prominent V.C. Schilling inscription, for an unknown reason. Perhaps it was made for retail resale by Schilling? 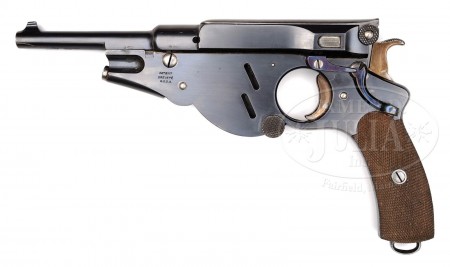 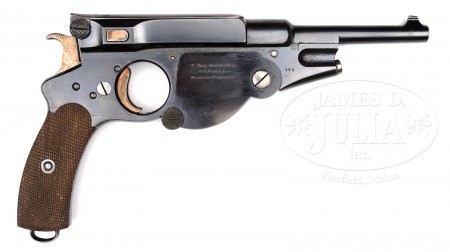 Lastly, we have a special target model No.3. Its non-standard features include a 7.25 inch barrel, adjustable target sights, a trigger guard spur, and set trigger. This is a relatively early gun – serial number 898 – but is late enough to have been made with an extractor. The set trigger is used by first pressing upward on the top lever in the trigger guard, which sets the bottom trigger to a very light pull weight.