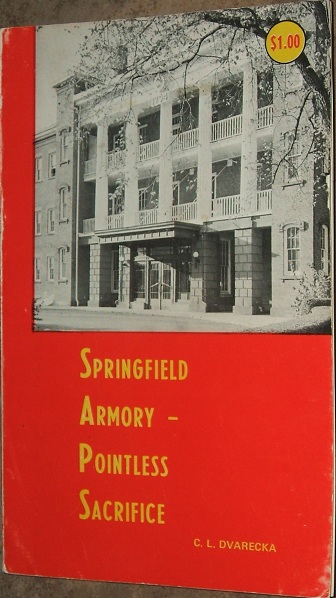 This When I came across this copy of Christopher L. Dvarecka’s Springfield Armory – Pointless Sacrifice, I was hoping for an interesting behind-the-scenes view of the operations of Springfield. Unfortunately, I quickly became dubious after reading the rear cover – where it describes the Armory as “forsaken by its ‘friends'” and “doomed because of its very excellence.” Not exactly the objective view I was hoping for, but you never know until you actually start reading.

As a quick bit of background for folks who may not be aware, Springfield Armory was the US’ oldest Armory, having been established at Springfield Massachusetts in 1794 (and been an Army powder magazine since 1777). It was responsible for manufacturing small arms for the US military, as well as aiding commercial contractors in production of the same. Through the 1800s, the Armory was a major part of American industrial development, and many of the country’s noted arms makers spent time in its employ before moving on to private endeavors. The Armory also conducted small arms R&D, it is was within its walls that rifles like the M1 Garand were developed. This all ended in 1968, though, when it was shut down in an effort to reduce costs, and most of its functions relocated to Rock Island Arsenal in Illinois (this shutdown is what the book’s title references). The Springfield Armory Inc selling guns today licensed the name in 1974, and has no other connection to the government Armory (including location, as the company is based in Geneseo, IL).

Anyway, back to the book. It was published in 1968 as the Armory was in the final stages of being shut down (a staged process that had begun in 1964), and it is a basic history of the Armory and a lament of its fate. The author, Colonel Dvarecka, was Historical Officer for the Armory and director of its museum from 1954 until 1968, and his anguish at its closing is certainly understandable (and I would have jumped at the chance to talk about the Armory’s history with him, but he passed away in 1993). However, it does seriously limit the book’s objectivity – closing Springfield may have been a terrible idea, but Dvarecka portrays it as a flawless example of everything America stands for. In reality, we know that there was plenty of strife, inefficiency, and flat-out bungling within its bureaucratic walls.

Think of Springfield Armory – Pointless Sacrifice as an extended obituary for the institution, which truly was an American icon. The first three quarters of its pages describe the history of the Armory, free of political subjectivity. For folks interested in the history of manufacturing, it makes a pretty good read, as the facilities transition from colonial workshop (complete with racks for the craftsmens’ jugs of rum) to a factory of the Industrial Revolution to a modern prototyping man fabricating facility. Over the decades it fluctuated between periods of inactivity (including nearly being shut down in 1878) and those of frenzied production (like the Civil War and both World Wars), slowly expanding and modernizing.

The work is long out of print, but can still be found on Amazon used. The price is right at the top end of what I would consider reasonable, primarily for people with an interest in manufacturing – it does not describe the specific guns made at the Armory in much depth at all. If you can find it for a couple bucks at a gun show, though, it is definitely worth getting to add that bit of niche information to your library. For those who don’t want to wait for that possibility, here is the Amazon link:

In addition to his work on designing a basic infantry shoulder rifle, Melvin Maynard Johnson and put a lot of effort into creating a light machine gun for US military forces to use. In terms […]

An excerpt from Guns on the Early Frontiers, on the subject of Spanish matchlock muskets in the colonial Americas: In 1576, a Captain Solis, commander of the Garrison at San Felipe, in the vicinity of […]

Turkish Manual for the Colt MG40

I recently found this in a private library, and I believe it’s the first Turkish-language manual I’ve come across. It’s dated 1936, and although the cover illustration shows a 1917 type water cooled gun, the […]